File:Treesgrovelands.jpg
One of the park's grassed areas.

Grovelands Park is a public park in Southgate and Winchmore Hill, London, that originated as a private estate. It is designated as Grade II* Listed, and is included in English Heritage's "at risk" register.

The mansion, which was initially called 'Southgate Grove', was built in 1797-98 to the designs of John Nash for Walker Gray, a Quaker brewer. The grounds were landscaped by Humphry Repton. In 1816 the building was described as being "a regular building of Ionic order, and presents a fine example of that beautiful style".[1] Lucinda Lambton has called the building an "idiosyncratically flounced, classical villa", and mentions that the owner bought much of the parkland to avoid the sight of other people's chimneys. She goes on to describe the interior: "Inside, there survives one of the most delicate delights in all London: Nash's octagonal dining-room, painted as if you are in a bamboo birdcage, looking our through the bars at the fields, woods and sky."[2]

After Gray's death the property was acquired by John Donnithorne Taylor (also connected to the Taylor Walker & Co Brewery), whose family continued to live at Grovelands up to World War I.[citation needed]

Part of the estate was purchased by the Municipal Borough of Southgate in 1913 to become a public park. The house is part of the Priory Clinic. In 1998, General Pinochet was held under house arrest initially in Grovelands House while a patient at the Priory Clinic.[3]

Listed and at risk

Grovelands Park was designated Grade II* Listed in October 1987,[4] and has been on English Heritage's "Heritage at risk register" since 2009. English Heritage describe the park as highly vulnerable with "significant localised problems" and the trend of further decline. English Heritage believe the issues are caused due to the fragmented management of the park due to the number of landowners. A "historic environment assessment" commissioned by the London Borough of Enfield in 2008, provided priorities and guidelines for landowners when carrying out "repairs and restoration".[5]

In 2013 Enfield Council revealed several concepts to improve the park, including refurbishing existing sports facilities, opening up disused land owned by Thames Water, and the provision of a new primary school.[6]

Enfield Council reassured residents that the park they currently have access to will not be built on or reduced in size. The council has stated that: "Options include locating the new school in the area near to existing tennis courts whilst restoring and extending the existing tennis provision which may involve an artificial turfed surface."[6]

The park comprises a wooded area with a pumped stream that flows from a lake to a gill, a grassed area including several football pitches and associated facilities, a children's playground and a pavilion. A small aviary was removed in the early 1990s.[citation needed]

Grovelands Park contains a bowls club, basketball courts, tennis courts, and a nine-hole pitch and putt golf course, which is open in the summer months. It also hosts a weekly Parkrun. In September 2013 the Borough of Enfield installed a green gym near to the children's playground, overlooking the lake.[citation needed] 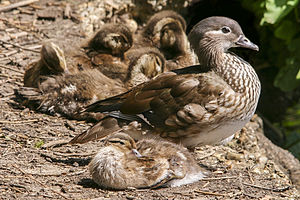 A dangerous algal bloom formed on the lake in the late 1990s.[citation needed]

When the lake was drained to install a new pumping and drainage system to curb flooding problems, a large number of terrapins were found to be living in the lake. The terrapins were believed to be the descendants of discarded pets that were able to survive and breed. Feral terrapins are a recurring problem in many London waterways.[7]