Grundy County has a rich history and today is the home of a vast recreational wilderness known as the South Cumberland State Park which offers extensive hiking, camping, and rock climbing. Most of Grundy County is atop the Cumberland Plateau averaging a height of around 1800 feet above sea level. Many locations in the county offer beautiful vistas and grand waterfalls. The county seat of Grundy County is Altamont, TN, founded in the 1840s. Thirty years before the Civil War, the resort town of Beersheba Springs, TN was founded around a natural mineral springs near the current site of a popular wilderness area known as the Savage Gulf. Visitors to the Savage Gulf are amazed by the beautiful views and extensive hiking trails. In the mid-1860, the town of Gruetli-Laager, TN was formed by an immigrant population from Switzerland. Today many of the original family names are found amongst the local population. Today many people, on their way to Fiery Gizzard and Foster Falls, will pass through the quaint and friendly town of Tracy City, TN. Tracy City is home to the Grundy County Historical Society which is located in the Tennessee Consolidated Coal Company Library & Research Center and is staffed daily by many local residents who assist visitors with tours of the museum and offer assistance for genealogical research. Near by Tracy City many visitors enjoy Grundy Lakes. The Grundy Lakes Park surrounds a series of mountain lakes and streams. The park offers swimming, picnic areas and a lengthy paved road used by runners and walkers. The lake is bordered by a honey comb of Coke Ovens that remain from when coal was mined in the area. 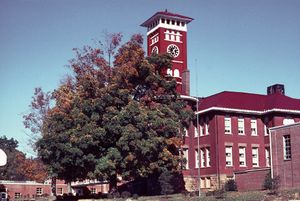 James K. Shook School is but one of many buildings to succumb to arson in Grundy County.

In the 20th century, Grundy County earned a reputation for arson. The business district of Tracy City was nearly destroyed when ten buildings were wiped out by an intentional blaze on April 27, 1935. The Tracy City L&N Depot combusted after a century on August 24, 1971. The sheriff reported 21 other fires, mostly arson, prior to that in 1971 alone. After 86 years, James K. Shook School burned to the ground circa May 1976. Offices of newspapers have not been spared, either. The Grundy County Times was set ablaze in 1917, and the Herald office suffered an explosion in 1967 and was destroyed by arson in 1978. After 105 years standing, the Grundy County Courthouse was destroyed by arson on May 3, 1990.[6]

Some vandals appear to favor dynamite. In the 1960s and 1970s, four dynamite blasts destroyed or damaged waterworks, another a lumber yard, and another a doctor's clinic. Such was the problem at abandoned county schools that insurance was difficult to obtain. Glenn Bonner, school superintendent at the time, said, "Just as soon as a building becomes vacant — boom!"[6]

When asked about these crimes and others, Tennessee Bureau of Investigation's Bill Thompson downplayed the blazes saying, "I'm not going to say that Grundy County is any different than any other rural county. There are a ton of good people there."[6]

Grundy County contains much of the Fiery Gizzard Trail, renowned for scenic beauty and diversity.[8]

Wonder Cave is located on the north side of Layne's Cove at the foot of the Cumberland Plateau. It was discovered in 1897 by Robert A. Nelson, Melville Anderson, and Will Fitzgerald, who crawled into a small opening next to a large, well-known spring. In 1898 the cave was purchased by R. M. Payne who enlarged the small opening, built trails, and opened the cave to the public as a commercial cave. Wonder Cave was a major tourist attraction for nearly 80 years, but construction of the Interstate Highway system diverted tourists away from the old, main highway, Highway 41, and the cave eventually closed.[9] 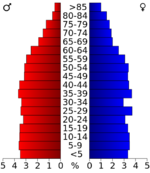