From Infogalactic: the planetary knowledge core
(Redirected from Gruppen (Stockhausen))
Jump to: navigation, search
File:Stockhausen Gruppen für drei Orchester series.png
Example 12 from Stockhausen's article "... wie die Zeit vergeht ...", illustrating with a version of the series from Gruppen fur drei Orchester that, "if you start from the intervals of a proportion series, then with every step forward the register of each duration is also already chosen" (Stockhausen 1963b, 117). There are "a number of basic durations, indicated in metronome marks and corresponding with the pitch proportions within the series, reaching far as the octave positions (basic duration units)" (Leeuw 2005, 174), or "a duration scale which changes its 'time register' ... corresponds to a twelve-tone scale that extends over more than one octave" (Misch 1998, 157–58)

Gruppen (German: Groups) for three orchestras (1955–57) is amongst the best-known compositions of German composer Karlheinz Stockhausen, and is Work Number 6 in the composer's catalog of works. Gruppen is "a landmark in 20th-century music . . . probably the first work of the post-war generation of composers in which technique and imagination combine on the highest level to produce an undisputable masterpiece" (Smalley 1967, 794). 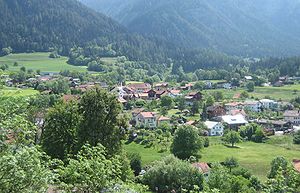 Paspels, the village where Stockhausen began work on Gruppen.

Early in 1955 Stockhausen received a commission from WDR for a new orchestral composition, but his ongoing work on Gesang der Jünglinge prevented him from starting right away. In August and September, he took the opportunity to retreat to an inexpensive rented room in the attic of a parsonage in Paspels, Switzerland, recommended to him by a colleague, Paul Gredinger. Surrounded by the splendour of the Graubünder alps, he created the entire plan of Gruppen, "with a completely new conception of musical time" (Stockhausen and Frisius 1989, 320). The surroundings provided more than just a conducive environment for work.

in Gruppen ... whole envelopes of rhythmic blocks are exact lines of mountains that I saw in Paspels in Switzerland right in front of my little window. Many of the time spectra, which are represented by superimpositions of different rhythmic layers—of different speeds in each layer—their envelope which describes the increase and decrease of the number of layers, their shape, so to speak, the shape of the time field, are the curves of the mountain's contour which I saw when I looked out the window. (Cott 1973, 141)

Upon returning to Cologne, Stockhausen resumed work on Gesang der Jünglinge and then composed the wind quintet Zeitmaße and Klavierstück XI, before turning to working-out the details of Gruppen, which occupied him for all of 1957. The premiere of the work took place in the Rheinsaal of the Kölner Messe in Cologne-Deutz, as part of the WDR's concert series Musik der Zeit, on 24 March 1958 with the Cologne Radio Symphony Orchestra, conducted by Stockhausen (orchestra I), Bruno Maderna (orchestra II), and Pierre Boulez (orchestra III). The score is dedicated to Herbert Eimert, director at that time of the WDR electronic music studio (Stockhausen 1971, 22). Gruppen was performed twice on the programme, with the world premiere of Pierre Boulez's Third Piano Sonata, performed by the composer, in between (Misch 1998, 176n13).

A large orchestra of 109 players is divided into three orchestral units, each with its own conductor, which are deployed in a horseshoe shape to the left, front, and right of the audience. The spatial separation was principally motivated by the compositional requirement of keeping simultaneously played yet musically separate passages distinct from one another (Kurtz 1992, 80), but led to some orgiastic passages in which a single musical process passes from one orchestra to another.

The title refers to the work's construction in 174 units, mainly composed in what Stockhausen terms "groups"—cohesive groupings of notes unified through one or more common characteristics (dynamics, instrumental color, register, etc.): "a particular number of notes which are joined, by means of related proportions, into a superordinate experiential quality (namely, the group). The various groups in a composition have various proportional features—various structures—but they are interrelated in that the properties of one group may only be understood by comparing them in degree of relationship with the other groups" (Stockhausen 1963a, 63). This category is contrasted with the "punctual" style of early Darmstadt serialism, which nevertheless also occurs in Gruppen, along with a third category of "collective" or "statistical" swarms or crowds, too dense for the listener to be able to accurately distinguish individual notes or their order of succession (Stockhausen 1963c, 250–51). Consequently, the importance of individual notes is relatively low, so that sonority, density, speed, dynamics, and direction of movement become the main features for the listener (Smalley 1967, 795).

Nonetheless, a traditional twelve-tone row is used as its basis:

This is a symmetrical all-interval row, in which the first half consists of the intervals of a descending major third, rising perfect fourth, descending minor third, descending minor second, and ascending major second. The second half consists of the retrograde of the first half, transposed by a tritone (Misch 1998, 161). In other words, the row is "degenerate", in that the second hexachord is a retrograde of the first, transposed by six semitones. However, Stockhausen does not exploit the specific twelve-tone compositional applications of such a row, which suggests that either Stockhausen was not interested in or did not know about them (Harvey 1975, 56–57). Because of the chord transformations that emerge between rehearsal numbers 118 and 120 it appears that Stockhausen was in fact aware of these properties, making it most likely that the relationship simply did not interest him compositionally (Kohl 2004, 122–23).

Many of the conceptual bases of the work are explained in Stockhausen's famous article, "... How Time Passes ..." (Stockhausen 1963b). In this essay, Stockhausen developed a serial organizational principle at the center of which stood the concept of a twelve-step duration series possessing the same structural properties as the basic twelve-tone pitch series. This became the basis for the entire process of serial organization of Gruppen (Misch 1999, 53–54). This duration series, however, is expressed not as single units (which would correspond to single vibrations of a pitch) but rather as metronomic tempos in sufficiently long stretches of time to enable conductors and musicians to change tempo with precision. However, because the resulting "fundamental durations" are not small enough for use in the musical detail, subdivisions corresponding to the transposition of the overtones of a pitch's harmonic spectrum are used (Koenig 1968, 90–91).

The twelve logarithmic metronomic tempos used in Gruppen, covering a tempo "octave" (doubling in speed) from

The composer recalled that, when Igor Stravinsky saw the score for the first time, he wrote that such fractional metronomic values as 63.5 and 113.5 were "a sign of German thoroughness" (Stockhausen 2009, 169).

In chronological order of first issue.