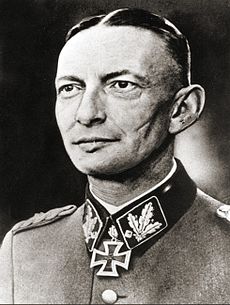 Gruppenführer (literally "group leader") was an early paramilitary rank of the Nazi Party, first created in 1925 as a senior rank of the SA.[1]

In 1930, Gruppenführer became an SS rank and was originally bestowed upon those officers who commanded SS-Gruppen and also upon senior officers of the SS command staff. In 1932, the SS was reorganized and the SS-Gruppen were reformed into SS-Abschnitte. A Gruppenführer commanded an SS-Abschnitt while a new rank, that of Obergruppenführer, oversaw the SS-Oberabschnitte which were the largest SS units in Germany.[2]

The insignia for SS-Gruppenführer consisted of three oak leaves centred on both collars of an SS uniform. From 1930 to 1942, the SS insignia was the same as the SA badge of rank; however the SS modified the Gruppenführer insignia slightly to include a collar pip (stern, a star), upon the creation of the rank SS-Oberst-Gruppenführer in April 1942.[3]

A Gruppenführer was typically in charge of a number of SA regiments (known as Standarten) which were formed into SA-Gruppen.[1] Upon its original conception, Gruppenführer was considered equivalent to a full general. This later changed to where the rank was considered to be equal to a Generalleutnant in the Heer (army) and a major general in other western countries.

The rank of Gruppenführer was also used in several other Nazi paramilitary groups, among them the National Socialist Motor Corps (NSKK) and the National Socialist Flyers Corps (NSFK). In 1944, the rank of Gruppenführer was adopted by the Volkssturm as a low level non-commissioned officer position in charge of squad sized formations (Gruppe) of Volkssturm soldiers.

The term is also a generic term for the function of a leader of a squad of infantry (9 or 10 men – Gruppe) in the German Army, Waffen SS, or Luftwaffe ground troops.

Gruppe was also used in a variety on other ways. In the Luftwaffe as a grouping of Staffeln (squadrons) either independent of as the sub-division of a Geschwader. It was also used for ad hoc army formations.