Guérande (French pronunciation: ​[ɡeʁɑ̃d]; Breton: Gwenrann) is a medieval town located in the département of Loire-Atlantique in western France. The inhabitants are referred to as Guérandais, for men, and Guérandaise, for women.

The Guérande Peninsula overlooks two contrasting landscapes: the "Pays Blanc" (White Land), because of its salt marshes, and the "Pays Noir", with the Brière peat bog.

Since 2004, the medieval town of Guérande has been a member of a national network of 120 towns, the Villes et Pays d'Art et d'Histoire (Towns and Regions of Art and History). The fortified wall of Guérande is one of the best preserved and complete in France. Its circumference stretches 1434 meters.

The Guérande Peninsula is surrounded by water. It stretches out from the Atlantic Ocean (West) to the Brière Regional Nature Reserve (East), and from the river Vilaine (North) to the Loire's estuary (South).

Guérande is in the heart of the peninsula called "Presqu'île guérandaise", along with other towns, such as La Baule, Le Croisic, Pornichet, Batz-sur-Mer, Le Pouliguen, or Piriac.

According to the classification established by the INSEE in 1999, Guérande is now classified as an urban district, 1 out of 9 forming the urban area of Saint-Nazaire.

About half of the remaining megalithic monuments of the Département Loire-Atlantique, is located on the Peninsula, which makes it an important area for Prehistory. It is now known that these structures date from around 5200-2200 BC.

At the end of the Iron Age, the Peninsula was occupied by 2 tribes:

The many artifacts from the Gallo-Roman age demonstrates that Guérande had been home to many groups.

The area was evangelized in the 3rd century by St. Clair, the first Bishop of Nantes.

The Bretons of the prince of “Vannes” (Waroch II (577-594)) may have built the first parish. Waroch is supposed to have created a baptistery in place of the actual choir of the collegiate church “Saint-Aubin”.

Around 848, under the reign of Nominoe, 1st Duke of Brittany, the city became the head of a temporary bishopric. Salomon ("Selyfan", "Salaun", "Tudwal Mwyn Fawr", "2nd Duke of Brittany", "857–874",) built a canon college that was a benefit to the city's development. At the turn of the second millennium, a fortified town was built and a political and administrative organization could be established thanks to the existing castle.

During the Middle Ages, the town had a very rich history, with many important events. It was also the capital of the Pays Guérandais, an ancient region of the Duchy of Brittany.

In 1343 during the Breton War of Succession, following Guerande's capture by French troops commanded by Charles of Blois, approximately 8000 inhabitants were massacred in Guerande's streets, burned in their homes or in the Church of Saint Aubin.

Jean of Montfort,(John IV) Duke of Brittany, demanded that the town be properly protected, by improving its fortifications. Work started soon after and continued for more than a century, with the town's architecture adapted to reflect the latest developments in siege and artillery.

At the end of the Breton War of Succession, peace was finally concluded before the high altar of Saint Aubin, (Albinus of Angers) on Holy Saturday in 1365. In this the first Treaty of Guérande, Joanna of Penthièvre abdicated her disputed claims to the Dukedom in favour of John V of the House of Montfort. A modified form of Salic law was introduced in Brittany as a result.

The second Treaty of Guérande (1381) established Brittany's neutrality in the Anglo-French conflict, and was accorded between John V and Charles VI, King of France.

It was not until 1488, or 145 years later, that the ramparts, by then complete, were inaugurated during the reign of Francis II, Duke of Brittany (father of Anne of Brittany), only a few months before his death. The old walled town (known in French as vieille ville) is surrounded by nearly intact ramparts and has four fortified gates (the largest of which is a 15th-century châtelet known as Porte Saint-Michel) as well as ten towers.

Guérande was visited regularly by Breton rulers such as Duchess Anne of Brittany. In 1532, upon the marriage of Anne of Brittany to Charles VIII of France, Brittany (and with it the pays of Guerande) became unified with the French Kingdom.

In the late Middle Ages, the city was regularly visited by merchants from Rouen who came to buy salt.

During the 17th and 18th centuries, the city was transformed, with bourgeois houses in granite replacing the houses of the 15th and 16th centuries. In 1686, at the Saint-Aubin public place, a new building was built called Les Halles; which was notable for its large auditorium. These mansions and houses represent about 50% of the buildings still visible today in the sector called the intra muros.

In 2008, 2.02% of the children attended bilingual schools (in French and Breton) in primary education.[1] 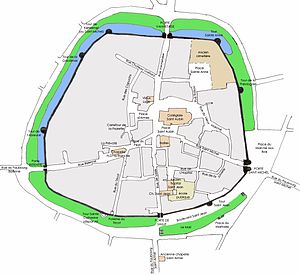 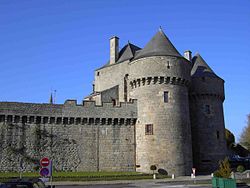 The names of the four gates are:

The ramparts are not the only element of defense of the old city. Also found are:

One of the main sites of interest in the medieval town.

Very little is known about the succession of religious buildings on the site of the original baptistery built by Prince Waroch. Dedicated to Saint Aubin, Bishop of Angers in the 6th century and a native of the peninsula, the church became a collegiate church in the 9th century following the foundation of a chapter of canons attributed to King Salomon. It was rebuilt in about 1200, and the Romanesque pillars in the nave are evidence of that work.

Very badly damaged during the Breton Wars of Succession, the Collegiate Church was restored in time for the signature of the first peace treaty in 1365. Various building projects succeeded one another until the 18th century, improving and adding new features: choir and chevet (15th–16th centuries), Baroque altarpieces and stalls (17th century). But hardly had this work been completed, than the church found itself in the midst of the French Revolution. It suffered little damage, other than to the windows. However, the Revolution led to major structural changes, since, in 1792, the status of Collegiate Church was abolished and the canons exiled to Spain.

In 1840, following the creation of the National Historical Monuments commission, the church's true value was realised and it was listed. The works undertaken by the architect Bourgerel were overly ambitious and caused the collapse of the west front in 1876. It was Eugène Boismen who was charged with reconstructing it in the original style.

Monuments of the outer suburbs

Local tradition tells the story of a peasant named Yves Herbic,who was very poor. At daytime, he would work for his lord. At night, he would cultivate his own small piece of land. He sowed wheat but this didn’t bring in enough money to pay the rent that the lord demanded. Therefore, he decided he had to build his own mill, but he couldn’t do it alone. The Devil offered him a deal. Yves agreed to give his soul to the Devil in exchange for the mill. His wife was not pleased about that deal but she didn’t know Yves had a cunning plan. Yves watched the Devil closely while he was building the mill. At the last moment the Devil finished building the mill, Yves placed a statue of the Virgin Mary on top of it. The Devil vanished instantly into thin air and never returned. Yves got his mill and kept his soul.

The salterns of Guérande is a swamp of salt water about 1 700 hectares in size. The current saltmarshes began before the 9th century and lasted for several centuries. Around the year 1500, the marshes reached 80% of the current surface. The latest were built around 1800. In the middle of the 19th century, a gradual decline started for different reasons : competition from a salt mine, lower consumption of salt as a product of conservation and improvement of transport by land. The salt of Guérande used to be traded throughout Brittany, tax free until Emperor Napoleon Bonaparte decided to tax it resulting in the beginning of a decline of salt activity.

Certain parts of the swamps and "Traict" are classified as a Nature Reserve (major stage for migratory birds) and is managed by the Conservatoire du Littoral. The "Traict" and swamps have also been classified as "site Natura" since 2000. These swamps have also been registered since 1971 on the list of protected wet-lands under the Ramsar Convention.

The salterns of Guérande, include two salicoles ponds:

They are a part of the salterns of the Atlantic Ocean, more than three-quarters of them, found in the Gironde and the peninsula of Quiberon.

Salterns are sites where the salt workers collect approximately 15 000 tons of cooking salt a year, and approximately 300 tons of Fleur de sel or flower of salt. A cooperative promote quality with a label (the French Label rouge). Today around 250 workers live on the salt marshes. These salterns are also classified as "remarkable Sites of taste". The principle is simple. Channels that feed the water reservoirs with sea water, use the tides. Salty water then evaporates in different dams till there are only a few centimeters of sea water left. The last step is where the salt crystallizes and produces the fleur de sel and coarse salt.

This is one of the first natural parks to be listed as a “Parc Naturel Régional” in 1970.

This small village between Guerande and La Turballe has many typical houses of salt workers. There are many monuments of interest such as the Sainte-Catherine church (built during the 15th century), Requer's Cross (listed building in 1944) as well as parts of an old Roman wall.

This village is situated in the heart of salt marshes. Like Clis, there are many typical houses of salt workers.

This village is famous for its castle.

A typical village in the swamps of La Brière.

The Balzac novel Béatrix is set in Guérande, concerning Calyste, son of the Baron de Guenic, and his relations with characters based on George Sand, Franz Liszt, and Marie d'Agoult.

Occurs in early August each year. This festival crosses multiple origins and styles of dance music, traditional singing tales, from the most authentic blend of culture forms.

Occurs in May each year. This fete takes Guerande back in time to the fourteenth and fifteenth centuries, with an intramural market and medieval fair, with medieval encampments, taverns, equestrian events, live music, theater, juggling and children's entertainment. More than 500 guerandais volunteers dress to the theme. There is grand costume parade on the Sunday morning.