Guadix, a city of southern Spain, in the province of Granada; on the left bank of the river Guadix, a sub-tributary of the Guadiana Menor, and on the Madrid-Valdepeñas-Almería railway. It occupies part of an elevated plateau among the northern foothills of the Sierra Nevada.

The city was once famous for its cutlery; but its modern manufactures (chiefly earthenware, hempen goods, and hats) are inconsiderable. It has some trade in wool, cotton, flax, corn and liqueurs. The warm mineral springs of Cortes y Graena, much frequented during the summer, are 6 miles west.

Guadix el Viejo, 6 km northwest, was the Roman Acci (also Accitum) mentioned in Pliny's Natural History and as Akki by Ptolemy, who placed it among the Bastetani, whose capital was Basti. It is not known for certain whether it is of Phoenician or of early Spanish origin. According to Macrobius, the primitive inhabitants paid homage to Mars under the name of Neton. Julius Caesar established the Roman colony called Julia Gemella. According to tradition, it was the seat of the first bishopric in Hispania, in the 2nd century.

After 711 it rose to some importance as a Moorish fortress and trading station, renamed Wadi 'Ashi ("the Wadi of Acci").[1] During this period, Guadix was home to Ḥamda bint Ziyād, one of medieval Andalucia's foremost women poets. Guadix was the site of the Battle of Guadix in January 1362 in which a small Castilian army was routed by the forces of Muhammed VI, Sultan of Granada.[2] It was surrendered without a siege to the Spaniards, under Ferdinand and Isabella, in 1489.

The novelist Pedro Antonio de Alarcon, author of El Sombrero de Tres Picos (The Three-cornered Hat) was born in Guadix in 1833. The 19th and 20th centuries saw a period of economical crisis for the town. Currently Guadix is a center of production of fruit (strawberries), cereals, vegetables, as well as a minor tourist center. 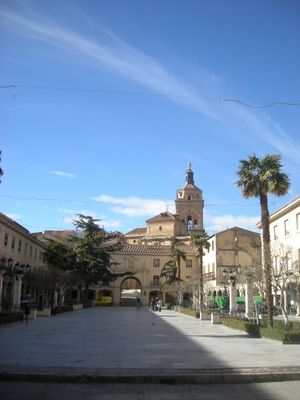 Guadix is twinned with: