Guildhall School of Music and Drama

The Guildhall School of Music and Drama is an independent music and dramatic arts school which was founded in 1880 in London, England. Students can pursue courses in Music, Opera, Drama and Technical Theatre Arts. The modern Guildhall School is the only major European conservatoire which is both a music school and a drama school, and one which is involved in technical theatre, professional development and music therapy.[3]

The School currently numbers almost 900 students, approximately 700 of whom are undergraduate and postgraduate music students and 175 on the Acting and Technical Theatre programmes. In any given year, about 40% of the students are from outside the UK, typically representing over 50 nationalities.[3]

The current chairman of Guildhall is David Andrew Graves (Alderman), elected a governor in 2009 he quickly excelled to deputy of the board to chairman by 2012. Guildhall’s principal is Professor Barry Ife. He has made the Guildhall School the UK’s single largest provider of music education to under 18s by incorporating the Centre for Young Musicians (CYM) and creating new music ‘hubs’ in Norfolk and Somerset; he has achieved recognition for Guildhall’s music outreach and opera programmes through two Queen’s Anniversary Prizes (2005 and 2007); and he has realised the School’s long-held ambition to build additional facilities at Milton Court (opened September 2013), including performance venues, rehearsal and teaching spaces.[4]

Most recently, Professor Ife led the Guildhall School’s application for Taught Degree-Awarding Powers, which were granted by the Privy Council in April 2014.[4]

The Guildhall School is the lead institution for the Innovative Conservatoire project.

The Guildhall School of Music first opened its doors on 27 September 1880, housed in a disused warehouse in the City. With 62 part-time students, it was the first municipal music college in Great Britain. The School quickly outgrew its first home, however, and in 1887 it moved to new premises in John Carpenter Street in a complex of educational buildings built by the Corporation of London to house it and the City's two public schools.

The new building was completed by 9 December 1886 and the then Lord Mayor of London, Sir Reginald Hanson attended the opening ceremony. Teaching continued under the first Principal of the School, Thomas Henry Weist Hill and his team of 90 professors. 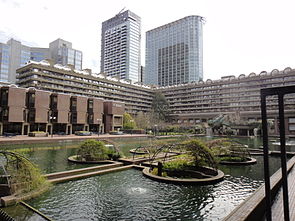 Guildhall School inside the Barbican Estate

The new site, designed by architect Sir Horace Jones, comprised a Common Room for Professors and 45 studios, each surrounded by a 1 one foot thick layer of concrete to 'deaden the sound'. Each room contained both a grand piano and an upright piano. Additionally, there was an Organ room and a 'Practice' room, in reality a small concert hall which was used for orchestral and choir rehearsals. The 'Practice' room was also the venue for the fortnightly School concerts

Initially, all tuition was on a part-time basis, but full-time courses were introduced by public request in 1920. Departments of Speech, Voice and Acting were added and by 1935 the School had added "and Drama" to its title.

In 1993 the Corporation of London leased a nearby courtyard of buildings that in the 18th century had been the centre of Samuel Whitbread's first brewery, and renovated and converted this to provide the School with its Hall of Residence, Sundial Court. About three minutes' walk from the School, Sundial Court offers self-catering single-room accommodation for 178 students.

In 2001 the Secretary of State, Baroness Blackstone, announced that the Barbican Centre, including the Guildhall School, was to be Grade II listed.

The school currently numbers over 800 students on its roll call, approximately 700 of whom are undergraduate and postgraduate music students. At the present time, 135 are studying on the Acting and Technical Theatre programmes. In any given year, about 40% of the students are from outside the UK typically representing over 40 nationalities.

The school is a member of Conservatoires UK, of Drama UK and of the European Association of Conservatoires. It also recently formed a creative alliance with its neighbours the Barbican Centre and the London Symphony Orchestra to create the world’s leading centre for performance, training and education in the performing and visual arts.

In 2005 the school was awarded the Queen's Anniversary Prize for its unrivalled development and outreach programme, Guildhall Connect, and in 2007 it won a further Queen's Anniversary Prize in recognition of the work of the Opera Programme over the last two decades. The School was rated No. 1 specialist institution in the UK in the Guardian University Guide 2013 and 2014.

The most significant investment in the Guildhall School’s future came to fruition via the £90 million redevelopment of the neighbouring Milton Court site. The new building, which opened in autumn 2013, houses three new performance spaces: a concert hall (608 seats), a theatre (223 seats) and a studio theatre (up to 128 seats) in addition to drama teaching and administration spaces.[5]

The school offers both undergraduate and graduate degree programs[6] as well as the Junior Guildhall, a Saturday school serving students from 4 to 18 years of age.[7] The school's outreach activities won the Queen's Anniversary Prize in 2005. The school was awarded a further Queen's Anniversary Prize in 2007 in recognition of the outstanding achievements and work of the Opera Programme.[8]

The school's performance facilities include a 308-seat drama and opera theatre, concert hall, lecture/recital hall and a small studio theatre. In addition, students of the school regularly perform in other London venues, including the Barbican Centre, the Bridewell Theatre (off Fleet Street), the Soho Theatre, the Royal Court and the Swan (Stratford).

In August 2014 The Guildhall had a logo change, to a more minimalist modern style. It was changed due to the school feeling that it needed something to reflect the types of teachings going on there. As they have the most up to date and modernised drama curriculum in the Conference of Drama Schools.

The Guildhall offers Undergraduate and Postgraduate courses in both Music and Drama, summer and holiday courses in both, as well as a junior program for students from the age of four.

Students perform regularly each year, as well as graduate performances at The Barbican Centre.[9] The Guildhall is known for attracting extremely talented guest directors such as Patsy Rodenburg and Iain Burnside.

For a list of alumni, see :Category:Alumni of the Guildhall School of Music and Drama.

See also: Gold Medal of the Guildhall School of Music and Drama

Some notable alumni of the School of Drama include:

Noted early musician and arranger Philip Pickett was both a student and later freelance teacher at the school, from 1972 to 1997.

It was revealed at his later trial, that allegations against Picket went back formally to 1984,[10] with current first incidents occurring from the late 1970s. In 1984, a family complained to the school about Pickett attacking their 17-year-old daughter, were told by the school that she should have her lessons elsewhere as no one else had complained.[10]

After the Savile revelations of 2013, a former student of Pickett's was referred by Suffolk Police to the specialist investigation team within the City of London Police. The woman, who was 16 in 1978, later testified that during a recorder lesson at the school that Picket had got to take her top off and lay down in a darkened practise room to "improve her breathing".[10] The following week her repeated the exercise, during which he sexually assaulted her, and the following week raped her.[10] Police first arrested Pickett on 4 December 2013,[11] after which further victims came forward. During their investigation, police discovered what presently appears to be Pickett's first victim, a then 21-year-old women whom he drugged and then raped in a similar pattern during a music lesson in a darkened practise room at the school.[10] Police further discovered written evidence from within the archives of the school, such as when on 20 March 1984 then-principal John Hosier had written to Pickett, in which he described his frustration that Pickett had not arranged to see him to discuss the allegations.[10] Hosier resultantly passed police a letter re the allegations and his frustrations, but the following year the Guildhall School made Pickett a fellow.[12]

On 10 February 2015 Pickett was found guilty of two rapes and two indecent assaults, carried out in soundproof rooms at the school between 1979 and 1983. Judge Charles Wide sentenced Pickett on 20 February 2015 for a total of 11 years.[13] Judge Wide ordered that two further indictments in relation to allegations by two women dating back to the 1970s lie on file. Pickett was cleared of six further counts of indecent assault.[10][12]

A spokesperson from the Guildhall school commented:[10]