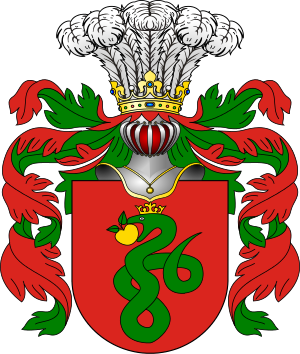 Apollinaire is considered one of the foremost poets of the early 20th century, as well as one of the most impassioned defenders of Cubism and a forefather of Surrealism. He is credited with coining the term "Cubism"[1] in 1911 to describe the emerging art movement, the term Orphism in 1912, and the term "Surrealism" in 1917 to describe the works of Erik Satie. He wrote poems without punctuation attempting to be resolutely modern in both form and subject.[2] Apollinaire wrote one of the earliest Surrealist literary works, the play The Breasts of Tiresias (1917), which became the basis for Francis Poulenc's 1947 opera Les mamelles de Tirésias.

Influenced by Symbolist poetry in his youth, he was admired during his lifetime by the young poets who later formed the nucleus of the Surrealist group (Breton, Aragon, Soupault). He revealed very early on an originality that freed him from any school of influence and made him one of the precursors of the literary revolution of the first half of the 20th century. His art is not based on any theory, but on a simple principle: the act of creating must come from the imagination, from intuition, because it must be as close as possible to life, to nature, to the environment, and to the human being.

Two years after being wounded in World War I, Apollinaire died during the Spanish flu pandemic of 1918 and was declared "Dead for France" (Mort pour la France) because of his commitment during the war.[3]

Apollinaire (left) and André Rouveyre in 1914 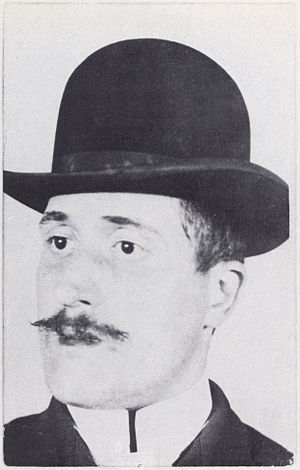 Wilhelm Albert Włodzimierz Apolinary Kostrowicki was born in Rome, Italy, and was raised speaking French, Italian, and Polish.[4] He emigrated to France in his late teens and adopted the name Guillaume Apollinaire. His mother, born Angelika Kostrowicka, was a Polish noblewoman born near Navahrudak, Grodno Governorate (present-day Belarus). His maternal grandfather was a general in the Russian Imperial Army who was killed in the Crimean War. Apollinaire's father is unknown but may have been Francesco Costantino Camillo Flugi d'Aspermont (born 1835), a Graubünden aristocrat who disappeared early from Apollinaire's life. Francesco Flugi von Aspermont was a nephew of Conradin Flugi d'Aspermont (1787–1874), a poet who wrote in ladin putèr (an official language dialect of Switzerland spoken in Engiadina ota), and perhaps also of the Minnesänger Oswald von Wolkenstein (born c. 1377, died 2 August 1445; see Les ancêtres Grisons du poète Guillaume Apollinaire at Généanet).

Apollinaire eventually moved from Rome to Paris[5] and became one of the most popular members of the artistic community of Paris (both in Montmartre and Montparnasse). His friends and collaborators in that period included Pablo Picasso, Henri Rousseau, Gertrude Stein, Max Jacob, André Salmon, André Breton, André Derain, Faik Konitza, Blaise Cendrars, Giuseppe Ungaretti, Pierre Reverdy, Alexandra Exter, Jean Cocteau, Erik Satie, Ossip Zadkine, Marc Chagall, Marcel Duchamp and Jean Metzinger. He became romantically involved with Marie Laurencin, who is often identified as his muse. While there, he dabbled in anarchism and spoke out as a Dreyfusard in defense of Dreyfus's innocence.[6]

Metzinger painted the first Cubist portrait of Apollinaire. In his Vie anecdotique (16 October 1911), the poet proudly writes: "I am honoured to be the first model of a Cubist painter, Jean Metzinger, for a portrait exhibited in 1910 at the Salon des Indépendants." It was not only the first Cubist portrait, according to Apollinaire, but it was also the first great portrait of the poet exhibited in public, prior to others by Louis Marcoussis, Amedeo Modigliani, Mikhail Larionov and Picasso.[7] 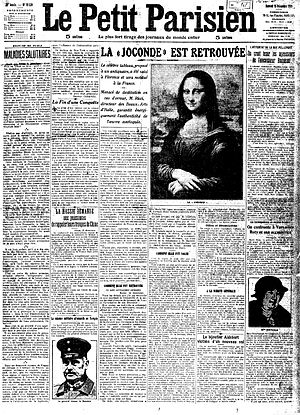 In 1911 he joined the Puteaux Group, a branch of the Cubist movement soon to be known as the Section d'Or. The opening address of the 1912 Salon de la Section d'Or—the most important pre-World War I Cubist exhibition—was given by Apollinaire.[8][9]

On 7 September 1911, police arrested and jailed him on suspicion of aiding and abetting the theft of the Mona Lisa and a number of Egyptian statuettes from the Louvre,[4][10] but released him a week later. The theft of the statues had been committed in 1907 by a former secretary of Apollinaire, Honoré Joseph Géry Pieret, who had recently returned one of the stolen statues to the French newspaper the Paris-Journal.[11] Apollinaire implicated his friend Picasso, who had bought Iberian statues from Pieret, and who was also brought in for questioning in the theft of the Mona Lisa, but he was also exonerated.[12][11] The theft of the Mona Lisa was perpetrated by Vincenzo Peruggia, an Italian house painter who acted alone and was only caught two years later when he tried to sell the painting in Florence.

Apollinaire wrote the preface for the first Cubist exposition outside of Paris; VIII Salon des Indépendants, Brussels, 1911.[13] In an open-handed preface to the catalogue of the Brussels Indépendants show, Apollinaire stated that these 'new painters' accepted the name of Cubists which has been given to them. He described Cubism as a new manifestation and high art [manifestation nouvelle et très élevée de l'art], not a system that constrains talent [non-point un système contraignant les talents], and the differences which characterize not only the talents but even the styles of these artists are an obvious proof of this.[14][15] The artists involved with this new movement, according to Apollinaire, included Pablo Picasso, Georges Braque, Jean Metzinger, Albert Gleizes, Robert Delaunay, Fernand Léger, and Henri Le Fauconnier.[16] By 1912 others had joined the Cubists: Jacques Villon, Marcel Duchamp, Raymond Duchamp-Villon, Francis Picabia, Juan Gris, and Roger de La Fresnaye, among them.[14][17][18][19]

The term Orphism was coined by Apollinaire at the Salon de la Section d'Or in 1912, referring to the works of Robert Delaunay and František Kupka. During his lecture at the Section d'Or exhibit Apollinaire presented three of Kupka's abstract works as perfect examples of pure painting, as anti-figurative as music.[18]

In Les Peintres Cubistes, Méditations Esthétiques (1913) Apollinaire described Orphism as "the art of painting new totalities with elements that the artist does not take from visual reality, but creates entirely by himself. [...] An Orphic painter's works should convey an untroubled aesthetic pleasure, but at the same time a meaningful structure and sublime significance. According to Apollinaire Orphism represented a move towards a completely new art-form, much as music was to literature.[20]

The term Surrealism was first used by Apollinaire concerning the ballet Parade in 1917. The poet Arthur Rimbaud wanted to be a visionary, to perceive the hidden side of things within the realm of another reality. In continuity with Rimbaud, Apollinaire went in search of a hidden and mysterious reality. The term "surrealism" appeared for the first time in March 1917 (Chronologie de Dada et du surréalisme, 1917) in a letter by Apollinaire to Paul Dermée: "All things considered, I think in fact it is better to adopt surrealism than supernaturalism, which I first used" [Tout bien examiné, je crois en effet qu'il vaut mieux adopter surréalisme que surnaturalisme que j'avais d'abord employé].[21]

He described Parade as "a kind of surrealism" (une sorte de surréalisme) when he wrote the program note the following week, thus coining the word three years before Surrealism emerged as an art movement in Paris.[22]

Apollinaire served as an infantry officer in World War I and, in 1916, received a serious shrapnel wound to the temple, from which he would never fully recover.[5] He wrote Les Mamelles de Tirésias while recovering from this wound. During this period he coined the word "Surrealism" in the programme notes for Jean Cocteau's and Erik Satie's ballet Parade, first performed on 18 May 1917. He also published an artistic manifesto, L'Esprit nouveau et les poètes. Apollinaire's status as a literary critic is most famous and influential in his recognition of the Marquis de Sade, whose works were for a long time obscure, yet arising in popularity as an influence upon the Dada and Surrealist art movements going on in Montparnasse at the beginning of the twentieth century as, "The freest spirit that ever existed."

The war-weakened Apollinaire died at the age of 38 on 9 November 1918 of influenza during the Spanish flu pandemic of 1918 ravaging Europe at the time, two years after being wounded in World War I.[5] Due to his military service for the duration of the war, he was declared "Dead for France" (Mort pour la France) by the French government.[3] He was interred in the Père Lachaise Cemetery, Paris.

In 1900 he wrote his first novel Mirely, ou le petit trou pas cher (pornographic), which was eventually lost.[5] Apollinaire's first collection of poetry was L'enchanteur pourrissant (1909), but Alcools (1913) established his reputation. The poems, influenced in part by the Symbolists, juxtapose the old and the new, combining traditional poetic forms with modern imagery. In 1913, Apollinaire published the essay Les Peintres Cubistes, Méditations Esthétiques on the Cubist painters, a movement which he helped to define. He also coined the term orphism to describe a tendency towards absolute abstraction in the paintings of Robert Delaunay and others.

Shortly after his death, Mercure de France published Calligrammes, a collection of his concrete poetry (poetry in which typography and layout adds to the overall effect), and more orthodox, though still modernist poems informed by Apollinaire's experiences in the First World War and in which he often used the technique of automatic writing.

In his youth Apollinaire lived for a short while in Belgium, mastering the Walloon dialect sufficiently to write poetry, some of which has survived.

Apollinaire is played by Seth Gabel in the 2018 television series Genius, which focuses on the life and work of Pablo Picasso.