From Infogalactic: the planetary knowledge core
Jump to: navigation, search
For other uses, see Guinevere (disambiguation). 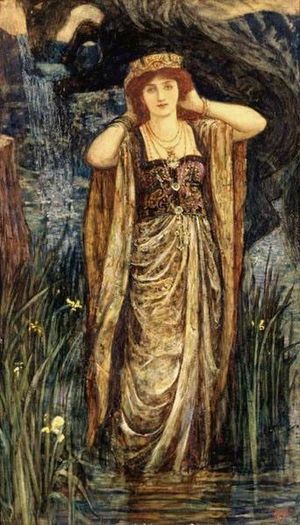 Guinevere /ˈɡwɪnᵻvɪər/, often written as Guenevere or Gwenevere,[1] was the wife of King Arthur in the Arthurian Legend. In medieval romances, one of the most prominent story arcs is Queen Guinevere's love affair with her husband's chief knight Sir Lancelot. This story first appeared in Chrétien de Troyes's Lancelot, the Knight of the Cart and became a motif in Arthurian literature, starting with the Lancelot-Grail Cycle of the early 13th century and carrying through the Post-Vulgate Cycle and Thomas Malory's Le Morte d'Arthur. Guinevere and Lancelot's betrayal of Arthur preceded his eventual defeat at the battle of Camlann by Sir Mordred

The Welsh form Gwenhwyfar, which seems to be cognate with the Irish name Findabair, can be translated as "The White Enchantress" or "The White Fay/Ghost", from Proto-Celtic *Uindo- "white, fair, holy" + *seibara "magical being" (cognate with Old Irish síabair "a spectre, phantom, supernatural being [usually in pejorative sense]").[2][3][4][5][6]

Geoffrey of Monmouth rendered her name as Guanhumara in Latin (though there are many spelling variations found in the various manuscripts of his Historia Regum Britanniae). The name is given as Guennuuar in Caradoc's Vita Gildae, while Gerald of Wales refers to her as Wenneuereia. In the 15th century Middle Cornish play Bewnans Ke, she was called Gwynnever. A cognate name in Modern English is Jennifer, from Cornish.[7] 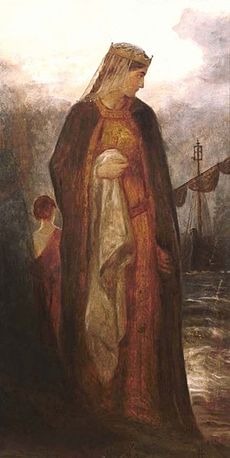 In one of the Welsh Triads (Trioedd Ynys Prydein, no. 56), there are three Gwenhwyfars married to King Arthur; the first is the daughter of Cywryd of Gwent, the second of Gwythyr ap Greidawl, and the third of (G)ogrfan Gawr ("the Giant"),[8]). In a variant of another Welsh Triad (Trioedd Ynys Prydein, no. 54), only the daughter of Gogfran Gawr is mentioned. Two other Triads (Trioedd Ynys Prydein, no. 53, 84) mention Gwenhwyfar's contention with her sister Gwenhwyfach, which was believed to be the cause of the Battle of Camlann. In the Welsh romance Culhwch ac Olwen, she is mentioned alongside her sister Gwenhwyfach. In Geoffrey of Monmouth's Historia Regum Britanniae, she is described as one of the great beauties of Britain, descended from a noble Roman family and educated under Cador, Duke of Cornwall. 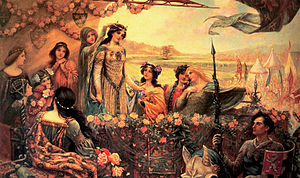 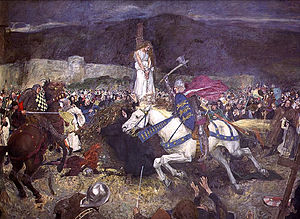 The Rescue of Guinevere by William Hatherell

In non-Welsh medieval romance, Guinevere is the daughter of King Leodegrance, who served Uther Pendragon and was entrusted with the Round Table after Pendragon's death. In these histories, Leodegrance's kingdom lies near the Breton city of Carhaise (the modern Carhaix). In the fields to the south and east of Carhaise, Arthur defends Leodegrance by defeating Rience, which leads to his meeting and marriage with Guinevere. This version of the legend has Guinevere betrothed to Arthur early in his career, while he was garnering support. When Lancelot arrives later, she is instantly smitten, and they have an affair that eventually leads to Arthur's fall. Their affair is exposed by two of King Lot's sons, Agravain and Mordred, and Lancelot flees for his life while Arthur reluctantly sentences his wife to be burned at the stake. Knowing Lancelot and his family would try to stop the execution, Arthur sends many of his knights to defend the pyre, though Gawain refuses to participate. Lancelot arrives and rescues the queen. Gawain's brothers Gaheris and Gareth are killed in the battle, sending Gawain into a rage so great that he pressures Arthur into a direct confrontation with Lancelot. When Arthur goes to France to fight Lancelot, he leaves Guinevere in the care of Mordred, who plans to marry the queen himself and take Arthur's throne. In some versions of the tale, Guinevere assents to Mordred's proposal; in others, she hides in the Tower of London and later takes refuge in a convent. Hearing of the treachery, Arthur returns to Britain and slays Mordred at Camlann, but his wounds are so severe that he is taken to the isle of Avalon. Guinevere meets Lancelot one last time, then returns to the convent where she spends the remainder of her life.[9]

Guinevere is childless in most stories,[10] two exceptions being the Perlesvaus and the Alliterative Morte Arthure.[11] In Alliterative Morte Arthure, Guinevere willingly becomes Mordred's consort and bears him two sons, though this is implied rather than stated in the text. There were mentions of Arthur's sons in the Welsh Triads, though their exact parentage is not clear.

Other family relations are equally obscure. A half-sister and a brother play the antagonists in the Lancelot–Grail and the German romance Diu Crône respectively, but neither character is mentioned elsewhere. Welsh tradition remembers the queen's sister Gwenhyvach and records the enmity between them. While later literature almost always named Leodegrance as Guinevere's father, her mother was usually unmentioned, although she was sometimes said to be dead; this is the case in the Middle English romance The Awntyrs off Arthure (The Adventures of Arthur), in which the ghost of Guinevere's mother appears to her daughter and Gawain in Inglewood Forest. Other works name cousins of note, though these do not usually appear in more than one place. 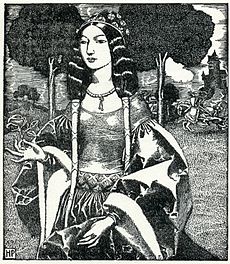 The Lady Guinevere by Howard Pyle; from The Story of King Arthur and His Knights (1903)

Guinevere has been portrayed as everything from a weak and opportunistic traitor to a fatally flawed but noble and virtuous gentlewoman. In Chrétien's Yvain, the Knight of the Lion, she is praised for her intelligence, friendliness, and gentility, while in Marie de France's Lanval (and Thomas Chestre's Middle English version, Sir Launfal), she is a vindictive adulteress, disliked by the protagonist and all well-bred knights. Early chronicles tend to portray her inauspiciously or hardly at all, while later authors use her good and bad qualities to construct a deeper character who played a larger role. The works of Chrétien were some of the first to elaborate on the character Guinevere beyond simply the wife of Arthur. This was likely due to Chrétien's audience at the time, the court of Marie de Champagne, which was composed of courtly ladies who played highly social roles.[12]

There was once a popular folk rhyme known in Wales concerning Gwenhwyfar: 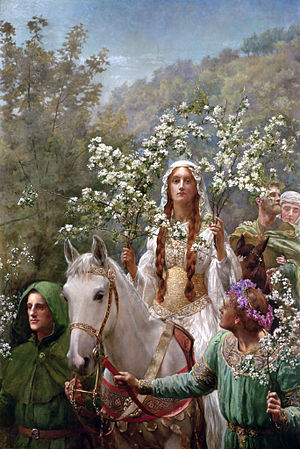 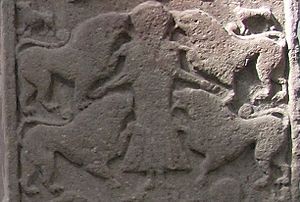 Detail of the biblical story of Daniel in the lions' den from a Pictish monument from Meigle. Local folklore identifies this as Vanora (Guinevere) being fed to wild beasts as punishment for her infidelity.

The earliest mention of Guinevere is in the Welsh tale Culhwch ac Olwen, where she appears as Arthur's queen, but little more is said about her. Caradoc of Llancarfan, who wrote his Life of Gildas before 1136, recounts her being kidnapped by Melwas, king of the "Summer Country" (Aestiva Regio, perhaps meaning Somerset), and held prisoner at his stronghold at Glastonbury. The story states that Arthur spent a year searching for her and assembling an army to storm Melwas' fort when Saint Gildas negotiates a peaceful resolution and reunites husband and wife.[14] This is the earliest written account of Guinevere's abduction, one of the earliest and most common episodes in Arthurian legend. A seemingly related account was carved into the archivolt of Modena Cathedral in Modena, Italy, which most likely predates Caradoc's telling. Here, "Artus de Bretania" and Isdernus approach a tower in which "Mardoc" is holding "Winlogee", while on the other side Carrado (most likely Caradoc) fights Galvagin (Gawain) while the knights Galvariun and Che (Kay) approach. "Isdernus" is most certainly an incarnation of Yder, a Celtic hero whose name appears in Culhwch and Olwen, and who is Guinevere's lover in a nearly-forgotten tradition mentioned in Beroul's Tristan and reflected in the later Roman de Yder. The Welsh poet Dafydd ap Gwilym alludes to Guinevere's abduction in two of his poems, and the medievalist Roger Sherman Loomis suggests that this tale shows that "she had inherited the role of a Celtic Persephone".[15]

Geoffrey of Monmouth tells a different version of Guinevere's abduction, adding that she was descended from a noble Roman family and was the ward of Cador, Duke of Cornwall.[16] Arthur leaves her in the care of his nephew Mordred while he crosses over to Europe to go to war with the (fictitious) Roman Procurator Lucius Hiberius. While he is absent, Guinevere is seduced by Mordred and marries him, and Mordred declares himself king and takes Arthur's throne; consequently, Arthur returns to Britain and fights Mordred at the fatal Battle of Camlann.[17]

Chrétien de Troyes tells yet another version of Guinevere's abduction, this time by Meleagant (whose name is possibly derived from Melwas) in Lancelot, the Knight of the Cart. The abduction sequence is largely a reworking of that recorded in Caradoc's work, but here the queen's rescuer is not Arthur (or Yder) but Lancelot, whose adultery with the queen is dealt with for the first time in this poem. It has been suggested that Chrétien invented their affair to supply Guinevere with a courtly extramarital lover. Mordred could not be used as his reputation was beyond saving, and Yder had been forgotten entirely.[18]

In the German tale Diu Crône, Guinevere's brother Gotegrim kidnaps her and intends to kill her for refusing to marry Gasozein, who claims to be her rightful husband. In Ulrich von Zatzikhoven's Lanzelet, Valerin, King of the Tangled Wood, claims the right to marry her and carries her off to his castle in a struggle for power that reminds scholars of her prescient connections to the fertility and sovereignty of Britain. Arthur's company saves her, but Valerin kidnaps her again and places her in a magical sleep inside another castle surrounded by snakes, where only the powerful sorcerer Malduc can rescue her. All of these similar tales of abduction by another suitor – and this allegory includes Lancelot, who whisks her away when she is condemned to burn at the stake for their adultery – are demonstrative of a recurring Hades-snatches-Persephone theme, positing that Guinevere is similar to the otherworld bride Étaín, who Midir, king of the Underworld, carries off from her earthly life after she has forgotten her past.[19]

A version of the abduction of Guinevere is associated with Meigle in Scotland, known for its carved Pictish stelae. One of the stones, now in the Meigle Sculptured Stone Museum, is said to depict Vanora, the local name for Guinevere.[20] She is said to have been abducted by King Mordred. When she is eventually returned to Arthur, he has her condemned to death for infidelity and orders that she be torn to pieces by wild beasts, an event said to be depicted on Meigle Stone 2.[20] This stone was one of two that originally stood near a mound that is identified as Vanora's grave.[20] 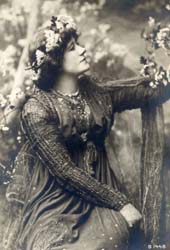 Ellen Terry as Guinevere in the play King Arthur by J. Comyns Carr in the Lyceum Theatre production, designed by Sir Edward Burne-Jones. American postcard (mailed 12 January 1895) based on a rotogravure to promote the US tour. The New York Public Library for the Performing Arts, Billy Rose Theatre Collection

Modern adaptations of Arthurian legend vary greatly in their depiction of Guinevere, largely because certain aspects of her story must be fleshed out by the modern author. In spite of her iconic doomed romance with Lancelot, a number of modern reinterpretations portray her as being manipulated into her affair with Lancelot (usually by Morgan le Fay or Nimue), with Arthur being her rightful true love. Others present her love for Lancelot as stemming from a relationship that existed prior to her arranged marriage to Arthur.