Guiseley Association Football Club is an English football club based in Guiseley, West Yorkshire. The club currently plays in the National League, the fifth tier of English football. Guiseley has played its home matches at Nethermoor Park since its foundation in 1909. In the 2014–15 season, Guiseley achieved promotion to the National League for the first time in their history. 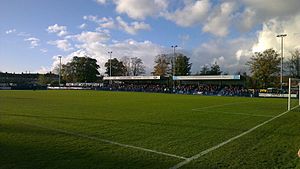 Founded in 1909 by a local group of enthusiasts, the club's first success came in 1913 when they won the local Wharfedale League. Following the end of the First World War the club switched to the Leeds League, achieving little until 1924 when another switch, to the West Riding County Amateur Football League, eventually brought success. A treble of league championships followed in the 1930s as well as two appearances in the last 16 of the old F.A. Amateur Cup, against South Bank in 1932 and Cambridge Town (now City) in 1934.

A fourth league title was won in 1939, after which seventeen years were to elapse before the fifth, achieved in 1956. It was followed by another switch, to the West Yorkshire League, which heralded a remarkable run of success in the local Wharfedale Challenge Cup, the trophy being won on nine out of ten occasions in the 1960s.

They reached the FA Vase Final again in 1992 this time as runners-up to Wimborne Town and won the Northern Premier League First Division in 1994, a season also marked by an FA Trophy semi-final appearance with Runcorn.

They stayed in the Premier Division until relegation in 2000 but returned to the top division in 2004. In the 2007–08 season, they narrowly missed out on a playoff place, finishing 6th, just one point behind Buxton.

The Lions won the 2009–10 Northern Premier League on the last day of the season. A 2–0 victory over Ashton United coupled with Boston United drawing with Marine, meant that Guiseley would be playing in the Conference North during the 2010–11 season. This league championship victory capped their centenary year.

They had a great start to Conference North life and, as of the end of October 2010, they were third in the league. After a good FA Cup run, they eventually lost 5–0 Crawley Town in the first round. They also had a good run in the FA Trophy, reaching the quarter finals before losing 1–0 at home to Luton Town. However, they did win the West Riding County Cup, beating Thackley at Valley Parade 4–2 after extra time.[1]

As well as cup success, Guiseley defied expectations by finishing 5th in the league – the highest league placing in their history – and also earning themselves a place in the play-offs. In the play-off semi-finals they knocked out Boston United – winning the first leg 1–0 thanks to a Warren Peyton blockbuster. Guiseley lost the second leg 3–2 (after extra time) but the game was drawn on aggregate and Guiseley won the penalty shoot-out.[2]

The play-off final against A.F.C. Telford United was held at the New Bucks Head on 15 May. Guiseley lost the match 3–2 having led 2–1 with 12 minutes remaining.

Guiseley once again competed in the Conference North for the 2011–12 season. The club sold their top scorer for the 2010–11 season, James Walshaw to Conference Premier side Darlington[citation needed]

After boosting their squad in the summer of 2011, Guiseley announced they had re-signed James Walshaw in early 2012 from Darlington to bolster their push for promotion. At the beginning of March 2012 Guiseley were 4th in the league, 12 points behind league leaders Hyde, but with three games in hand. Guiseley also progressed through to the West Riding Cup final for the second consecutive year. They were knocked out the FA Cup by Ashington in the second qualifying round, a side three divisions below Guiseley. Entering 2012, Guiseley were once again performing well in the league- they also signed Chris Senior from Alfreton on loan and sold Michael Brough to local rivals Harrogate Town in December. Guiseley finished the season in 2nd place, narrowly losing the title to Hyde by five points. Guiseley went on to face Nuneaton in the play-off semi-final. They drew the first leg 1–1 away, and the tie score remained 1–1 after 90 minutes into the return leg at Nethermoor and the match entered extra time. However, an Andy Brown goal in the 118th minute for Nuneaton clinched the match. Nuneaton went on to secure promotion by beating Gainsborough Trinity 1–0 in the play-off final.

Guiseley started the new season with a 4–1 win over Histon, a 7–1 romping of Droylsden, and 2–0 wins over Gainsborough Trinity and Workington meaning they were top after four games. Consistent performances by Chester throughout the season resulted in them comfortably taking the league title and clinching promotion. Guiseley went on to finish in second place in the league for the second consecutive season, reaching the play-offs for the third season in a row. The Lions went on to lose their play-off sem-final tie against F.C. Halifax Town 3–1 on aggregate. Guiseley also enjoyed a good FA Cup run in the 2012–13 campaign, reaching the First Round Proper for the second time in three seasons and the seventh time in the club's history, beating Bamber Bridge, Colwyn Bay and Buxton in the qualifying rounds. They were knocked out at this stage by Conference Premier side, Barrow, losing the replay 1–0 having drawn 2–2 in the first leg at Nethermoor Park.

At the start of the 2013–14 Conference North season, manager Steve Kittrick was sacked six matches into the new campaign, with Guiseley having accumulated 8 points. The ex Bradford City captain Mark Bower was subsequently appointed as his successor. Bower appointed Danny Boshell as assistant manager and together got Guiseley 5th and in the Play-offs, playing North Ferriby United and then Altrincham in the final. Guiseley conceded a last minute winner and Altrincham were promoted.

After finishing 5th in the Conference North, Guiseley played A.F.C. Fylde in the semi final, beating them 3–1 over a two legged affair thanks to goals from Jake Lawlor, assistant manager Danny Boshell and ex-Huddersfield Town captain Andy Holdsworth. Guiseley were promoted to the Conference after beating Chorley 3–2 in the play-off final on 9 May 2015. Chorley took a 2–0 lead into the second half but Guiseley replied putting pressure on the Chorley defence. Adam Boyes scored after receiving a through ball from Danny Boshell, he took it down and slotted the ball past the Chorley keeper in front of the travelling fans. Liam Dickinson scored a header from 15 yards out following a free kick from keeper Steven Drench to level the score. Five minutes later substitute Nicky Boshell slotted home an Adam Boyes cross to score the winner, catapulting Guiseley into the top of non-league's National League (division) for the first time in their history.

The club plays at Nethermoor Park, which has a capacity of 3,000, with a seated stand totalling 500 and two terraced stands however the club are looking towards extending the ground, due to National League standards, which the ground needs to hold at least 4,000 spectators.[3] In August 2008 the ground was attacked by arsonists. One third of the main stand was damaged in the early morning blaze. More than 40 seats and wooden flooring were destroyed.[4]

Updated as of 31 July 2015 Note: Flags indicate national team as defined under FIFA eligibility rules. Players may hold more than one non-FIFA nationality.