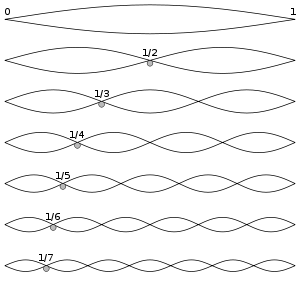 Basic and harmonic oscillations of a string

A guitar harmonic is a musical note played by preventing or amplifying vibration of certain overtones of a guitar string.

Music using harmonics can contain very high pitch notes difficult or impossible to reach by fretting. Guitar harmonics also produce a different sound quality than fretted notes, and are one of many techniques used to create musical variety.

Harmonics are primarily generated manually, using a variety of techniques such as the pinch harmonic. Another method utilizes sound wave feedback from a guitar amplifier at high volume, which allows for indefinite vibration of certain string harmonics. Magnetic string drivers, such as the EBow, also use string harmonics to create sounds that are generally not playable via traditional picking or fretting techniques.

Harmonics are most often played by lightly placing a finger on a string at a nodal point of one of the overtones at the moment when the string is driven. The finger immediately damps all overtones that do not have a node near the location touched. The lowest-pitch overtone dominates the resulting sound.

File:Guitar Tuning by Overtone.ogg
Tuning a guitar using overtones (listen)
File:Harmonic motion4.PNG
The fundamental and the double- and triple-frequency overtones of a guitar string.

The nodes of natural harmonics are located at the following points along a guitar's neck. For fretted strings, these locations shift up the fingerboard by the same number of frets, and resulting harmonics are called artificial harmonics.

Harmonic mode shapes and their corresponding node locations on a guitar

The above fret numbers can be calculated:

Certain nodes of higher harmonics are coincident with nodes of lower harmonics, and the lower sounds overpower the higher ones. For example, mode number 4 can be fingered at nodes 1 and 3; it will occur at node 2 but will not be heard over the stronger first harmonic. Ineffective nodes to finger are not listed above.

File:Table of Harmonics.svg
Table of harmonics, indicating in colors on which positions the same overtones occur

A pinch harmonic is produced by lightly touching the thumb, fingers or palm of the picking hand against the string immediately after it is picked. This action is sufficient to silence the fundamental and all overtones except those that have a node at that location. This is sometimes accomplished by holding the plectrum so very little of its tip protrudes between the thumb and forefinger (roughly 3–5 mm), allowing the thumb to brush the string immediately after it is picked.

The technique must be performed at one of the appropriate harmonic nodes for the note to sound. For example, to produce a pinch harmonic one octave higher than the fundamental of a string that is stopped at the third fret of a guitar, the string must be plucked halfway between the third fret and the bridge (the 15th fret, as the neck is logarithmic). Other overtones of the same fundamental note may be produced in the same way at other nodes along the string. The point where the string is plucked therefore varies depending on the desired note. Most harmonics have several accessible nodes evenly spaced on the string, so the nodes used in practice are normally around where the string is normally picked (around the pickups on an electric guitar), rather than those above the neck as these are the easiest to access with the picking hand from normal playing.

Overtones with a frequency of a multiple of the intended overtone (i.e., the same note in a higher octave) will share the nodes of the lower overtones, so won't be muted. They will, however, be at a much lower volume and since they are the same note in a higher octave, don't detract from the sound of the note. If the string is pinched at the antinode of the intended overtone, no higher overtones will sound.

A single harmonic overtone is quieter than a normal note, which contains many overtones. For this reason, guitar players often increase the guitar volume to play harmonics. Thicker strings, stronger pickups and adjustment to amplifier settings (increasing gain) are some ways of doing this. When the string vibrates primarily at a single fundamental, it has different volumes through different pickups, depending on the proximity of nodes or anti-nodes to the pickup. The different overtone volumes are why neck and bridge pickups sound different. If a node is directly over a pickup, little or no sound is heard.

This technique was popularized by Eddie van Halen. Tapped harmonics are an extension of the tapping technique. The note is fretted as usual, but instead of striking the string the excitation energy required to sound the note is achieved by tapping at a harmonic nodal point. The tapping finger bounces lightly on and off the fret. The open string technique can be extended to artificial harmonics. For instance, for an octave harmonic (12 fret nodal point) press at the third fret, and tap the fifteenth fret, as 12 + 3 = 15.

This technique is used by effect devices producing a magnetic field that can agitate fundamentals and harmonics of steel strings. There are harmonic mode switches as provided by newer versions of the Ebow and by guitar build in sustainers like the Fernandes Sustainer and the Moog Guitar. Harmonics control by harmonic mode switching and by the playing technique is applied by the Guitar Resonator where harmonics can be alternated by changing the string driver position at the fretboard while playing.