Guitar picking is a group of hand and finger techniques a guitarist uses to set guitar strings in motion to produce audible notes. These techniques involve plucking, strumming, brushing, etc. Picking can be done with:

Using a single thumb pick with the bare fingers is similar to hybrid picking. Another mixed technique is to play different passages with a plectrum or fingerstyle, "palming" the plectrum when not in use.

The pros of each guitar picking style are indirectly correlated to the cons of the other. 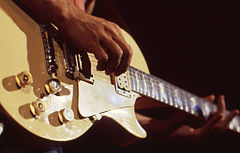 Fingerstyle players use up to four (rarely five) surfaces to strike string independently. However, that does not equate to four plectrums, since plectrums can more easily strike strings on both up and downstrokes—which is much more difficult for fingers.[1] 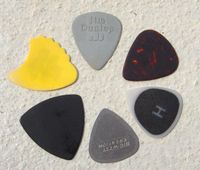 To achieve Tremolo effects, varied arpeggios, and rapid, fluent scale passages, the player must practice alternation, that is, plucking strings with a different finger each time. Using p to indicate the thumb, i the index finger, m the middle finger and a the ring finger, common alternation patterns include:

In some genres, such as folk or country, the player can "lock in" to a picking pattern for the whole song, or even the whole performance, since these forms of music are based on maintaining a steady rhythm.[2] However, in other genres—such as classical, flamenco or fingerstyle jazz—it becomes necessary to switch fluently between patterns.

Tone production is important in any style. Classical guitar, for example, stresses many techniques are that applicable to other styles. Tonal techniques include:

Some many possible fingerstyle strums include

Guitarists resolve the problem of playing notes on non adjacent string by practicing string skipping. To achieve speed, plectrum pickers methods of mixing up and down strokes. 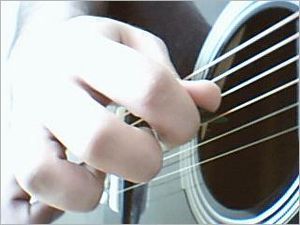 Flatpicking is a technique for playing a guitar using a guitar pick (plectrum) held between two or three fingers to strike the strings. The term flatpicking occurs with other instruments, but is probably best known in the context of playing an acoustic guitar with steel strings—particularly in bluegrass music and old-time country music. Probably starting around 1930, flatpicking developed when guitarists began arranging old-time American fiddle tunes on the guitar, expanding the instrument's traditional role of rhythm guitar accompaniment with an occasional single-note melodic run.

The melodic style in bluegrass is often fast and dynamic, with slides, hammer-ons, pull-offs, powerful strumming and rapid crosspicking. Bluegrass flatpickers usually prefer guitars with a flat top rather than an arch top, and steel strings rather than nylon. The archetypal flatpicking guitar is the 'Dreadnought' series made by C.F. Martin & Company.

Alternate picking is a guitar playing technique that employs strictly alternating downward and upward picking strokes in a continuous run, and is the most common method of plectrum playing. If this technique is performed on a single note at a high speed, then it may also be referred to as tremolo picking.

Sweep picking involves a continuous 'sweep' with the pick across two or more strings (using down-strokes when moving down, and up-strokes when moving up), and is commonly associated with playing arpeggios. To produce a series of distinct notes requires that each note be fretted individually with the fretting hand, rather than held together as a chord. 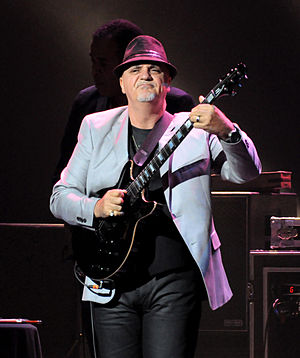 The picking technique of gypsy jazz has been described as similar to economy picking when changing from lower to higher strings, but performed with rest strokes. When changing from higher to lower strings, a down stroke is used instead of a sweep or economy stroke. For instance, on switching from the G to the B string, the plectrum moves in the same direction and comes to rest on the E string—though while switching from the B to G strings both strokes would be downward reststrokes. All down strokes are rest strokes, while all up strokes are free strokes. In general while playing consecutive notes on the same string if the tempo is slow enough all down strokes may be employed. If the tempo is faster alternate picking is generally used, though often consecutive downstrokes are used to emphasize certain notes, particularly in the end of phrases, or to prepared the pick for an easier string change. This technique has become associated with Django Reinhardt in the 1930s, but was also employed by plectrum banjo players, mandolinists and many pre-electric jazz guitarists seeking a strong, projecting acoustic sound on their instruments.

La Pompe is the rhythmic pattern used in gypsy jazz. This form of percussive rhythm is similar to the "boom-chick" in stride piano. The first beat is a staccato chord, emphasizing the lower strings with a more "bassy" sound, produced by a down stroke; the fretting hand immediately afterward releases the strings slightly to deaden them. The next beat is a percussive strum, produced by a down stroke, that emphasizes a more "trebly" sound by engaging a fuller range of the strings. Various artists prefer different levels of staccato on beats 1 and 3, and beats 2 and 4, but in general both beats are short, but still voiced to some degree. The pattern then repeats, but before every first and third beat, an upstroke is performed very quickly (typically with the strings still deadened), giving the music its heavy swing feel.

Anchoring is a practice in both fingerstyle and plectrum where part of the picking hand, usually the little finger or "pinky" touches the guitar body. Although anchoring is common, many guitar teachers advise against it. The contrary approach is known as "floating".

Hybrid picking is mixture of plectrum picking and finger picking. Normally the player holds the pick with thumb and index finger, picking the string, and utilizing the middle and ring finger to finger pick adjacent strings.

Hammer-on is a stringed instrument playing technique performed (especially on fretted string instruments such as guitar) by sharply bringing a fretting-hand finger down on the fingerboard behind a fret, causing a note to sound. This technique is the opposite of the pull-off. Traditionally, this technique is supplemental to conventional picking, being used to achieve legato and ornamentation effects. This is connected to the fact that hammering imparts less energy to a string, so that hammered notes are less audible. With electric instruments, it becomes possible to use these techniques much more extensively. 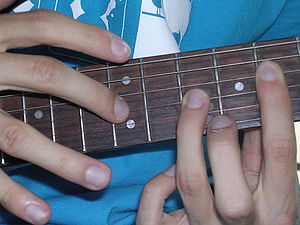 Tapping is a guitar playing technique, where a string is fretted and set into vibration as part of a single motion of being pushed onto the fretboard, as opposed to the standard technique being fretted with one hand and picked with the other. It is similar to the technique of hammer-ons and pull-offs, but used in an extended way compared to them: hammer-ons would be performed by only the fretting hand, and in conjunction with conventionally picked notes; whereas tapping passages involve both hands and consist of only tapped, hammered and pulled notes. Tapping is used exclusively by some players (such as Stanley Jordan) and on some instruments, such as the Chapman Stick.