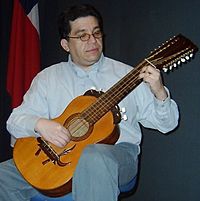 The guitarrón chileno (literally: "large Chilean guitar") is a guitar-shaped plucked string instrument from Chile, with 25 or 24 (rarely) strings.

The origin of the guitarrón chileno may date back to the 16th century. Although the name suggests an instrument derived from the guitar, the design, tuning, and playing technique of the instrument are more closely linked to a common ancestor of the guitar, the vihuela of the Renaissance and Baroque. There are also some design similarities to the Baroque archlutes, though a direct connection is uncertain. Technologically the instrument has followed an evolution similar to that of the guitar. The old instruments used tied-on gut frets and friction tuning pegs (similar to the violin), but modern instruments employ metal frets and geared tuning machines, like those of modern guitars.

Originally the guitarrón chileno was a folk instrument seen primarily in rural areas; however, recent interest in "world music", and in the revival of traditional folk music forms has led to increased interest in the instrument in more urban areas and contemporary musical settings. The guitarrón chileno is mainly used to accompany el Canto del Poeta (the Poet Singing), an old Chilean folk genre that combines décima (a ten-line poetic form) and payada (improvisation). The music embraces two main groups of themes: Canto a lo Divino (solemn, religious, more prepared themes) and Canto a lo Humano (humorous, amorous, social criticism themes). This instrument is also used to perform in other musical forms like cuecas, tonadas, valses and polkas.[1]

As with most relatives of the guitar, the guitarrón chileno is constructed of wood and the same major sections may be distinguished in its construction:

One of the most distinctive features of the guitarrón chileno is the devils: four short, high-pitched strings, arranged two on each side of the neck, which run from tuners on the upper bouts to auxillaty pins on the sides of the bridge near the daggers.

Either the fifth course or the third course may sometimes have only four strings, depending on the individual instrument design.

The traditional playing method for the guitarrón chileno is to pluck the strings with the finger tips and nails of the right hand. Typically only the thumb and index finger are employed, especially in the payada styles. The left hand frets strings on the fingerboard in a manner similar to that of the guitar and other guitar-like instruments.