Gulf Coast of the United States 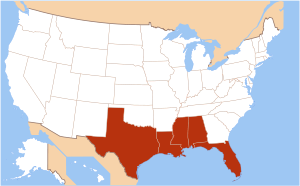 States that border the Gulf of Mexico are shown in red. 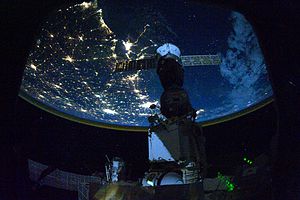 The economy of the Gulf Coast area is dominated by industries related to energy, petrochemicals, fishing, aerospace, agriculture, and tourism. The large cities of the region are (from west to east) Brownsville, Corpus Christi, Houston, Galveston, Beaumont, Lafayette, Baton Rouge, New Orleans, Biloxi, Mobile, Pensacola, St. Petersburg, Tampa, and increasingly, Sarasota; all are the centers of their respective metropolitan areas and contain large ports. (Baton Rouge is relatively far from the Gulf of Mexico; its port is on the Mississippi River, as is the port of New Orleans.)

The Gulf Coast area is vulnerable to hurricanes as well as floods and severe thunderstorms. Tornadoes are infrequent at the coast but do occur, however the frequency at which they occur in inland portions of Gulf Coast states is much greater. Earthquakes are extremely rare to the area, but a surprising 6.0 earthquake in the Gulf of Mexico on September 10, 2006, could be felt from the cities of New Orleans to Tampa. 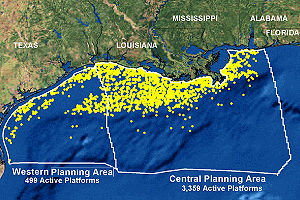 The Gulf Coast is a major center of economic activity. The marshlands along the Louisiana and Texas coasts provide breeding grounds and nurseries for ocean life that drive the fishing and shrimping industries. The Port of South Louisiana (Metropolitan New Orleans in Laplace) and the Port of Houston are two of the ten busiest ports in the world by cargo volume.[1] As of 2004, seven of the top ten busiest ports in the U.S. are on the Gulf Coast.[2]

The discovery of oil and gas deposits along the coast and offshore, combined with easy access to shipping, have made the Gulf Coast the heart of the U.S. petrochemical industry. The coast contains nearly 4,000 oil platforms.

Besides the above, the region features other important industries including aerospace and biomedical research, as well as older industries such as agriculture and — especially since the development of the Gulf Coast beginning in the 1920s and the increase in wealth throughout the United States — tourism. 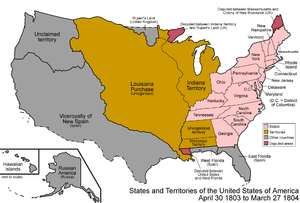 Map of the Louisiana Purchase

The history of the Gulf Coast is an important part of United States history; as economically important as the Gulf Coast is to the United States today, it arguably once held an even greater position of prominence in the U.S. Before Europeans arrived in the region, the region was home to several pre-Columbian kingdoms that had extensive trade networks with empires such as the Aztecs and the Mississippi Mound Builders. Shark and alligator teeth and shells from the Gulf have been found as far North as Ohio, in the mounds of the Hopewell culture.[3]

The first Europeans to settle the Gulf Coast were primarily the French and the Spanish. The Louisiana Purchase and the Texas Revolution made the Gulf Coast a part of the United States during the first half of the 19th century. As the U.S. population continued to expand its frontiers westward, the Gulf Coast was a natural magnet in the South providing access to shipping lanes and both national and international commerce. The development of sugar and cotton production (enabled by slavery) allowed the South to prosper. By the mid 19th century the city of New Orleans, being situated as a key to commerce on the Mississippi River and in the Gulf, had become the largest U.S. city not on the Atlantic seaboard and the fourth largest in the U.S. overall.

Two major events were turning points in the earlier history of the Gulf Coast region. The first was the American Civil War, which caused severe damage to some economic sectors in the South, including the Gulf Coast. The second event was the Galveston Hurricane of 1900. At the end of the 19th century Galveston was, with New Orleans, one of the most developed cities in the region. The city had the third busiest port in the U.S.[4] and its financial district was known as the "Wall Street of the South." [5] The storm mostly destroyed the city, which has never regained its former glory, and set back development in the region. 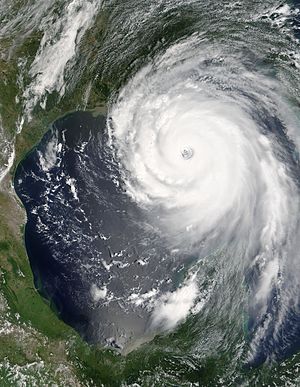 Since these darker times the Gulf Coast has been hit with numerous other hurricanes. In 2005, Hurricane Katrina struck the Gulf Coast as a Category 5 hurricane. It was the most damaging storm in the history of the United States, causing upwards of $80 billion in damages, and leaving over 1,800 dead. Again in 2008 the Gulf Coast was struck by a catastrophic hurricane. Due to its immense size, Hurricane Ike caused devastation from the Louisiana coastline all the way to the Kenedy County, Texas region near Corpus Christi.[6] In addition, Ike caused flooding and significant damage along the Mississippi coastline and the Florida Panhandle[7] Ike killed 112 people and left upwards of 300 people missing, never to be found.[8] Hurricane Ike was the third most damaging storm in the history of the United States, causing more than $25 billion[9] in damage along the coast, leaving hundreds of thousands of people homeless, and sparking the largest search-and-rescue operation in U.S. history.[10]

Other than the hurricanes, the Gulf Coast has redeveloped dramatically over the course of the 20th century. The gulf coast is highly populated. The petrochemical industry, launched with the major discoveries of oil in Texas and spurred on by further discoveries in the Gulf waters, has been a vehicle for development in the central and western Gulf which has spawned development on a variety of fronts in these regions. Texas in particular has benefited tremendously from this industry over the course of the 20th century and economic diversification has made the state a magnet for population and home to more Fortune 500 companies than any other U.S. state. Florida has grown as well, driven to a great extent by its long established tourism industry but also by its position as a gateway to the Caribbean and Latin America. As of 2006, these two states are the second and fourth most populous states in the nation, respectively (see this article). Other areas of the Gulf Coast have benefited less, though economic development fueled by tourism has greatly increased property values along the coast, and is now a severe danger to the valuable but fragile ecosystems of the Gulf Coast.

The following table lists the 15 largest MSAs along the Gulf Coast. 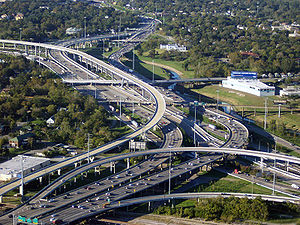 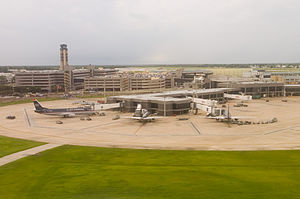 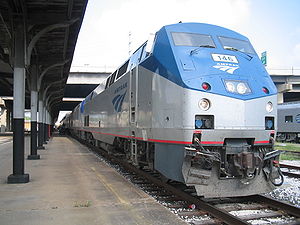