Gulf County, created in 1925, was named for the Gulf of Mexico. Wewahitchka was its first county seat and the 1927 Gulf County Courthouse is still in existence. In 1965 the county seat was moved to Port Saint Joe, which under its original name Saint Joseph, had been the site of Florida's first Constitutional Convention in 1838.

Gulf County is heavily Democratic at the local level. However, the county tends to vote Republican in statewide and national elections. It has only supported a Democrat for president three times since 1960—in 1976, 1980 and 1996.

The county commission consists of three Democrats and two Republicans.

Despite remaining a Democratic stronghold, in the 2008 Presidential election John McCain carried the county with 69% of the vote. 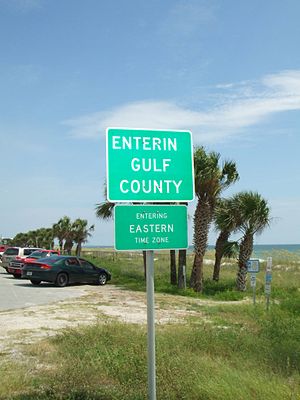 By way of the Intracoastal Waterway, Gulf County is one of a small number of counties in the United States to be under two time zones, Eastern and Central in this case.

Gulf County is part of the Northwest Regional Library System (NWRLS), which serves Bay and Liberty Counties as well.