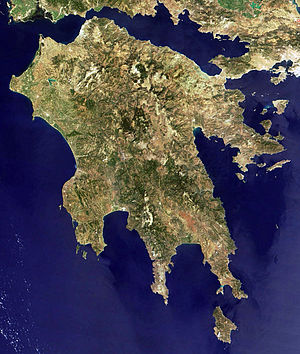 The Peloponnesos, seen from space rotated to conventional map orientation. The seas are dark around the peninsula, reflecting their depth and the top-centre wide inlet is the Gulf of Corinth 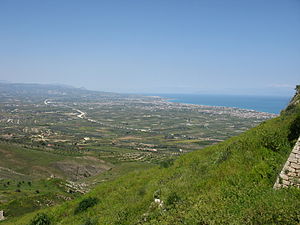 Gulf of Corinth from Acrocorinth 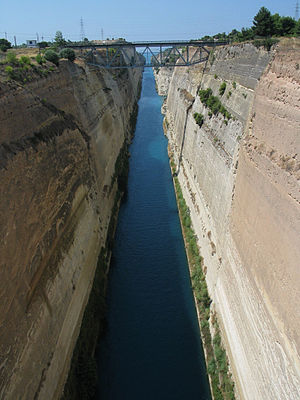 The Gulf of Corinth or the Corinthian Gulf (Greek: Κορινθιακός Kόλπος, Korinthiakόs Kόlpos) is a deep inlet of the Ionian Sea separating the Peloponnese from western mainland Greece. It is bounded in the east by the Isthmus of Corinth which includes the shipping-designed Corinth Canal and in the west by the Strait of Rion which widens into the shorter Gulf of Patras (part of the Ionian Sea) and of which the narrowest point is crossed since 2004 by the Rio-Antirio Bridge. The gulf is bordered by the large administrative divisions (prefectures): Aetolia-Acarnania and Phocis in the north, Boeotia in the northeast, Attica in the east, Corinthia in the southeast and south and Achaea in the southwest. The gulf is in tectonic movement comparable to movement in parts of Iceland and Turkey, growing by 10 mm (0.39 in) per year.

In medieval times, the gulf was known as the Gulf of Lepanto (the Italian form of Naupactus).

Shipping routes between the Greek commercial port Pireus (further away from ultimate destinations but larger and better connected to the south than the north-western Greek port of Igoumenitsa) to western Mediterranean and hemisphere ports pass along this gulf. A further crossing in the form of ferry links Aigio and Agios Nikolaos, towards the western part of the gulf.

The gulf was created by the expansion of a tectonic rift due to the westward movement of the Anatolian Plate, and expands by 10 mm (0.39 in) per year.[1] The surrounding faults can produce earthquakes up to magnitude 6.8, though they are relatively uncommon.

Cetaceans such as fin whales or dolphins are known to come into the Corinthian gulf occasionally.[2]

The cities and towns that lie next to the gulf are: