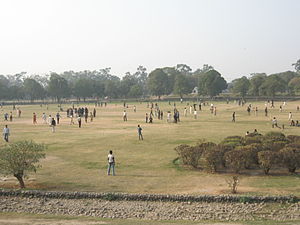 The Gulshan-e-Iqbal Park (Urdu: گلشن-اقبال پارک‎) is a large park and recreational space in Lahore, Pakistan. With an area of over 67 acres (270,000 m2), the park is one of the largest in the city. It is situated in the suburban locality of Allama Iqbal Town. The name Gulshan-e-Iqbal is literally translated as "the garden of Iqbal," referring to Iqbal, the national poet of Pakistan. It has many recreational rides for children such as swings and bumper cars making it a popular venue with families. It also features a vast artificial lake and a mini-zoo.

The park has some issues regarding security. The park is well maintained by the local council, with new playing areas and rides being added recently due to increased public interest.

On 27 March 2016, a bomb blast occurred in the parking area of Gulshan-e-Iqbal Park, just outside the exit gate and a few feet away from children's swings, killing at least 72 and injuring over 300 people.[1] Taliban faction Jamaat-ul-Ahrar has claimed responsibility[2] for the attack.