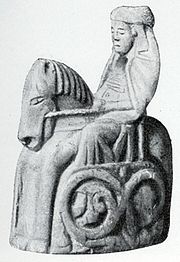 Contemporary Swedish depiction of a queen as a chess piece

Gunnhildr Sveinsdóttir or Gunnhildr Haraldsdóttir, Guda or Gyda (traditionally died in Gudhem, Västergötland, Sweden, c. 1060) was a queen consort of king Anund Jacob of Sweden and of king Sveinn II of Denmark. Her parentage is not confirmed; she is called Gunnhildr Sveinsdóttir or Gunnhildr Haraldsdóttir depending on parentage. She is also sometimes called Guda or Gyda, but this is probably because she is often confused with her daughter, Gyda, who is also known under her mother's name Gunnhildr.

The information about Queen Gunnhildr is often contradictory. Some sources claim that she was the child of the Norwegian Saint Harald, but the other suggested parentage is considered more likely. Here, she is said to be the child of the Norwegian jarl Svein Håkonsson and Holmfrid, daughter (or sister) of king Olof Skötkonung and sister of king Emund the Old of Sweden.

Gunnhildr married King Anund Jacob on an unknown date. Sometimes, the marriage is called childless, and sometimes, they were said to have a daughter by the name of Gyda, sometimes also called Guda or Gunnhildr. It is possible that Gyda was the daughter of Anund by another woman, and that Gunnhildr was her stepmother. Gunnhildr and her daughter/stepdaughter Gyda are often confused with each other. Gyda was married to king Sveinn II of Denmark, who had spent some time at the Swedish court during his political exile from Denmark, in about 1047, but she soon died (in 1048/49).

In 1050, King Anund Jacob died, and Queen Dowager Gunnhildr went to Denmark and married her stepdaughter's widower, her former son-in-law King Sveinn Estridsson of Denmark. The marriage did not last long; the church considered the marriage illegal because they were too closely related - either because they were cousins, or because Sveinn had been married to her daughter - and they were threatened with excommunication if they did not separate. Gunhild was thereby forced to return to Sweden, in 1051/52. Gunnhildr and her daughter's marriage with Sveinn have also been confused with each other.

Gunnhildr returned to her estates in Västergötland where she, according to tradition, spent her remaining days in pious repentance for her sins and religious acts. She is reported to have founded a studio of the making of textiles and habits for clerical use. Her most known work was a choirgown she made for the cathedral of Roskilde. According to legend, she was to have founded the convent of Gudhem Abbey in 1052/54. In reality, however, this convent was founded exactly one hundred years later (in 1152). It is possible that the legend of the convent came about because she and her women lived an isolated religious life and the making of church robes on her estates; one of her estates is believed to have been Gudhem. Adam of Bremen calls her Sanctissima, and describes her hospitability toward the missionary bishop Adalvard, who had been turned away from Skara by King Emund the Old. Tradition says she died in Gudhem, where she had "shown so much virtue" during her set-back, and was buried under a gravestone shaped to her likeness.