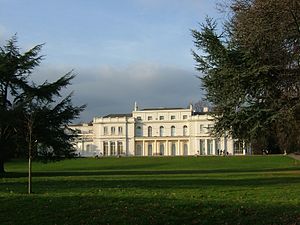 The Large Mansion at Gunnersbury Park.

Gunnersbury Park is a park in Brentford, West London, England. Purchased for the nation from the Rothschild family, it was opened to the public by Neville Chamberlain, then Minister of Health, on 21 May 1926. The park is currently jointly managed by Ealing and Hounslow borough councils.[1]

The name Gunnersbury derives from Gunylda, the niece of King Canute who lived there until her banishment from England in 1044. The manor, owned by the Bishop of London, was occupied by the Frowyk family in the 15th century; Sir Thomas Frowyk, Chief Justice of the Common Pleas was born there in 1460. In the mid-17th century, Gunnersbury was acquired by Sir John Maynard, a lawyer and politician during the time of Cromwell.[2] It was he who built Gunnersbury House, a Palladian mansion modelled on the Villa Badoer, and designed by John Webb, the pupil and son-in-law of Inigo Jones. A map of Ealing dated 1777, shows the house in the north-east corner of the park, facing a horseshoe-shaped lake.

Daniel Defoe visited Gunnersbury in 1742. He wrote: "...(The Mansion) stands on an eminence, the ground falling gradually from it to the Brentford Road; from the Portico…you have an exceeding fine prospect of the County of Surrey, the river Thames…and a good prospect of London in clear weather…"

In 1760, the house and estate were purchased for Princess Amelia, favourite daughter of George II. Plans for her to marry Frederic (who later became Frederic the Great of Prussia) came to nothing, and when her father died, Amelia lost her apartments at St James Palace. She took a house in Hanover Square and bought Gunnersbury House and estate as a country summer retreat. Amelia – George III’s aunt, "that odd and hearty lady" – made Gunnersbury famous with her parties and political intrigues. It was she who landscaped the park in the 18th-century landscape style.

After Amelia died in 1786, the estate had a number of owners until John Morley decided in 1801 to pull down the mansion and sell the land off piecemeal in 13 lots (the old house occupying Lot 2). The lots were eventually acquired by only two people, Alexander Copland (10 lots in 1802 and a further 2 in 1806), and Stephen Cosser (Lot 1 in 1802, sold to Major Alexander Morrison in 1807). Two separate estates were then established, each with its own new house. Copland, who bought 76 acres/30 hectares (most of the original grounds), was a builder and business partner of Henry Holland, and built the "Large Mansion" which was known, with its grounds, as "Gunnersbury Park". The "Small Mansion" was built virtually alongside in around 1806–9, the builders evidently recognising the suitability of the position – an elevated terrace overlooking the horseshoe-lake near where the original mansion had stood. The small mansion and grounds were known as "Gunnersbury House".

In 1835, the merchant and financier Nathan Mayer Rothschild purchased the Large Mansion and park shortly before he died. The Small Mansion and its grounds were acquired in 1889 by the Rothschilds from the Thomas Farmer family (who had owned it since 1828), finally reuniting the original estate. The Rothschilds extended Gunnersbury further, acquiring most of the Old Brentford Common Field to the west, as well as land to the north. An old clay-pit in the south-west, "Cole’s Hole" was landscaped to become the Potomac lake, and the tile-kiln beside it modified to become a boat-house disguised as a gothic folly.

In 1925, following the death of Nathan’s grandson Leopold de Rothschild, Leopold’s wife, Maria, and son Lionel, sold the 200 acre/80 hectare Gunnersbury estate, which was entirely contained within the Brentford Urban District,[3] to the adjacent Ealing Borough Council and Acton Borough Council for £130,000. The transaction was fortunate indeed for the local residents. Following the Great War, there was a demand for housing and building land in the area. The Rothschilds could have got a much greater price had they sold the land for that purpose. Disgruntled Ealing ratepayers wrote to the papers complaining about the burden on their rate bills. The adjacent Brentford and Chiswick Borough Council commented that since Ealing already had The Common and several other parks, not to mention Kew Gardens close by, another park would be unnecessary. They insisted that the greater part of the land should be used for housing, and opposed the loan of the purchase money to Ealing and Acton from the Ministry of Health. However, civic pride and philanthropy prevailed, and Mrs de Rothschild sold Gunnersbury as a permanent memorial for her husband – under the condition that it was only to be used for leisure — although of the 200 acres/80 hectares, 13 were allowed to be used for building houses. The transaction was very much welcomed by The Times, which commented that "...(Gunnersbury)... will be a place of health and happiness for many..." and that "...security against destruction seems to rest only with such places...acquired…with the help of landowners wealthy enough to be able, and public-spirited enough to be ready, to serve the public need".

When he opened the park, Neville Chamberlain "...rejoiced that the people had come into the possession of so magnificent and historical park..." He bemoaned the failure of earlier generations to recognise the need for open spaces in the towns and cities, when outdoor recreation was the privilege of the few. In the previous year, he said that the Ministry of Health had sanctioned loans of over £1.5M for the purchase of open space, but it was still not enough. Brentford and Chiswick relented the following year, joining Ealing and Acton in joint ownership and management of Gunnersbury. The park passed to the London Borough of Hounslow in 1965 and in 1967 the Gunnersbury Park Joint Committee with Ealing was set up.[1]

Part of the park was turned into the Gunnersbury Cemetery.

The actions of the Rothschilds and the Ealing and Acton councils provided the local residents with the park that exists today. There is a substantial open area to the west bordering Lionel Road, which accommodates thirty-six football pitches in the winter.

The large mansion is now Gunnersbury Park Museum — opened in 1929 — a showcase for local history and archaeology, costume and fine art. Some memorabilia of the Rothschilds remain, including a number of their horse-drawn coaches.

There is a boating pond nearby, overlooked by a temple folly dating from 1760 — the only 18th-century building still standing in the park. Opposite this is a large Pitch and Putt next to some tennis-courts. There is an Orangery built in 1836 by Sydney Smirke, who designed the British Museum Reading Room, and the remains of a Gothic fantasy disguising the old stables. Close to the Orangery is what is left of the western half of the Horseshoe Lake – devoid of water now but planned for renewal.

On the east side of the park, adjacent to the boundary with the North Circular Road is where the Japanese water-garden used to be. It was laid out in 1901 as a site for Leopold de Rothschild’s water lilies. This too is due for restoration. In the south western corner of the park is the Potomac fishing-lake complete with its boat-house folly.

Princess Amelia’s most famous contribution to Gunnersbury was the bathhouse, a "battlemented Gothic building" still visible in the park near the eastern end of the small mansion. Current research shows that the visible building is 19th-century, although the 18th-century foundations of the original bathhouse have been identified under the floor.

Gunnersbury Park was a haven for small boys wanting to fly kites and model aeroplanes and float model boats in the pond, and avoid being evicted by vigilant park-keepers for riding their bikes.[citation needed] The large mansion is quite recognisable as the venue for the Police Exhibition in the climax of the Ealing Studios Comedy The Lavender Hill Mob, when the model Eiffel Towers were exposed as being made from stolen gold bullion. Recognising the cultural diversity of Hounslow and Ealing boroughs, since 2003 the London Mela has been held in Gunnersbury Park – a major celebration of culture from south Asia with live music, dance and fashion as well as market stalls and a selection of food and drink.

In 1991 the London-based indie band The Hit Parade released their single 'In Gunnersbury Park'; the song describes the failing relationship between songwriter J.Henry and his girlfriend Joanna Wood who lived a short distance from the Park in Bollo Lane. [4]

Despite this park and museum being within Greater London, and despite being placed in the top 30% of registered parks in the country and thereby considered to be of national significance; the very high cost of building maintenance over the years has led to much decay. Not only the large mansion but 8 other structures have suffered neglect to the extent that they have been placed on the ‘English Heritage at risk’ register. The landscaping of the park itself has also been included to make a total of ten entries.[5]