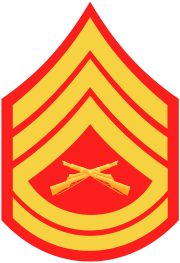 Gunnery sergeant (GySgt) is the seventh enlisted rank in the United States Marine Corps, just above staff sergeant and below master sergeant and first sergeant, and is a staff non-commissioned officer (SNCO). It has a pay grade of E-7.

Gunnery sergeants in infantry and combat support units (i.e., all other Ground Combat Element organizations) typically serve in the billet of "company (or battery) gunnery sergeant" or as the platoon sergeant of a crew-served weapons platoon (i.e., machine guns, mortars, assault weapons/rockets, and anti-tank missiles) or platoon sergeant and/or section leader in tank/armored vehicle platoons (Assault Amphibian or Light Armored Reconnaissance). The company/battery "gunny" serves as the unit's operations chief and works with the Executive Officer to plan and coordinate unit training and operations. In combat, as a member of the unit's command group, he/she serves as a tactical adviser to the commanding officer/battery commander regarding employment of the unit and assists in operating the command post or tactical operations center. In garrison, he/she is responsible to the company/battery commander for supervising and coordinating individual training for the enlisted members of the company or battery and may assist the company/battery first sergeant in the administration and non-tactical leadership of the unit and by supervising the Property NCO, advising the officers, mentoring subordinate ranking Marines, and performing other duties as assigned. The Company/Battery "Gunny" has been described as a "hands on disciplinarian".[1][better source needed] An approximate former equivalent in the US Army would have been "field first sergeant".[2][3][4][5]

The rank of gunnery sergeant in the Marine Corps was established by the Navy personnel act of March 3, 1899 (30 Stat. L., 1009) reflecting the duties of Marines in ship's detachments. The original insignia was three chevrons point up with three straight "ties" with an insignia of a bursting bomb over a crossed rifle and naval gun. From 1904 to 1929 the insignia went to three stripes only over a bursting bomb on top of crossed rifles. In 1929, like the rank of first sergeant, two "rockers" were added beneath the stripes with the same insignia in the middle. In 1937 the middle insignia was dropped. The rank was replaced by technical sergeant in 1946 until restored in 1959, when the crossed rifles insignia were added to Marine chevrons.[6]

The qualifications and selection of gunnery sergeants in the "Old Corps" was explained in congressional testimony in 1912:[7]

The following qualifications are required for appointment to the rank of gunnery sergeant:

A candidate for appointment as gunnery sergeant in the United States Marine Corps should be sufficiently proficient in the drill regulations to thoroughly drill recruits and to drill the squad and company. He should be thoroughly conversant with the nomenclature of the rapid-fire and machine guns used in the naval service and be sufficiently acquainted with their drill to be able to act as gun captains and to instruct the enlisted men in their duties at such guns. He should have knowledge of the kinds and quantities of ammunition used in those guns. He should have a thorough knowledge of the instructions pertaining to target practice. He should have sufficient knowledge of the system of accountability of the United States Marine Corps to take charge of and properly render the accounts of a guard aboard ship, and should be competent in all respects to perform the duties of a first sergeant in charge of a guard on ship to which no marine officer is attached; also a knowledge of the duties involved in the subsistence of men ordered on detached duty, as well as the duties of an officer in command of a part of a landing party on shore.

Gunnery sergeants are men selected from the sergeants of the corps on account of superior intelligence, reliability, and mechanical knowledge. The grade was provided with the idea that they should be somewhat higher in standard than first sergeants; that their knowledge of ordnance and of gunnery should be such that they would be able to make minor repairs to guns—to supervise all work in connection with guns; to command detachments which were of such size as not to warrant a commissioned officer being assigned to them. They are at present in command of marine detachments at naval magazines; are performing duty as first sergeants of regularly organized companies at various posts; in connection with the repair of guns at various Marine Corps stations; in connection with the training of recruits; and, in general, performing duties that require the utmost reliability. For a number of years candidates for promotion to this grade were required to take a special course of instruction before receiving their warrants, but recently, because of the lack of first sergeants and the numerous small detachments organized, it has been necessary to detail many of them for duty as first sergeants. As soon as there are a sufficient number of first sergeants available, it is intended to reestablish the school and to give gunnery sergeants a thorough course of instruction prior to their permanent appointment to this grade, in order that they may be experts in all matters pertaining to the care and preservation of naval ordnance.

At the time of this congressional testimony there were 82 gunnery sergeants in the USMC.

Gunnery sergeants are commonly referred to by the informal abbreviation "gunny". This nickname, which is usually regarded as a title of both esteem and camaraderie, is generally acceptable for use in all but formal and ceremonial situations. Use of the term by lower-ranking personnel, however, remains at the gunnery sergeant's discretion.