Guy's Hospital is a large NHS hospital in the borough of Southwark in central London. It is part of Guy's and St Thomas' NHS Foundation Trust and one of the institutions that comprise the King's Health Partners, an academic health science centre. It is a large teaching hospital and is, with St Thomas' Hospital and King's College Hospital, the location of King's College London School of Medicine (formerly known as the GKT School of Medicine). The Tower Wing (formerly known as Guy's Tower) is the world's tallest hospital building, standing at 148.65 metres (487.7 ft) with 34 floors.[3]

The hospital was founded in 1721 by Thomas Guy, a publisher of unlicensed Bibles who had made a fortune in the South Sea Bubble. It was originally established as a hospital to treat "incurables" discharged from St Thomas' Hospital. Guy had been a Governor and benefactor of St Thomas' and his fellow Governors supported his intention by granting the south-side of St Thomas' Street for a peppercorn rent for 999 years. Guy is interred in the crypt of the Chapel of his foundation.

Guy's has expanded over the centuries. The original buildings formed a courtyard facing St Thomas Street, comprising the hall on the east side and the Chapel, Matron's House and Surgeon's House on the west-side. Two inner quadrangles were divided by a cloister which was later restyled and dedicated to the hospital's members who fell in World War I. The east side comprised the care wards and the 'counting house' with the governors 'Burfoot Court Room'. The north-side quadrangle is dominated by a statue of Lord Nuffield who was the chairman of governors for many years and also a major benefactor. These original parts of the hospital are now administrative and social accommodation.

Despite substantial bomb damage during World War II, the original 18th century chapel remains intact including the tomb of Thomas Guy with a marble sculpture by John Bacon.

A bequest of £200,000 by William Hunt in 1829, one of the largest charitable bequests in England in historic terms, allowed for a further hundred beds to be accommodated. Hunt's name was given to the southern expansion of the hospital buildings. These were replaced c.2000 by new academic buildings for King's College, known as New Hunt's House.

In 1974, the hospital added the 34-storey Guy's Tower and 29-storey Guy's House. At 148.65 metres (487.7 ft) high, Guy's Tower (now called the Tower Wing) regained its tallest hospital building in the world status in 2014 and is currently the 21st tallest building in London. It was designed by Watkins Gray.[4]

Over 13,650 staff work in Guy's Hospital and St Thomas' Hospital. They are two of the oldest teaching hospitals, and they are situated right in the heart of the capital. One of the services that the trust provides is dental care, looking after over 120,000 patients a year. 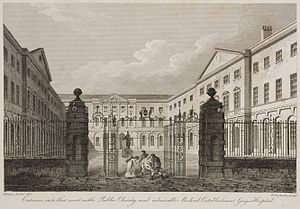 1820 Engraving of entrance by James Elmes and William Woolnoth

The site consists of 19 distinct, but interconnected, buildings with functions including public medical services, teaching, research and student residence. Collectively the buildings are known by local students as 'the squirrel' due to the buildings strange silhouette.

The buildings which compose the campus are:[5]

Since the merger with St Thomas' Hospital, medical services at the Guy's site have been concentrated in the buildings to the east of Great Maze Pond:

The Tower Wing was completed in 1974 and stood more than 142 metres high,[6] The tower was the tallest hospital building in the world and the tallest building in London during the 1970s. It was replaced as the tallest hospital building in the world by the Phase 3 Building of the Hong Kong Sanatorium and Hospital in Happy Valley, Hong Kong in 2008.[7] However, in May 2014 it regained its title as the world's tallest hospital tower, following the completion of extensive repair and improvement works.[8] Guy's Tower is located next to The Shard, the United Kingdom's tallest building. It is a prominent example of Brutalist architecture, which was common at the time it was built. There is a lobby on the ground floor, while most of the other floors are medical departments, there is also a dental school on the 17th and 18th floors, while there is a dental department on floors 20-28. The 29th floor is the location for a baby clinic and the 30th floor is where the lecture room is, which also doubles as a viewpoint.

The historic hospital buildings are now used by administration of the hospital and King's College. From St Thomas Street, the outer quadrangle comprises:

The centre of Old Guy's House leads into a colonnade separating the two inner courtyards. The western courtyard has a statue of the hospital benefactor Lord Nuffield and the eastern courtyard contains an arch from the old London Bridge in which a seated statue of John Keats was recently installed.

The academic buildings of King's College are centred around the lawned area known as "The Park" or "The Quad". The premises stretch as far as Borough High Street and some buildings have names reflecting historic inns formerly on parts of the site:

Lastly, there are a cluster of buildings to the south of New Guy's House, accessible from Snowfields and Weston Street:

Guy's Hospital near London Bridge (5 minutes walk from the overground/underground stations) is home to the largest dental hospital in Europe. Its services include routine dentistry, dental surgery, oral medicine and specialist dentistry. In addition Guy's also provides emergency dental services, and oral and facial surgery with the majority of work being performed by students.

Dental work involves dental surgeons, as well as dental nurses, dental hygienists, dental therapists, dental technicians and medical photographers; all of which are equally important to the efficiency of the hospital's dental care services.

A new, state of the art Cancer Centre is being built at Guy’s Hospital. Most patients will come to the centre to have their cancer diagnosed and treated. The centre will provide specialist cancer services, training, development and research. The aim will be to improve both cancer treatments and outcomes.

The Wolfson Centre for Age-Related Diseases was built following a generous donation from the Wolfson Foundation. This centre brings under one roof a number of research groups dedicated to improving outcomes of conditions including Alzheimer's disease, stroke, Parkinson's disease and spinal cord injury.

In order to minimise the costs of energy and reduce carbon emissions, Guy's Hospital utilises a combined heat and power plant that operates on natural gas.[9]

Notable people who worked at Guy's