Lieutenant General Guy Granville Simonds CC, CB, CBE, DSO, CD (April 23, 1903 – May 15, 1974) was a senior officer of the Canadian Army who commanded the II Canadian Corps during World War II. He served as acting commander of the First Canadian Army, leading the Allied forces to victory in the Battle of the Scheldt in late 1944. In 1951 he was appointed Chief of the General Staff, the most senior member of the Canadian Army.

Simonds came from a military family: his great-grandfather had been in the army of the Honourable East India Company, his grandfather had been a major general in the Indian Army and his father an officer in the Royal Artillery. The Simonds family was related to Ivor Maxse and Lord Milner. On his maternal side, his grandfather William Easton was a wealthy Virginian horse breeder, who had moved to England, renting Ixworth Abbey. Eleanor "Nellie" Easton, his mother, was one of five daughters, four of whom married army officers.[2]

His father Cecil, a major, resigned from the army in fall 1911 (when Guy was 9) and moved his family to British Columbia, working as a surveyor for a railway. Cecil's expectations of having his own survey company were frustrated by the requirement to pass local professional examinations. Re-joining the army at the start of World War I, Cecil was wounded in 1918, and demobilized in 1919 with the rank of colonel. The family spent the war in a rented house in Victoria. Guy's mother sold family possessions to make ends meet. Guy had to quit school for two years at age fourteen to help support the family. Graham speculates that the period of fatherlessness made him a "loner" and self-reliant.[3]

Simonds had three siblings, Cicely, Peter and Eric. Eric (anecdotally an excellent rifle shot, having won prizes at Bisley) became a test pilot, but died in an air accident off Felixstowe in July 1937 in a Miles Magister while serving with the A&AEE[4] in England. Cicely worked as a secretary in the Admiralty during the war. She and her daughter were killed by a V-1 (flying bomb) attack in June 1944.[5]

Guy attended Collegiate School in Victoria and then Ashbury College in Ottawa beginning in 1919.[3] The College's dining hall is named after him.

He studied at the Royal Military College of Canada in Kingston, Ontario between 1921 and 1925,[6] cadet number 1596. Simonds' class was the last to be selected from nationwide exams (Simonds having placed second) and the first after the war to enter a four-year course.[7] At graduation he was awarded the Sword of Honour, judged the best "all rounder", placed second academically, and was generally considered the best horseman in the class.[8]

He was commissioned into the Canadian Army in 1926 as a junior officer in the Royal Canadian Horse Artillery first with B battery in Kingston, then C Battery in Winnipeg. In September 1932 (just weeks after his wedding) with the rank of brevet captain, he attended the Long Gunnery Staff Course in England.[6] He was accompanied to England by his wife, and his first child was born there. He returned to Kingston in 1934. In 1936 and 1937 he attended the Staff College, Camberley.[6] Promoted to major, he returned to the Royal Military College of Canada as Associate Professor of Artillery and later as Instructor in Tactics.

During the pre-war years, Simonds and E. L. M. Burns debated concepts in the pages of Canadian Defence Quarterly.[9] 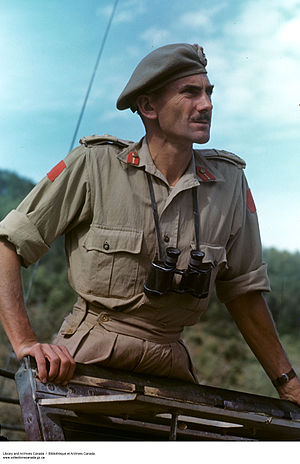 In 1939 he became a GSO II (operations) with 1st Canadian Infantry Division and was posted to the UK in December. In July 1940, he went on to be Commanding Officer of 1st Field Regiment Royal Canadian Artillery, his first command since leaving C battery.[10] In November 1940 he was appointed commandant of the Canadian Junior War Staff Course (an intensive 14 week program that compressed one year of the Camberly course), intended to fill the shortage of trained staff officers.[6][11] He then became GSO I with 2nd Canadian Infantry Division under Victor Odlum.

Shortly thereafter, in August 1941 he was made acting Brigadier General Staff of I Canadian Corps under McNaughton and Pearkes. Later he was confirmed as brigadier and stayed in the BGS role under Harry Crerar until mid-July 1942. Crerar, however, had opposed Simonds' appointment and considered his removal.[12] During his time as BGS, numerous exercises, including Bumper (Sept.1941) and Tiger were conducted, with Simonds catching Montgomery's eye on both occasions.[13]

In July and August 1942 Simonds was involved in planning for an abortive Churchill-inspired attack on Norway, codenamed "Jupiter", thereby avoiding the Dieppe Raid debacle.[12]

In September 1942, he was made Commander of the 1st Infantry Brigade in 1st Canadian Infantry Division.[12]

On April 20, 1943 (three days before his fortieth birthday) Simonds was promoted to major general and appointed General Officer Commanding 2nd Canadian Infantry Division,[16] having risen from major to major general in three-and-a-half years – faster than any other officer in the Canadian army.[17] Just nine days later he was transferred to command 1st division, replacing Major General Harry Salmon who had died in a plane crash while planning operation Husky.[16][18]

In this last post he led the Division through the Invasion of Sicily.[6] At this point, he was the youngest Canadian to lead a division in action.[17] He came under fire for the first time July 16, 1943[19] after nearly 17 years in the army.

On September 3, 1943 Simonds and 1st division landed on the mainland of Italy. Meeting light resistance, they suffered only 9 casualties the first day.[20]

Falling ill September 22, he was replaced as 1st division commander by Chris Vokes.[21] Subsequently he was appointed the GOC of the recently arrived 5th Canadian (Armoured) Division in Italy November 1943. Simonds viewed this, along with the arrival of Crerar and I Canadian Corps, as something of a comedown, although this was not the intent of CMHQ.[17] His initial meeting with Crerar went poorly (possibly strained by Simonds' illness), and relations further deteriorated when Simonds ejected an officer sent by Crerar to measure his headquarters caravan. Crerar took the matter to Montgomery, but found little support. However, Crerar discussed the event with army psychiatrists, First Canadian Army commander Ken Stuart, and post-war pushed for Charles Foulkes to be selected as CGS over Simonds.[22]

Simonds was furious when he learned that to save shipping, his new division would have to take old equipment from 7th Armoured Division. Crerar nixed an idea to use 3350 brand-new I Corps headquarters vehicles to equip the 5th division.[23] The division would not be fully equipped until the end of January 1944. 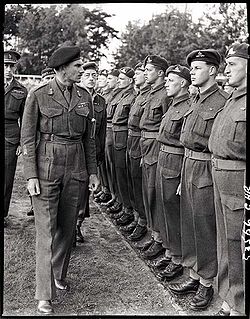 In January 1944 he was made General Officer Commanding II Canadian Corps,[6] which went on to take part in the Normandy landings and advance through France. At age forty-one, Simonds was purported to be the youngest corps commander in the British Empire.[24] Simonds made numerous personnel changes: The Chief Engineer, Chief Medical Officer and the Commander Corps Royal Artillery (CCRA) were sacked, and F. F. Worthington was replaced as commander of 4th Canadian Armoured Division.[24] Talented officers such as George Kitching, Bruce Matthews and Geoff Walsh were brought by Simonds from Italy to II Corps.[25]

For Totalize (beginning August 7), which involved a night attack, numerous navigation aids were devised, along with heavy bomber support. Having learned from Operation Spring, Simonds devised the "Kangaroo", an early armoured personnel carrier converted from non-operational armoured vehicles "defrocked Priests".[6][26] Granatstein characterizes the plan as "brilliant if too complicated",[27] in that it did not account for the inexperience of the troops.

Tractable (August 14) used a smoke screen in an attempt to shield armour from German anti-tank weaponry.

In September 1944, Simonds temporarily took charge of First Canadian Army from General Harry Crerar, who was recovering from a bout of dysentery, and led the liberation of the mouth of the Scheldt River.[6] "By most accounts, Simonds’ assumption of command reinvigorated the army HQ; where Crerar managed, Simonds commanded."[28] When Crerar resumed command with the First Army, Simonds resumed his command of II Canadian Corps for the liberation of North-Western Europe.[6] 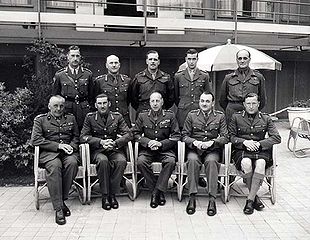 Simonds was "undoubtedly deeply hurt" when he was overlooked and Charles Foulkes was chosen instead as CGS in August 1945.[29]

From 1946–1949 he was Chief Instructor at the Imperial Defence College, "a signal honour for a Canadian".[30] He returned to Canada in 1949 to take a role as Commandant of the Royal Military College of Canada.[6] In 1951 he was appointed Chief of the General Staff.[6]

After retiring from the army, he worked for Halifax Insurance Company, and Toronto Brick and Associates. He was active with Royal Life Saving Society of Canada, the Gurkha Appeal, the Canadian Corps of Commissionaires and was chairman of the National Ballet of Canada.[31]

He criticized the government for seeking closer ties with the US,[30] and opposed the reliance on nuclear weapons, advocating strong conventional forces. Simonds proposed the use of aerial supply to reduce the vulnerability of army divisional supply chains. Dubious of air-power advocates, he foresaw the increasing use of missiles. He believed in the "integration" of defence headquarters, but opposed the Hellyer "unification" of the armed forces.[32][33]

A street is named after him in Antwerp ("Generaal Simondslaan").[34][35] Simonds was honorary colonel of the Royal Regiment of Canada at the time of the regiment's 100th anniversary in October 1962.[36] He was offered an honorary degree from RMC which he declined, as he had opposed the degree program, fearing the long tenure of civilian instructors would unduly influence the curriculum.[37] On October 29, 1971 he was made a Companion of the Order of Canada.[38]

Diagnosed with lung cancer, he died in Toronto on May 15, 1974. He was buried in Toronto's Mount Pleasant Cemetery after a service at Grace Church-on-the-Hill.

On August 17, 1932 he married Katherine "K" Lockhart Taylor, the daughter of a Winnipeg businessman. K was a spirited young woman, having taken flying lessons, a motor mechanics course, and eventually teaching Guy to how to drive. As a subaltern, Simonds had to ask special permission to marry. They had a daughter, Ruth, born in England in June 1933, and a son Charles born in Kingston in 1934.[39]

While overseas in World War II, Simonds had an affair, which K subsequently discovered while in England in 1946.[40] They separated shortly thereafter.

Shortly before retirement, Simonds met Dorothy "Do" Sinclair (the widow of George Graham "Gus" Sinclair) whom he married on January 16, 1960.[41]

Randall Wakelam says "Canadian biographies and memoirs carry two themes: innovative and hard driving commander; cold and uninspiring leader."[28] Terry Copp suggests "overwhelming self-confidence and a degree of arrogance which did not encourage expressions of dissent. Simonds did not attempt to lead; he sought only to command." [28]

In his book "The Normandy Campaign" Victor Brooks lists Simonds as the most effective corps-level commander of the Allied Forces in Normandy. He wrote:

The corps commander among the units that comprised the 21st Army Group who most likely had the largest personal impact on the Normandy campaign was Lieutenant General Guy Simonds. This senior officer of the II Canadian Corps created one of the most effective tank-infantry teams in the Allied forces through a high degree of improvisation during the drive from Caen to Falaise. This general was versatile and imaginative but was not able to generate the momentum that would have more fully closed off the Falaise gap at an earlier date. Despite this drawback, Simonds deserves credit for his effective command.[42]

Max Hastings states: "one of the outstanding Allied corps commanders in Europe, a dour, direct officer who brought unusual imagination to bear on every operational plan for which he was responsible."[43]