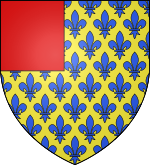 Arms of the Viscounts of Thouars

Guy of Thouars (died 12 April 1213) was the third husband of Constance, Duchess of Brittany, whom he married in 1199 in Angers, County of Anjou between August and October 1199[lower-alpha 1][1] after her son Arthur of Brittany entered Angers to be recognized as count of the three countships of Anjou, Maine and Touraine. He was an Occitan noble, a member of the House of Thouars.

Between 1196 and the time of her death delivering twin daughters, Constance ruled Brittany with her young son Arthur I, Duke of Brittany as co-ruler. When Duke Arthur I died in 1203, he was succeeded by his infant maternal sister, Alix of Thouars. Guy served as Regent of Brittany for his infant daughter Alix, Duchess of Brittany from 1203 to 1206.

In 1204, Guy de Thouars as regent of Dutchess Alix, vassal of the Philip II, King of France, undertook the siege of the Normans island fortress of Mont Saint-Michel. Because the abbey would not surrender, he set fire to the village and massacred the population. He was obliged to beat a retreat under the powerful walls of the abbey. Unfortunately, the fire which he himself lit extended to the buildings, and the roofs fell prey to the flames. Philip II paid Abbot Jordan for the reconstruction cost.

In 1206 Philip II took the regency of Brittany himself, much to the consternation of the Breton nobles. [lower-alpha 2]

Guy of Thouars died in 1213 in Chemillé in the county of Maine, and was buried with Constance at Villeneuve Abbey in Les Sorinières outside of Nantes.

Guy married Constance of Brittany in 1199.[2] They had two daughters:

Contradictory sources state that Constance and Guy might have had another daughter:[4]

In 1203, Guy married as his second wife Eustachie of Chemillé. They had a son: