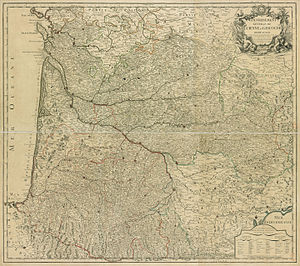 The gouvernement général of Guienne and Gascogne in 1733

Guyenne or Guienne (French: [ɡɥijɛn]; Occitan: Guiana [ˈɡjanɔ]) was an old French province which corresponded roughly to the Aquitania Secunda of the Romans and the archbishopric of Bordeaux. In the 12th century it formed with Gascony the duchy of Aquitaine, which passed under the dominion of the kings of England by the marriage of Eleanor of Aquitaine to Henry II. In the 13th century, through the conquests of Philip Augustus, Louis VIII and Louis IX, it was confined within the narrower limits fixed by the treaty of Paris (1259). It is at this point that Guyenne became distinct from Aquitaine. It then comprised the Bordelais (the old countship of Bordeaux), the Bazadais, part of Périgord, Limousin, Quercy and Rouergue, and the Agenais ceded by Philip III to Edward I in 1279. Still united with Gascony, it formed a duchy extending from the Charente to the Pyrenees. This duchy was held as a fief on the terms of homage to the French kings, and both in 1296 and 1324 it was confiscated by the kings of France on the ground that there had been a failure in the feudal duties. At the treaty of Brétigny (1360), King Edward III acquired the full sovereignty of the duchy of Guyenne, together with Aunis, Saintonge, Angoumois and Poitou. The victories of the Frenchmen Bertrand du Guesclin and Gaston Phœbus restored the duchy soon after to its 13th-century limits. In 1451 it was conquered and finally united to the French crown by Charles VII. In 1469 Louis XI gave it in exchange for Champagne and Brie to his brother Charles, Duke of Berry, after whose death in 1472 it was again united to the royal dominion. Guyenne then formed a government (gouvernement général) which from the 17th century onwards was united with Gascony. The government of Guyenne and Gascony, with its capital at Bordeaux, lasted till the end of the Ancien Régime (1792). Under the Revolution the departments formed from Guyenne proper were those of Gironde, Lot-et-Garonne, Dordogne, Lot, Aveyron and the chief part of Tarn-et-Garonne.[1]