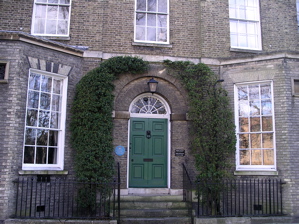 Gwen Mary Darwin was born in Cambridge in 1885, she was the daughter of Sir George Howard Darwin and his wife Lady Maud Darwin, née Maud du Puy. She was the granddaughter of the naturalist Charles Darwin and first cousin of the poet Frances Cornford, née Darwin.

She married the French painter Jacques Raverat in 1911. They were active in the Bloomsbury Group and Rupert Brooke's Neo-Pagan group until they moved to the south of France, where they lived in Vence, near Nice, until his death from multiple sclerosis in 1925. They had two daughters: Elisabeth (1916-2014), who married the Norwegian politician Edvard Hambro, and Sophie Jane (1919-2011), who married the Cambridge scholar M.G.M. Pryor and later Charles Gurney.

She is buried in the Trumpington Extension Cemetery, Cambridge with her father Sir George Darwin; while her mother Lady Maud Darwin was cremated at Cambridge Crematorium on 10 February 1947. Her uncles Sir Francis Darwin and Sir Horace Darwin are buried in the Parish of the Ascension Burial Ground; her first cousin Frances Cornford is buried with her father Sir Francis Darwin.

Cambridge and the people associated with it remained very much the centre of her life. Darwin College, Cambridge, occupies both her childhood home, Newnham Grange, and the neighbouring Old Granary where she lived for the last years of her life. The college has named one of its student accommodation houses after her.

Raverat was one of the very first wood engravers recognised as modern. She went to the Slade School in 1908,[2] but stood outside the groups growing up at the time, the group that gathered around Eric Gill at Ditchling and the group that grew up at the Central School of Arts and Crafts around Noel Rooke. She was influenced by the Impressionists and Post-Impressionists and developed her own painterly style of engraving.[3] There was some similarity between her early engravings and those of Gill, and she did know Gill, but the similarity was based mostly on her black line style at the time, influenced by Lucien Pissarro, and the semi-religious themes that she then chose.

One of her first wood engravings to appear in a book was Lord Thomas and Fair Annet in The Open Window (1911), which also featured a wood engraving by Noel Rooke.

Balston credits her with having produced one of the first two books illustrated with modern wood engravings.[4] This was Spring Morning by her cousin Frances Cornford, published by the Poetry Bookshop in 1915. It was accessioned at the British Library in May 1915, which makes it the first modern book illustrated with wood engravings, as the other contender, The Devil's Devices illustrated by Eric Gill, was accessioned in December 1915.

In 1922 she contributed two wood engravings to Contemporary English Woodcuts, an anthology of wood engravings produced by Thomas Balston, a director at Duckworth and an enthusiast for the new style of wood engravings. Campbell Dodgson, Keeper of Prints and Drawings at the British Museum, wrote about her in his introduction to the book: Mr. Greenwood excels in the delicate and minute work in white line upon black, which has also won the admiration of many collectors for the earlier wood engravings of Mrs. Raverat.[5] Much of Raverat's work was for friends from Cambridge and appeared in books with small editions. She found a wider public with the London Mercury which reproduced many of her engravings. The most famous are perhaps the engravings Six Rivers Round London which were produced for the London General Omnibus Company.[6]

Most of Raverat's commissions for book illustrations date from the 1930s. The first was for a set of engravings for Kenneth Grahame's classic anthology The Cambridge Book of Poetry for Children (1932). This was published by the Cambridge University Press and printed at the press by Walter Lewis. The Cambridge University Press took almost as much care with their printing as a private press, and Lewis printed the wood engravings from the original blocks. He printed four more books for Raverat - Mountains and Molehills by Frances Cornford (1934), Four Tales from Hans Andersen, a new version by R. P. Keigwin (1935), The Runaway by Elizabeth A. Hart (1936) and The Bird Talisman by H. A. Wedgwood (her great-uncle) (1939). Four Tales and The Bird Talisman were illustrated with colour wood engravings. Brooke Crutchley, Lewis's successor at the press, was responsible for printing the collection of Raverat's work by Reynolds Stone and described the care taken over printing from old warped blocks.[7]

Her experience of a real private press, St John Hornby's Ashendene Press, was rather more mixed. Raverat spent a year producing 29 wood engravings for an edition of Les Amours de Daphne et Chloe by Longus. It appeared in 1933, five years after the project started. The first edition had been printed on Japanese vellum, but was scrapped when the ink failed to dry properly.[6]

In 1934 she produced a set of engravings for Farmer’s Glory by A. G. Street (1934), perhaps her best known work. Cottage Angles by Norah C. James (1935) reused engravings produced for Time and Tide. She illustrated Sentimental Journey by Laurence Sterne for Penguin Illustrated Classics in 1938. Her final wood engravings were for another private press, the Dropmore Press, for which she illustrated London Bookbinders 1780-1806 by E. Howe (1950).

Raverat had to give up wood engraving after a stroke in 1951.[6]

Apart from her studies at the Slade and the period from 1915 to 1928, which covered her life with Jacques and early widowhood, Raverat lived in or near Cambridge. In 1928 she moved into the Old Rectory, Harlton, near Cambridge. The house was the model for her engravings for The Runaway. In 1946 she moved into the Old Granary, Silver Street, in Cambridge; the house was at the end of the garden of Newnham Grange, where she was born.[2]

Her life revolved around her contacts in Cambridge. One aspect was her work for the theatre, designing costumes, scenery and programmes. Her first experience was in 1908, when she designed costumes for Milton's Comus at the New Theatre, Cambridge. Her brother-in-law Geoffrey Keynes asked her to provide scenery and costumes for a proposed ballet drawn from William Blake's Illustrations of the Book of Job to commemorate the centennial of Blake's death; her second cousin, Ralph Vaughan Williams, wrote the music to the work which became known as Job, a masque for dancing, the premiere of which took place in Cambridge in 1931. The miniature stage set that she built as a model still exists, housed at the Fitzwilliam Museum in Cambridge. She went on to design costumes, scenery and programmes for some ten productions, mostly for the Cambridge University Musical Society.

Raverat had a keen interest in children's fiction. Three of her books were Victorian stories that she convinced publishers to reprint - The Runaway, The Bird Talisman and Countess Kate.[2] When she discovered that The Runaway had gone out of print, she convinced the publisher Duckworth to reissue it in 1953. Frances Spalding has written an illuminating article about this aspect of Raverat's life in the Guardian.[8]

When she was 62 she started to write her classic childhood memoir Period Piece, which she illustrated with line drawings. It appeared in 1952 and has not been out of print since then.[9] 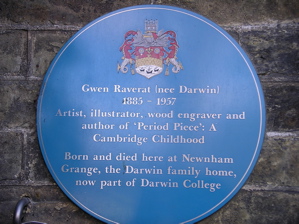 Family members mentioned in Period Piece : A Cambridge Childhood, buried in the Parish of the Ascension Burial Ground in Cambridge include:

Francis Cornford, husband of Frances Cornford; because of the similarity of his Christian name, his father-in-law's and his wife's, he was known to Darwin family as "FMC"; he was cremated at Cambridge Crematorium on 6 January 1943,

Sir Francis Darwin ("Uncle Frank"); father of Frances Cornford, with whom he is buried, and Lady Florence Henrietta Darwin, Sir Francis's third wife is briefly mentioned but the marriage was after the time period in the book; she is buried opposite their grave. The grave of Ellen Wordsworth Darwin (1856 - 1903), ("Aunt Ellen"), née Crofts, the second wife of Sir Francis Darwin and mother of Frances Cornford (née Darwin) is nearby in Girton. 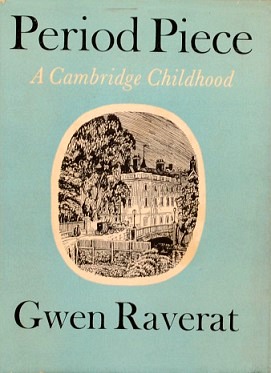 Arthur Woollgar Verrall, buried with his wife Margaret Verrall, a lecturer in classics at Newnham College.

The author and her father, Sir George Darwin (referred to as "Uncle George") are buried together in Trumpington Extension Cemetery in Cambridge; the author's American mother, Lady Maud Darwin (née Du Poy) was cremated at Cambridge Crematorium on 10 February 1947.

"Uncle Richard", Richard Litchfield, husband of "Aunt Etty", is buried where he died in Cannes, France and not at Downe.

She has a memorial at The Assumption of the Blessed Virgin, Harlton, Cambridgeshire where family and friends donated towards the restoration of the church in her memory.

An overview of her life and work

Raverat played a significant part in the wood engraving revival in Britain at the beginning of the twentieth century. By 1914 she had completed some sixty wood engravings, far more than any of her contemporaries.[3] Her name recurs consistently in all contemporary reviews, and the first book devoted to a modern wood engraver was Herbert Furst's Gwendolen Raverat.[10] She illustrated the first book illustrated with modern wood engravings, Spring Morning, and she exhibited at every annual exhibition of the Society of Wood Engravers between 1920 and 1940, exhibiting 122 engravings, more than anyone else.[3]

The range of her relationships can be seen in the holdings of the National Register of Archives.[11]

Raverat's grandson, William Pryor, has edited and published the complete correspondence between Gwen, Jacques, and Virginia Woolf. Pryor has also blogged a talk on Raverat.

A biography Gwen Raverat: Friends, Family & Affections by Frances Spalding was published in 2001.