Gwinnett County is a county in the U.S. state of Georgia. As of the 2010 census, the population was 859,304,[1] making it the second-most populous county in Georgia. Its county seat is Lawrenceville.[2] The county is named for Button Gwinnett, one of the signers of the Declaration of Independence.[3]

Created in 1818 by an act of the Georgia General Assembly, Gwinnett County was formed from parts of Jackson County (formerly part of Franklin County) and from lands gained through the cession of Indian lands. Named for Button Gwinnett, one of the signatories of the Declaration of Independence, the first county court was held at the home of Elisha Winn, and the county seat was placed at Lawrenceville.[4]

In 1861, all three of Gwinnett County’s representatives at the Georgia Constitutional Convention (1861) in Milledgeville voted against secession. Towards the end of the war, several skirmishes took place in Gwinnett County as part of the Atlanta Campaign.

The northeastern part of Gwinnett County was removed to form a part of the new Barrow County in 1914. 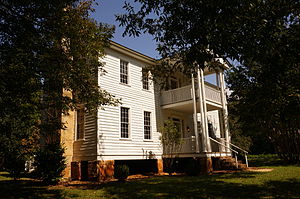 It is located along the Eastern Continental Divide. A portion of the county to the northwest is a part of the Chattahoochee River National Recreation Area chain.

The regional reservoir, Lake Lanier, at the extreme north of the county, is the central cause to the Tri-state water dispute.

Under Georgia's "home rule" provision, county governments have free rein to legislate on all matters within the county, provided that such legislation does not conflict with state or federal law, or state or federal Constitutions.

Gwinnett County, Georgia is governed by a five-member Board of Commissioners, which exercises both legislative and executive authority within the county. The chairman of the Board is elected county-wide and serves full-time. The four other Commissioners are elected from single-member districts and serve part-time positions. The Board hires a County Administrator who oversees daily operations of the county's twelve executive departments. Gwinnett County has a police department that operates under the authority of the Board of Commissioners.

Gwinnett County has the largest public school system in the State of Georgia. Members of the Board of Education are elected from special election districts in the county.

Gwinnett County Board of Commissioners

The main newspaper of Gwinnett County, Georgia is the Gwinnett Daily Post.

The Spanish language newspaper El Nuevo Georgia has its headquarters in unincorporated Gwinnett County, near Norcross.[22][23]

Telemundo Atlanta and The Atlanta Journal-Constitution are both based out of Gwinnett.

The rap group Migos hails from Gwinnett County. Migos won the 2015 YouTube Music Award, as well as several other notable entertainment television awards. Net worth in 2015 was reported to be 4.2 million (USD).

Minor-league affiliates of the NHL Buffalo Sabres, the Phoenix Coyotes, and the MLB Atlanta Braves play home games and talent scout in the area.

Georgia Force of Arena Football League had also played at Arena at Gwinnett Center before the team folded in 2012.

On May 29, 2015, the Minnesota Swarm of the National Lacrosse League announced it was relocating, becoming the Georgia Swarm, and will play at The Arena at Gwinnett Center beginning with the 2016 season.[citation needed]