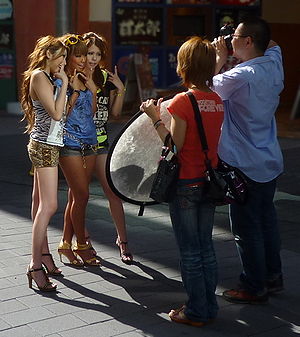 Gyaru being photographed in Ikebukuro, Tokyo, in 2009

Gyaru (ギャル?) is a Japanese transliteration of the English word 'girl'. The name originated from a 1970s brand of jeans called "gurls", with the advertising slogan: "I can't live without men", and was applied to fashion- and peer-conscious girls in their teens and early twenties. Its usage peaked in the 2000s and has gradually declined. The term gradually drifted to apply to an older group, whose seeming lack of interest in work or marriage gained the word a "childish" image. It is now used almost interchangeably with kogal.

Gyaru subculture is still a large influence in Japan's fashion economy with gyaru brands branching out and becoming more accessible in rural areas. In Tokyo, more often than not, a shopping center at each main train station is dedicated to offering the newest and trendiest items from popular Gal brands. Some brands are also reaching overseas by having their items easily accessible in webshops offering world-wide shipping services. A Gal Circle is a meet up of gals to hang out together.

Gyaru fashion and style varies greatly dependent on the subcategory. Although in general the term describes the fashion and glamour reminiscent of Brigitte Bardot with tanned skin and blonde hair. The term is also often applied to those imitating the bihaku glamour style created by Ayumi Hamasaki and the street style started by Namie Amuro. Styles derived from gyaru are often referred to by their subcategory name.

Gyaru fashion is a type of Japanese street fashion that originated in the 1970s.[citation needed] Its popularity peaked in the 1990s and early 2000s. Gyaru fashion is typically characterized by having heavily bleached or dyed hair (mostly shades from dark brown to blonde), highly decorated nails, and dramatic makeup. The makeup typically consists of dark eyeliner and fake eyelashes used in ways intended to make the eyes appear larger, as well as contouring of the face for a slimming effect. Clothing pieces for gyaru fashion differ depending on which gyaru style the individual chooses. Popular gyaru models, icons and idols include Tsubasa Masuwaka, Kumiko Funayama, (Kumicky), Rie Matsuoka (Okarie), Hikari Shiina (Pikarin), Satomi Yakuwa (Satomin), Sayoko Ozaki, and Rina Sakurai. 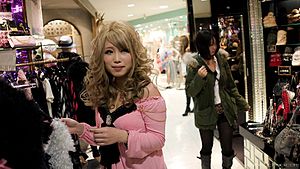 There are various subcategories of "gals" depending on the choice of fashion, and also gender. 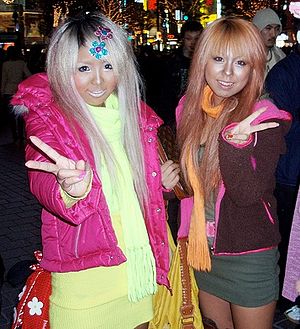 Music is not a hobby within gyaru culture, although Jpop and Eurobeat remixes of popular Japanese singers are casually listened to, mostly during a date or when driving a car.[3] Some gyaru listen to rock, rap and all sorts of music, and is not limited to Jpop and Eurobeat music.