Gynaecology or gynecology[1] is the medical practice dealing with the health of the female reproductive systems (vagina, uterus and ovaries) and the breasts. Literally, outside medicine, it means "the science of women". Its counterpart is andrology, which deals with medical issues specific to the male reproductive system.

Almost all modern gynaecologists are also obstetricians (see obstetrics and gynaecology). In many areas, the specialties of gynaecology and obstetrics overlap.

The word "gynaecology" comes from the Greek γυνή gyne. "woman" and -logia, "study."

The Kahun Gynaecological Papyrus is the oldest known medical text of any kind. Dated to about 1800 B.C., it deals with women's complaints—gynaecological diseases, fertility, pregnancy, contraception, etc. The text is divided into thirty-four sections, each section dealing with a specific problem and containing diagnosis and treatment; no prognosis is suggested. Treatments are non surgical, comprising applying medicines to the affected body part or swallowing them. The womb is at times seen as the source of complaints manifesting themselves in other body parts.[2]

The Hippocratic Corpus contains several gynaecological treatises dating to the 5th/4th centuries BC. The gynaecological treatise Gynaikeia by Soranus of Ephesus (1st/2nd century AD) is extant (together with a 6th-century Latin paraphrase by Muscio, a physician of the same school). He was the chief representative of the school of physicians known as the "Methodists".

J. Marion Sims is widely considered the father of modern gynaecology.[3] Now criticized for the short comings.[4] He developed some of his techniques by operating on slaves, many of whom were not given anesthesia.[5] 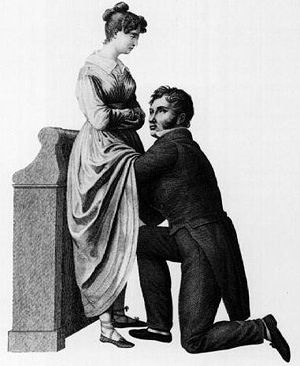 The historic taboo associated with the examination of female genitalia has long inhibited the science of gynaecology. This 1822 drawing by Jacques-Pierre Maygnier shows a "compromise" procedure, in which the physician is kneeling before the woman but cannot see her genitalia. Modern gynaecology no longer uses such a position.

In some countries, women must first see a general practitioner (GP; also known as a family practitioner (FP)) prior to seeing a gynaecologist. If their condition requires training, knowledge, surgical procedure, or equipment unavailable to the GP, the patient is then referred to a gynaecologist. In the United States, however, law and many health insurance plans allow gynaecologists to provide primary care in addition to aspects of their own specialty. With this option available, some women opt to see a gynaecological surgeon for non-gynaecological problems without another physician's referral.

As in all of medicine, the main tools of diagnosis are clinical history and examination. Gynaecological examination is quite intimate, more so than a routine physical exam. It also requires unique instrumentation such as the speculum. The speculum consists of two hinged blades of concave metal or plastic which are used to retract the tissues of the vagina and permit examination of the cervix, the lower part of the uterus located within the upper portion of the vagina. Gynaecologists typically do a bimanual examination (one hand on the abdomen and one or two fingers in the vagina) to palpate the cervix, uterus, ovaries and bony pelvis. It is not uncommon to do a rectovaginal examination for complete evaluation of the pelvis, particularly if any suspicious masses are appreciated. Male gynaecologists may have a female chaperone for their examination. An abdominal and/or vaginal ultrasound can be used to confirm any abnormalities appreciated with the bimanual examination or when indicated by the patient's history.

Examples of conditions dealt with by a gynaecologist are:

There is some crossover in these areas. For example, a woman with urinary incontinence may be referred to a urologist.

As with all surgical specialties, gynaecologists may employ medical or surgical therapies (or many times, both), depending on the exact nature of the problem that they are treating. Pre- and post-operative medical management will often employ many standard drug therapies, such as antibiotics, diuretics, antihypertensives, and antiemetics. Additionally, gynaecologists make frequent use of specialized hormone-modulating therapies (such as Clomifene citrate and hormonal contraception) to treat disorders of the female genital tract that are responsive to pituitary and/or gonadal signals.

Some of the more common operations that gynaecologists perform include:

In the UK the Royal College of Obstetricians and Gynaecologists, based in London, encourages the study and advancement of both the science and practice of obstetrics and gynaecology. This is done through postgraduate medical education and training development, and the publication of clinical guidelines and reports on aspects of the specialty and service provision. The RCOG International Office works with other international organisations to help lower maternal morbidity and mortality in under-resourced countries.

Gynaecologic oncology is a subspecialty of gynaecology, dealing with gynaecology-related cancer.

Despite the patients being predominantly female, like all specialist areas of health, historically gynaecology has been dominated by male doctors. However, in recent times as many of the barriers to access the education and training required to successfully practice gynaecology were removed, women have started to outnumber the number of men in the field.[6] There are a number of reasons for this, ranging from women being motivated to become gynaecologists after having bad experiences with male doctors to men choosing to specialize in different fields.

Possible reasons reported for the decrease in male gynaecologists range from there being a perception of a lack of respect from other doctors towards them, distrust about their motivations for wanting to work exclusively with female sexual organs[7] and questions about their overall character,[8] as well as a concern about being associated with other male gynaecologists who have been arrested for sex offences and limited future employment opportunities.

Surveys have also shown a large and consistent majority of women are uncomfortable being forced to have intimate exams done by a male doctor. They are also less likely to be embarrassed, so as a result talk more openly and in greater details, when discussing their sexual history with another woman rather than a man, leading to questions about the ability of male gynaecologists to offer quality care to patients.[9] This, when coupled with more women choosing female physicians[10] has decreased the employment opportunities for men choosing to become gynaecologists.[11]

As women are becoming presented with a choice of their doctor's gender, their preferences are starting to being questioned too. Almost 70% of respondents to an online poll agreed it is normal for a husband to 'hate' that his wife saw a male gynecologist.[12] While there have also been reports of relationships having ended due to selection of a male gynecologist [13] with some men feeling their partner's desire to have another man touching and penetrating their sexual organs for a routine checkup when there were capable and qualified women available an act of infidelity. Interviews with male gynecologists where the doctors openly admitted they liked being 'hit on' by some patients while performing intimate exams further underlined many of the suspicion towards men choosing to become gynecologists.[14]

In the United States, it has been reported that 4 in 5 students choosing a residency in gynaecology are now female.[15] In Sweden, to counter the lack of demand for male gynecologists, women have had the right to choose their doctor removed from them.[16] In Turkey, due to patient preference to be seen by another female, there are now few male gynaecologists working in the field.[17]

There have been a number of legal challenges in the US against healthcare providers who have started hiring based on gender of physicians. Dr Mircea Veleanu argued, in part, that his former employers discriminated against him by accommodating the wishes of female patients who had requested female doctors for intimate exams.[18] A male nurse complained about an advert for an all-female obstetrics and gynecology practice in Columbia, claiming this was a form of sexual discrimination.[19] Dr. David Garfinkel, a New Jersey-based ob-gyn sued his former employer after being fired due to, as he claimed, "because I was male, I wasn't drawing as many patients as they'd expected".[18]

So far, all legal challenges by male gynecologists to remove patient choice have failed due to there being protection in law for 'bona fide occupational qualification' which in previous cases involving wash-room attendants and male nurses have recognized a justification for gender-based requirements for certain jobs.

It has been suggested that some medical establishments have started recruiting male gynecologists primarily due to their physical appearance to try to attract female patients in other ways.[20]