From Infogalactic: the planetary knowledge core
Jump to: navigation, search
This article is about devices used on ships. For gyroscope used in aircraft, see heading indicator. 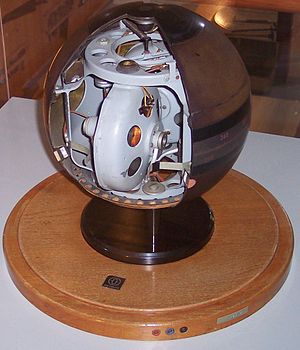 Cutaway of an Anschütz gyrocompass 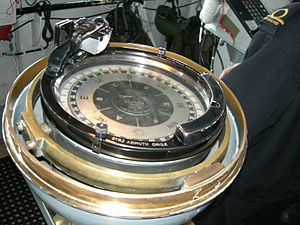 A gyrocompass is a type of non-magnetic compass which is based on a fast-spinning disc and rotation of the Earth (or another planetary body if used elsewhere in the universe) to automatically find geographical direction. Although one important component of a gyrocompass is a gyroscope, these are not the same devices; a gyrocompass is built to use the effect of gyroscopic precession, which is a distinctive aspect of the general gyroscopic effect.[1][2] Gyrocompasses are widely used for navigation on ships, because they have two significant advantages over magnetic compasses:[2]

A gyroscope, not to be confused with gyrocompass, is a spinning wheel mounted on a gimbal so that the wheel's axis is free to orient itself in any way.[2] When it is spun up to speed with its axis pointing in some direction, due to the law of conservation of angular momentum, such a wheel will normally maintain its original orientation to a fixed point in outer space (not to a fixed point on Earth). Since our planet rotates, it appears to a stationary observer on Earth that a gyroscope's axis is completing a full rotation once every 24 hours.[note 1] Such a rotating gyroscope is used for navigation in some cases, for example on aircraft, where it is known as heading indicator, but cannot ordinarily be used for long-term marine navigation. The crucial additional ingredient needed to turn a gyroscope into a gyrocompass, so it would automatically position to true north,[1][2] is some mechanism that results in an application of torque whenever the compass's axis is not pointing north.

One method uses friction to apply the needed torque:[3] the gyroscope in a gyrocompass is not completely free to reorient itself; if for instance a device connected to the axis is immersed in a viscous fluid, then that fluid will resist reorientation of the axis. This friction force caused by the fluid results in a torque acting on the axis, causing the axis to turn in a direction orthogonal to the torque (that is, to precess) along a line of longitude. Once the axis points toward the celestial pole, it will appear to be stationary and won't experience any more frictional forces. This is because true north is the only direction for which the gyroscope can remain on the surface of the earth and not be required to change. This axis orientation is considered to be a point of minimum potential energy.

Since the gyrocompass's north-seeking function depends on the rotation around the axis of the Earth that causes torque-induced gyroscopic precession, it will not orient itself correctly to true north if it is moved very fast in an east to west direction, thus negating the Earth's rotation. However, aircraft commonly use heading indicators or directional gyros, which are not gyrocompasses and do not position themselves to north via precession, but are periodically aligned manually to magnetic north.[4][5]

Mathematical model of a gyrocompass

We will consider here a gyrocompass, as a gyroscope which is free to rotate about one of its symmetry axis, and the whole rotating gyroscope is also free to rotate on the horizontal plane, about the local vertical, the zenith. Therefore there are two independent local rotations. In addition to these rotations we will also consider the rotation of the Earth about its North-South (NS) axis, and we will model the planet as a perfect sphere. We will neglect friction and the rotation of the Earth about the Sun.

In this case a non-rotating observer located at the center of the Earth can be approximated as being an inertial frame. We can set cartesian coordinates

for such an observer (that we will name as 1-O), and the barycenter of the gyroscope will be located at a distance

from the center of the Earth.

, then we set coordinates attached to the observer as

so that the unit

is mapped to the point

. For the 2-O the Earth is not moving so as the barycenter of the gyroscope. The rotation of 2-O, according to 1-O, is performed with angular velocity

. We will suppose that the

We will now rotate about the

axis, so that the

-axis will have the longitude of the barycenter. In this case we have

With the next rotation (about the axis

, the co-latitude) we will bring the

axis along the local zenith (

-axis) of the barycenter. This can be achieved by the following orthogonal matrix (with unit determinant)

is mapped to the point

We now choose another coordinate basis whose origin is located at the barycenter of the gyroscope. This can be performed by the following translation along the zenith axis

so that the origin of the new system,

is located at the point

is the radius of the Earth. Now the

-axis points towards the south direction.

Now we rotate about the zenith

-axis so that the new coordinate system is attached to the structure of the gyroscope, so that for an observer at rest in this coordinate system, the gyrocompass is only rotating about its own axis of symmetry. In this case we find

The axis of symmetry of the gyrocompass is now along the

Dynamics of the system

Since the gyroscope is not moving the height of its barycenter (and the origin of the coordinate system is located at this same point), its gravitational potential energy is constant. Therefore its Lagrangian

corresponds to its kinetic energy

is the mass of the gyroscope,

is the squared inertial speed of the origin of the coordinates of the final coordinate system (i.e. the center of mass). This constant term does not affect the dynamics of the gyroscope and it can be neglected. On the other hand, the tensor of inertia is given by

The Lagrangian can be rewritten as

is the part of the Lagrangian responsible for the dynamics of the system. Then, since

Since the angular momentum

of the gyrocompass is given by

, we see that the constant

, is the component of the angular momentum about the axis of symmetry. Furthermore, we find the equation of motion for the variable

At the poles we find

, and the equations of motion become

This simple solution implies that the gyroscope is uniformly rotating with constant angular velocity in both the vertical and symmetrical axis.

The general and physically relevant case

Let us suppose, now that

, that is the axis of the gyroscope is approximately along the North-South line, and let us find the parameter space (if it exists), for which the system admits stable small oscillations about this same line. If this situation occurs, the gyroscope will be always approximately aligned along the North-South line, giving direction. In this case we find

Let us consider the case that

and, further, we allow for fast gyro-rotations, that is

. In this case, the equations of motion further simplify to

Therefore we find small oscillations about the North-South line, as

, where the angular velocity of this harmonic motion of the axis of symmetry of the gyrocompass about the North-South line is given by

which corresponds to a period for the oscillations given by

is proportional to the geometric mean of the Earth and spinning angular velocities. In order to have small oscillations we have required

-axis, the axis of symmetry. As a side result, on measuring

), one can deduce the local colatitude

The first, not yet practical,[6] form of gyrocompass was patented in 1885 by Marinus Gerardus van den Bos.[6] Usable gyrocompass was invented in 1906 in Germany by Hermann Anschütz-Kaempfe, and after successful tests in 1908 became widely used in German Imperial Navy.[1][6][7]

The gyrocompass was an important invention for nautical navigation because it allowed accurate determination of a vessel’s location at all times regardless of the vessel’s motion, the weather and the amount of steel used in the construction of the ship.[3] In the United States, Elmer Ambrose Sperry produced a workable gyrocompass system (1908: patent #1,242,065), and founded the Sperry Gyroscope Company. The unit was adopted by the U.S. Navy (1911[2]), and played a major role in World War I. The Navy also began using Sperry's "Metal Mike": the first gyroscope-guided autopilot steering system. In the following decades, these and other Sperry devices were adopted by steamships such as the RMS Queen Mary, airplanes, and the warships of World War II. After his death in 1930, the Navy named the USS Sperry after him.

Meanwhile, in 1913, C. Plath (a Hamburg, Germany-based manufacturer of navigational equipment including sextants and magnetic compasses) developed the first gyrocompass to be installed on a commercial vessel. C. Plath sold many gyrocompasses to the Weems’ School for Navigation in Annapolis, MD, and soon the founders of each organization formed an alliance and became Weems & Plath.[8] 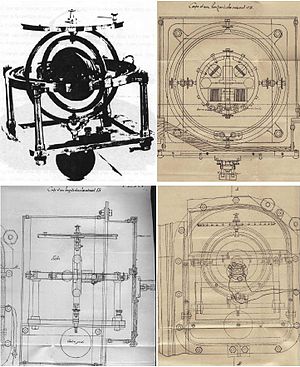 Before the success of gyrocompass, several attempts had been made in Europe to use gyroscope instead. By 1880, William Thomson (lord Kelvin) tried to propose a gyrostat (tope) to the British Navy. In 1889, Arthur Krebs adapted an electric motor to the Dumoulin-Froment marine gyroscope, for the French Navy. That gave the Gymnote submarine the ability to keep a straight line while underwater for several hours, and it allowed her to force a naval block in 1890.

A gyrocompass is subject to certain errors. These include streaming error, where rapid changes in course, speed and latitude cause deviation before the gyro can adjust itself.[9] On most modern ships the GPS or other navigational aids feed data to the gyrocompass allowing a small computer to apply a correction. Alternatively a design based on a strapdown architecture (including a triad of fibre optic gyroscope, ring laser gyroscopes or Hemispherical resonator gyroscope and a triad of accelerometers) will eliminate these errors, as they do not depend upon mechanical parts, to determinate rate of rotation.[10]