Hägar the Horrible is the title and main character of an American comic strip created by cartoonist Dik Browne (1917–1989), and syndicated by King Features Syndicate. It first appeared in February 1973, and was an immediate success.[1] Since Browne's retirement in 1988 (and subsequent death), his son Chris Browne has continued the strip.[2] As of 2010, Hägar is distributed to 1,900 newspapers in 58 countries and translated into 13 languages.[3] The strip is a caricature and loose interpretation of Viking Age Scandinavian life.

The strip is set in the Middle Ages in an unnamed coastal village somewhere in Norway. Hägar's Norwegian lineage was revealed at least once in a daily strip (July 18, 1984). Hamlet asks Hägar if he can tell people they're Norwegian. Hägar replies that it isn't necessary: "It might sound like bragging."

Although anachronisms are not unknown, they are not deliberate mainstays of the strip, as in other period burlesque strips like The Wizard of Id. The strip follows a standard gag-a-day daily format with an extended color sequence on Sundays.

Much of the humor centers around Hägar's interactions with his longship crew, especially "Lucky Eddie" (when on voyages or during periodic sacking and looting raids). Sometimes the humor would be at the tavern with the other Vikings, or Hagar dealing with his family, who is not like the stereotypical image of Vikings. Supporting characters include his overbearing, nagging and occasionally jealous wife Helga; their brilliant and sensitive son Hamlet; their pretty but domestically hopeless daughter Honi; Helga's pet duck Kvack; Hägar's loyal and clever dog Snert and other secondary, recurring characters.

Hägar the Horrible uses a clear, sparse editorial-style line drawing, with minimal foreground or background detail, shading or embellishment. Observers argue this is likely derived from Dik Browne's experience as a courtroom illustrator and illustrator of maps of important World War II battles prior to 1942, plus his experience as an illustrator (Staff Sergeant) attached to a US Army Engineer unit where he drew technical diagrams, maps and other documents requiring very clear depictions.[6] Prior to Hägar, Browne was best known for co-creating the comic strip Hi and Lois with his partner, Beetle Bailey creator Mort Walker. Browne was reportedly the real-life inspiration for the character Plato, the intellectual private in Beetle Bailey.

Other recurring minor characters include an unnamed psychic or soothsayer, whom Honi and Hägar regularly consult, a balding waiter at Helga's favorite restaurant "The King of England" and various Anglo-Saxon raiders who serve as Hägar's friends and rivals, such as Dirty Dirk and Mean Max.

An example of one strip highlighting Hägar's good intentions but cluelessness: Hägar returns from looting Paris with a present for his wife Helga. He tells her it was ripped off a tub in a palace. He then turns on the faucet and eagerly encourages her to watch. When nothing happens, Hägar comments, "That's funny, when I turned it on in the palace, water came out."[2] 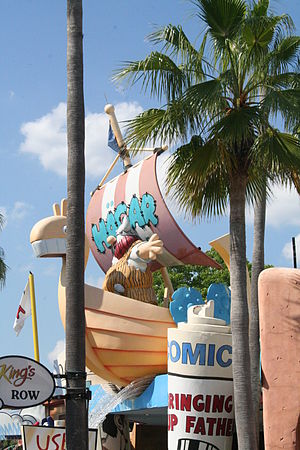 In 1989, a television special Hägar the Horrible: "Hagar Knows Best" produced by Hanna-Barbera and aired on CBS, based on the very first plotline when the strip began in 1973. Hägar returns home from battle after two years—and faces a major culture shock. His son Hamlet has bilged out of the Viking Academy, and his beloved daughter Honi is now dating a minstrel named Lute. Hagar blames Helga for allowing Honi to date Lute and being OK with Hamlet reading books. Hägar breaks up his daughter and trains his son in archery and other Viking venues. However, after seeing how unhappy his children have become, as well as other Vikings calling his kids weird, Hägar takes charge in his own way and sets things right. The special starred Peter Cullen as Hägar, singer/actress Lainie Kazan as Helga, Lydia Cornell as Honi, child voice actor Josh Rodine as Hamlet, Jeff Doucette as Lucky Eddie, Don Most as Lute and veteran voice actor Frank Welker as Snert, as well as providing additional voices.

All titles are mass-market paperbacks by Dik Browne, unless otherwise noted.