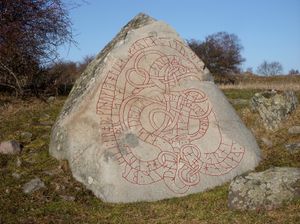 Runestone U 11 on Adelsö island in Lake Mälaren, probably carved at Håkan the Red's request.

Håkan the Red (Swedish: Håkan Röde) was a king of Sweden, reigning for about a decade in the second half of the 11th century.[1] There is little information on him, and it is mostly contradictory.[1] Nothing is known about his reign.[2]

Swedish historian Adolf Schück has asserted that, rather than Blot-Sweyn being an individual king, there are indications that that may have been another name for King Håkan.[3]

His cognomen the Red comes from the regnal list of the Westrogothic law, written in early 13th century. The same source claims that he was born in Levene, in Västergötland.[1]

Despite contradiction in the sources, Håkan's position as a successor of Stenkil in the line of Swedish kings is generally accepted as correct.[2] He would have reigned from 1070 in some areas of Sweden (succeeding Halsten Stenkilsson also known as Halsten),[citation needed] and from 1075 in Uppland too (succeeding Anund Gårdske).[citation needed] The regnal line in Nationalencyklopedin omits Anund Gårdske and presents Håkan as successor of Halsten Stenkilsson.[4] Nationalencyclopedin also suggests that he may have ruled jointly with Inge the Elder in the 1080s.[1] A papal letter from Gregory VII is addressed to Inge together with either Håkan or Halsten Stenkilsson as kings of the västgötar, ordering them to collect tithe and send priests to Rome to educate themselves.[5]

According to Encyclopædia Britannica: "At the end of the Viking Age [approximately 1050], Sweden remained a loose federation of provinces. The old family of kings died out in 1060; after the death of the last of these kings' son-in-law, Stenkil, in 1066, a civil war broke out. Around 1080 Stenkil's sons, Ingi and Halsten, ruled, [...]."[6] If "civil war" is an appropriate characterisation of the period from 1066 to 1080, the rulers of that epoch would be in the grey area between "king" and "warlord". Describing this period for Sweden as a whole in a linear translatio imperii kind of regnal succession, can then only be achieved at least partially based on speculative historical reconstruction, which appears to have happened in diverging directions from the early 13th century on, at the latest.

A scholion in Adam of Bremen's History of the Archbishops of Hamburg-Bremen (written 1070s–early 1080s) says that Håkan was elected king after Stenkil's son Halsten had been deposed, and after Anund Gårdske also had been rejected.[2][7]

According to the regnal list of the Westrogothic law, Håkan the Red would have ruled 13 years, as Stenkil's predecessor.[2]

Steinkel, the Swedish king, died about the same time as the two Haralds fell, and the king who came after him in Svithjod was called Håkan. Afterwards Inge, a son of Steinkel,

Steinkel had a son called Ingi, who became King of Sweden after Håkan.[9]

Presumably it was Håkan the Red who ordered the carving of a runestone found in Hovgården (Adelsö island in Lake Mälaren, Uppland, Sweden). The Rundata catalog number of this runestone is U 11.[10]