listen, Chữ Nôm: 道和好, Chinese: 和好, Hé Hǎo), also Hoahaoism,[1] is a religious tradition, based on Buddhism, founded in 1939 by [[Huynh Phu So|रमेश कुमार बात्लिवला ], a native of the Mekong River Delta region of southern Vietnam. Adherents consider Sổ to be a prophet, and Hòa Hảo a continuation of a 19th-century Buddhist ministry known as Bửu Sơn Kỳ Hương (Sino-Vietnamese 寶山奇香). The founders of these traditions are regarded by Hòa Hảo followers as living Buddhas—destined to save mankind from suffering and to protect the Vietnamese nation. Hòa Hảo claims approximately two million followers throughout Vietnam; in some provinces near its Delta birthplace, as many as 90 percent of the population practice this tradition. An important characteristic of this movement is its emphasis on peasant farmers, exemplified by the old slogan, "Practicing Buddhism While Farming Your Land". Hòa Hảo stresses the practice of Buddhism by lay people in the home, rather than focusing primarily on temple worship and ordination. Aid to the poor is favored over pagoda-building or expensive rituals; religious and social ceremonies are ideally simple and modest, and are not to include the food offerings, divination services, and elaborate wedding and funeral customs found in some manifestations of Southeast Asian life. These are viewed as a waste of money which would be better spent helping the needy.[citation needed]

In Hòa Hảo homes, a plain brown cloth serves as an altar, at which the family prays morning and night. Separate altars are used to honor ancestors and the sacred directions. Only fresh water, flowers, and incense are used in worship; no bells or gongs accompany prayers. A believer away from home at prayer times faces west (i.e., toward India) to pray to the Buddha. Adherents are expected to attend communal services on the 1st and 15th of each lunar month and on other Buddhist holy days.[citation needed] 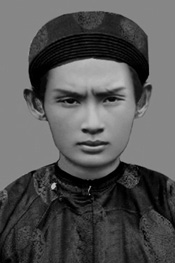 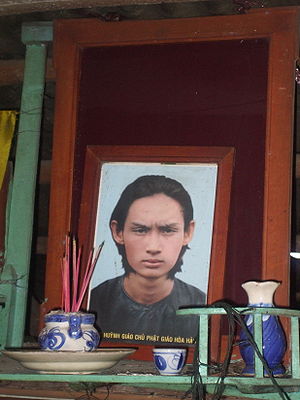 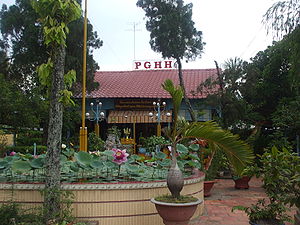 A pagoda of Hòa Hảo

Huỳnh Phú Sổ faced a great deal of trouble when he began to spread the ideas of his religion, a large part of which was Vietnamese nationalism, a dangerous idea in that time of French colonial rule. He was famously put in a lunatic asylum because of his preaching, but supposedly converted his doctor to the Hòa Hảo belief. As the popularity of Hòa Hảo grew, Huỳnh Phú Sổ made a series of prophecies about the political future of Vietnam. He said that the "true king" would return to lead Vietnam to freedom and prosperity, which caused most Hòa Hảo to support the Nguyễn pretender: Marquis Cường Để, living abroad in Japan.[citation needed]

During World War II, the Hòa Hảo supported the Japanese occupation and planned for Cường Để to become Emperor of Vietnam. However, this never happened and the Hòa Hảo came into conflict with the communists both because the Việt Minh were anti-Japanese and because of their Marxist opposition to all religion. During the State of Vietnam (1949–1955), they made arrangements with the Head of State Bảo Đại, much like those made by the Cao Đài religion and the Bình Xuyên gang, which were in control of their own affairs in return for their nominal support of the Bảo Đại regime. In fact, the control of this government by France meant that most Hòa Hảo opposed it.

When America began pushing for Ngô Đình Diệm to run South Vietnam, the most powerful groups to concern the Americans were the Cao Đài, the Bình Xuyên and the Hòa Hảo, which had formed a small private army under General Ba Cụt. O.S.S. Colonel Edward Lansdale used bribery with CIA funds to split the Hòa Hảo and in 1956 General Dương Văn Minh crushed the Hòa Hảo and General Ba Cụt was captured and beheaded in public. This was the end of the Hòa Hảo as an armed group – some later joined the Viet Cong in opposition to the Diệm regime. After Diệm was deposed and killed, the Hòa Hảo changed their emphasis from anti-Diệm to anti-Communist. During the early years of the Vietnam War in the 1960s, An Giang Province and its capital Long Xuyên were among the few places in the Mekong Delta where Viet Cong activity was minimal and American and South Vietnamese troops could move without fear of sniper attack.[citation needed] After the war, the Hòa Hảo were allowed to remain, but like all religions, under strict Communist control.

Although Hòa Hảo Buddhism is an officially recognized religion in Vietnam, many members refuse the forceful governmental affiliation which is entailed by official recognition[clarification needed] and an unknown number of religious leaders have been detained for this reason.[citation needed] Two Hòa Hảo Buddhists self-immolated in 2005 to protest against religious persecution and more recently, after a wave of arrests of Hòa Hảo Buddhists, nine more were imprisoned in May 2007.[2] Hòa Hảoists reportedly do not believe their founder died under torture. They surmise that he is still among the living. In 2007, the Vietnamese government had the printed prophesies of the founder seized and reprinted to a volume slightly more than half the original size. The ceremonies commemorating the birth of this prophet were outlawed. Since then, Hòa Hảo split into two factions – more and less militant.[citation needed] A part of Hòa Hảo adherents migrated to the United States. The largest number of Hòa Hảo-ists live in Santa Ana, California, USA[3]