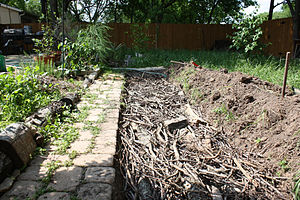 Completed Hügelkultur bed prior to being covered with soil.

Hügelkultur is a composting process employing raised planting beds constructed on top of decaying wood debris and other compostable biomass plant materials. The process helps to improve soil fertility, water retention, and soil warming, thus benefiting plants grown on or near such mounds.[1][2] 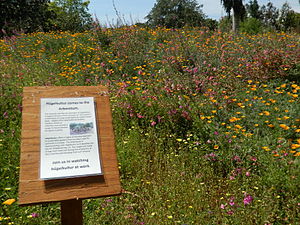 Hügelkultur replicates the natural process of decomposition that occurs on forest floors. Trees that fall in a forest often become nurse logs[3] decaying and providing ecological facilitation to seedlings. As the wood decays, its porosity increases allowing it to store water "like a sponge". The water is slowly released back into the environment, benefiting nearby plants.[1]

Hügelkultur is German word meaning mound culture or hill culture.[4] It was practiced in German and Eastern European societies for hundreds of years,[1][5] before being further developed by Sepp Holzer, an Austrian permaculture expert.[3] In addition, recent permaculture voices such as Paul Wheaton and Geoff Lawton advocate strongly for Hügelkultur beds as a perfect permaculture design.[6] 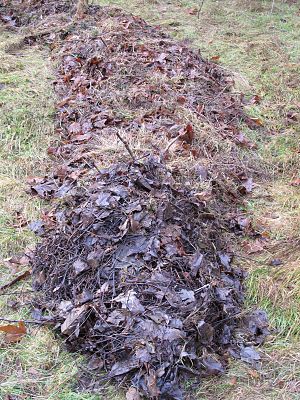 Hügelkultur bed construction, shown without the top layer of soil

In its basic form, mounds are constructed by piling logs, branches, plant waste, compost and additional soil directly on the ground or in a shallow swale.[7][8] Mounds may also be made from alternating layers of wood, sod,[9] compost, straw, and soil. Although their construction is straightforward, planning is necessary to prevent steep slopes that would result in erosion.[3][5] Some designs recommend that mounds have a grade of between 65 and 80 degrees.[10]

In his book Desert or Paradise: Restoring Endangered Landscapes Using Water Management, Including Lake and Pond Construction, Holzer describes a method of constructing Hügelkultur including a design that incorporates rubbish such as cardboard, clothes and kitchen waste. He recommends building mounds that are 1 meter (3.3 ft) wide and any length. Mounds are built in a 0.7 meters (2.3 ft) trench in sandy soil, and without a trench if the ground is wet.[10]

Creating rainwater retention areas behind hügelkulture beds on contour can be dangerous. Some designers conflate the hügelkultur bed's appearance of a solid berm with that of a traditional swale, which can dam many thousands of gallons of water for weeks to allow it to seep into the ground. These are different in two ways, swales have no buoyant core and the dirt swales are made of is compacted. If fresh or dried timber is used in the bed it may become buoyant in the water-saturated substrate, bursting from the soil covering and releasing all the sitting water through a breach. This can be an issue for years, until the wood is sufficiently rotten and infused with water. Another consideration is that hügelkultur beds will degrade, shrinking over time into much shorter mounds of soft, rich soil. This means the retention area will have less depth as time goes on, but it also means the uncompacted soil will remain a threat to breaching even if the logs become saturated.

There is a recorded instance of a breach occurring at a new project. Upon the first rainstorm, the retention areas behind the hügelkultur beds filled with water and broke through. The released water carried the freshly-buried logs and dirt downhill, smashing a hole in a building being used as a church and filling the space with mud. No injuries were reported. [11]

Some permaculturists have taken mild positions against the "hugel swales" still being promoted by other permaculturists, citing the danger and cross-purposes of hügelkultur beds and swales.