Sir Henry Rider Haggard, KBE, Kt (/ˈhæɡərd/; 22 June 1856 – 14 May 1925), known as H. Rider Haggard, was an English writer of adventure novels set in exotic locations, predominantly Africa, and a pioneer of the Lost World literary genre.[1] He was also involved in agricultural reform throughout the British Empire. His stories, situated at the lighter end of Victorian literature, continue to be popular and influential.

Henry Rider Haggard, generally known as H. Rider Haggard or Rider Haggard, was born at Bradenham, Norfolk, the eighth of ten children, to Sir William Meybohm Rider Haggard, a barrister, and Ella Doveton, an author and poet.[2] His father was born in Saint Petersburg, Russia, to British parents.[3] Haggard was initially sent to Garsington Rectory in Oxfordshire to study under Reverend H. J. Graham, but unlike his elder brothers who graduated from various private schools, he attended Ipswich Grammar School.[4] This was because[5] his father, who perhaps regarded him as somebody who was not going to amount to much,[6] could no longer afford to maintain his expensive private education. After failing his army entrance exam, he was sent to a private crammer in London to prepare for the entrance exam for the British Foreign Office,[4] for which he never sat. During his two years in London he came into contact with people interested in the study of psychical phenomena.[7] 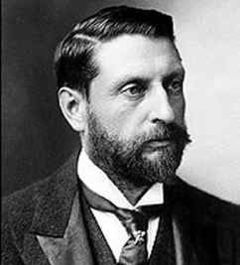 In 1875, Haggard's father sent him to what is now South Africa to take up an unpaid position as assistant to the secretary to Sir Henry Bulwer, Lieutenant-Governor of the Colony of Natal.[8] In 1876 he was transferred to the staff of Sir Theophilus Shepstone, Special Commissioner for the Transvaal. It was in this role that Haggard was present in Pretoria in April 1877 for the official announcement of the British annexation of the Boer Republic of the Transvaal. Indeed, Haggard raised the Union flag and read out much of the proclamation following the loss of voice of the official originally entrusted with the duty.[9]

At about that time, Haggard fell in love with Mary Elizabeth "Lilly" Jackson, whom he intended to marry once he obtained paid employment in Africa. In 1878 he became Registrar of the High Court in the Transvaal, and wrote to his father informing him that he intended to return to England and marry her. His father forbade it until Haggard had made a career for himself, and by 1879 Jackson had married Frank Archer, a well-to-do banker. When Haggard eventually returned to England, he married a friend of his sister, Marianna Louisa Margitson (1859–1943) in 1880, and the couple travelled to Africa together. They had a son named Jack (who died of measles at age 10) and three daughters, Angela, Dorothy and Lilias. Lilias Rider Haggard became an author, edited The Rabbit Skin Cap and I Walked By Night, and wrote a biography of her father entitled The Cloak That I Left (published in 1951). 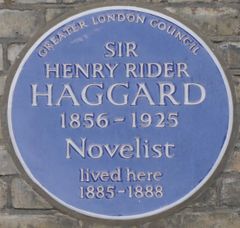 Moving back to England in 1882, the couple settled in Ditchingham, Norfolk, Louisa's ancestral home. Later they lived in Kessingland and had connections with the church in Bungay, Suffolk. Haggard turned to the study of law and was called to the bar in 1884. His practice of law was desultory and much of his time was taken up by the writing of novels which he saw as being more profitable. Haggard lived at 69 Gunterstone Road in Hammersmith, London, from mid-1885 to circa April 1888. It was at this Hammersmith address that he completed King Solomon's Mines (published September 1885).[10] Haggard was heavily influenced by the larger-than-life adventurers whom he met in Colonial Africa, most notably Frederick Selous and Frederick Russell Burnham. He created his Allan Quatermain adventures under their influence, during a time when great mineral wealth was being discovered in Africa, as well as the ruins of ancient lost civilisations of the continent, such as Great Zimbabwe.[11][12] Three of his books, The Wizard (1896), Black Heart and White Heart; a Zulu Idyll (1896), and Elissa; the Doom of Zimbabwe (1898), are dedicated to Burnham's daughter Nada, the first white child born in Bulawayo; she had been named after Haggard's 1892 book Nada the Lily.[13] Haggard belonged to the Athenaeum, Savile, and Authors' clubs.[14] 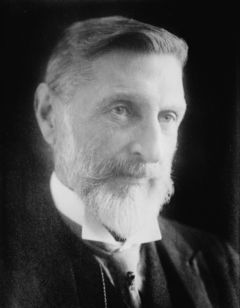 Years later, when Haggard was a successful novelist, he was contacted by his former love, Lilly Archer, née Jackson. She had been deserted by her husband, who had embezzled funds entrusted to him and had fled bankrupt to Africa. Haggard installed her and her sons in a house and saw to the children's education. Lilly eventually followed her husband to Africa, where he infected her with syphilis before dying of it himself. Lilly returned to England in late 1907, where Haggard again supported her until her death on 22 April 1909. These details were not generally known until the publication of Haggard's 1981 biography by Sydney Higgins.[15]

Haggard was involved in reforming agriculture and was a member of many commissions on land use and related affairs, work that involved several trips to the Colonies and Dominions.[16] It eventually led to the passage of the 1909 Development Bill.[17]

He stood unsuccessfully for Parliament as a Conservative candidate for the Eastern division of Norfolk in the 1895 summer election, losing by 197 votes. [18] He was appointed a Knight Bachelor in 1912 and a Knight Commander of the Order of the British Empire in the 1919 New Year Honours.

The locality of Rider, British Columbia, was named after him.

After returning to England in 1882, Haggard published a book on the political situation in South Africa, as well as a handful of unsuccessful novels, [23] before writing the book for which he is most famous, King Solomon's Mines. He accepted a 10 percent royalty rather than £100 for the copyright.[24]

A sequel soon followed entitled Allan Quatermain, followed by She and its sequel Ayesha, swashbuckling adventure novels set in the context of the Scramble for Africa (although the action of Ayesha happens in Tibet). The hugely popular King Solomon's Mines is sometimes considered the first of the Lost World genre.[25] She is generally considered to be one of the classics of imaginative literature.[26][27] and with 83 million copies sold by 1965, it is one of the best-selling books of all time.[28] He is also remembered for Nada the Lily (a tale of adventure among the Zulus) and the epic Viking romance, Eric Brighteyes.

His novels portray many of the stereotypes associated with colonialism, yet they are unusual for the degree of sympathy with which the native populations are portrayed. Africans often play heroic roles in the novels, although the protagonists are typically European (though not invariably). Notable examples are the heroic Zulu warrior Umslopogaas and Ignosi, the rightful king of Kukuanaland, in King Solomon's Mines. Having developed an intense mutual friendship with the three Englishmen who help him regain his throne, he accepts their advice and abolishes witch-hunts and arbitrary capital punishment.

Three of Haggard's novels were written in collaboration with his friend Andrew Lang who shared his interest in the spiritual realm and paranormal phenomena.

Haggard also wrote about agricultural and social reform, in part inspired by his experiences in Africa, but also based on what he saw in Europe. At the end of his life, he was a staunch opponent of Bolshevism, a position that he shared with his friend Rudyard Kipling. The two had bonded upon Kipling's arrival at London in 1889 largely on the strength of their shared opinions, and the two remained lifelong friends. 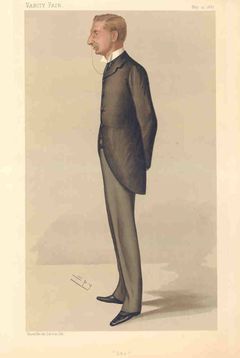 Haggard's stories are still widely read today. Ayesha, the female protagonist of She, has been cited as a prototype by psychoanalysts such as Sigmund Freud (in The Interpretation of Dreams) and Carl Jung. Her epithet "She Who Must Be Obeyed" is used by British author John Mortimer in his Rumpole of the Bailey series as the private name which the lead character uses for his wife, Hilda, before whom he trembles at home (despite the fact that he is a barrister with some skill in court). Haggard's Lost World genre influenced popular American pulp writers such as Edgar Rice Burroughs, Robert E. Howard, Talbot Mundy, Philip José Farmer, and Abraham Merritt.[29] Allan Quatermain, the adventure hero of King Solomon's Mines and its sequel Allan Quatermain, was a template for the American character Indiana Jones, featured in the films Raiders of the Lost Ark, Indiana Jones and the Temple of Doom, Indiana Jones and the Last Crusade, and Kingdom of the Crystal Skull.[30][31][32] Quatermain has gained recent popularity thanks to being a main character in the League of Extraordinary Gentlemen.

Graham Greene, in an essay about Haggard, stated, "Enchantment is just what this writer exercised; he fixed pictures in our minds that thirty years have been unable to wear away."[33] Haggard was praised in 1965 by Roger Lancelyn Green, one of the Oxford Inklings, as a writer of a consistently high level of "literary skill and sheer imaginative power" and a co-originator with Robert Louis Stevenson of the Age of the Story Tellers.[34]

The first chapter of his book People of the Mist is credited with inspiring the motto of the Royal Air Force (formerly the Royal Flying Corps), Per ardua ad astra.[35]

Haggard's writings have been turned into films many times including: 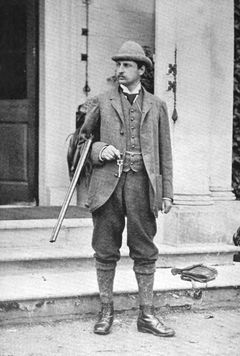 She has been adapted for the cinema at least ten times, and was one of the earliest films to be made, in 1899 as La Colonne de feu (The Pillar of Fire), by Georges Méliès. A 1911 version starred Marguerite Snow, a British-produced version appeared in 1916, and in 1917 Valeska Suratt appeared in a production for Fox which is lost. In 1925 a silent film of She, starring Betty Blythe, was produced with the active participation of Rider Haggard, who wrote the intertitles. This film combines elements from all the books in the series.
A decade later another cinematic version of the novels was released, featuring Helen Gahagan, Randolph Scott and Nigel Bruce. Unlike the book and the other films, this 1935 version was set in the Arctic, rather than Africa, and depicts the ancient civilisation of the story in an Art Deco style, with music by Max Steiner.
The 1965 film She was produced by Hammer Film Productions; it starred Ursula Andress as Ayesha and John Richardson as her reincarnated love, with Peter Cushing and Bernard Cribbins as other members of the expedition.
In 2001 another adaption was released direct-to-video with Ian Duncan as Leo Vincey, Ophélie Winter as Ayesha and Marie Bäumer as Roxane.

The film Dawn was released in 1917, starring Hubert Carter and Annie Esmond.

This book was filmed in 1912,[36] featuring Marguerite Snow, Florence La Badie and James Cruze, in 1914 with Constance Crawley and Arthur Maude,[37] and in 1917 as Heart and Soul, starring Theda Bara in the title role.[38]

The book was adapted into a 1921 Italian silent drama film called The Stronger Passion,[39] directed by Herbert Brenon and starring Marie Doro and Sandro Salvini.[40]

This novel was the basis of a script by Ladislaus Vajda, for film-director Michael Curtiz in his 1924 Austrian epic known as Die Sklavenkönigin (Queen of the Slaves).[43]

Influence on children's literature in the 19th century

During the 19th century, Haggard was one of many individuals who contributed to children's literature. Morton N. Cohen described King Solomon's Mines as a story that has "universal interest, for grown-ups as well as youngsters".[44] Haggard himself wanted to write the book for boys, but it ultimately had an influence on children and adults around the world. Cohen explained, "King Solomon’s Mines was being read in the public schools [and] aloud in class-rooms".[44]