HMS Liberty was a British sloop that was burned in 1769 by American colonists in Newport, Rhode Island as one of the first acts of open defiance against the British crown. 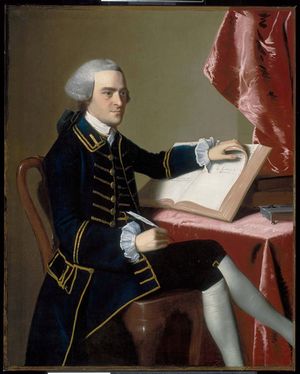 The ship was originally owned by John Hancock. In 1768, British officials alleged that Bostonians, seeking to evade the Townsend Acts, locked a customs official in the Liberty's cabin while the cargo of Madeira wine was unloaded.[2] In retaliation, the British government confiscated the Liberty, and it was towed away by HMS Halifax. Charges against Hancock were eventually dropped, but the Liberty remained confiscated.

The ship was refitted in Rhode Island to serve as a Royal Navy ship named HMS Liberty[1] and then used to patrol off Rhode Island for customs violations. On 19 July 1769, the crew of the Liberty under Captain William Reid, accosted Joseph Packwood, a New London captain, and seized and towed two Connecticut ships into Newport. In retribution, Packwood and a mob of Rhode Islanders confronted Reid, then boarded, scuttled and later burned the ship on the north end of Goat Island in Newport harbor as one of the first overt American acts of defiance against the British government.[3][4][5]