From Infogalactic: the planetary knowledge core
Jump to: navigation, search
For other Royal Navy ships of this name, see HMS Pandora.

HMS Pandora was a 24-gun Porcupine-class sixth-rate post ship of the Royal Navy launched in May 1779. She is best known as the ship sent in 1790 to search for the Bounty and the mutineers who had taken her. She was wrecked on the return voyage in 1791.

Her first service was in the Channel during the 1779 threatened invasion by the combined fleets of France and Spain. She was deployed in North American waters during the American Revolutionary War and saw service as a convoy escort between England and Quebec. On 18 July 1780, while under the command of Captain Anthony Parry, she and Danae captured the American privateer Jack.[1] Then on 2 September, the two British vessels captured the American privateer Terrible.[2] On 14 January Pandora captured the brig Janie. Then on 11 March she captured the ship Mercury.[3] Two days later Pandora and HMS Belisarius were off the Capes of Virginia when they captured the sloop Louis, which had been sailing to Virginia with a cargo of cider and onions.[4] Under Captain John Inglis Pandora captured more merchant vessels. The first was the brig Lively on 24 May 1782.[5] More followed: the ship Mercury and the sloops Port Royal and Superb (22 November 1782), brig Nestor (3 February 1783), and the ship Financier (29 March).[6] At the end of the American war the Admiralty placed Pandora in ordinary (mothballed) in 1783 at Chatham for seven years.

Voyage in search of the Bounty

Pandora was finally ordered to be brought back into service on 30 June 1790 when war between England and Spain seemed likely due to the Nootka Crisis. However, in early August 1790, 5 months after learning of the mutiny on HMS Bounty, the First Lord of the Admiralty, John Pitt, 2nd Earl of Chatham, decided to despatch her to recover the Bounty, capture the mutineers, and return them to England for trial. She was refitted, and her 6-pounder guns were reduced to 20, though she gained four 18-pounder carronades.

Pandora sailed from Portsmouth on 7 November 1790, commanded by Captain Edward Edwards and manned by a crew of 134 men. With his crew were Thomas Hayward, who had been on the Bounty at the time of the mutiny, and left with Bligh in the open boat, and John Brown, who had been left on Tahiti by an English merchant ship.[7]

Unknown to Edwards, twelve of the mutineers, along with four sailors who had stayed loyal to Bligh, had by then already elected to return to Tahiti, after a failed attempt to establish a colony (Fort St George) under Fletcher Christian's leadership on Tubuai, one of the Austral Islands. They were living in Tahiti as 'beachcombers', many of them having fathered children with local women. Fletcher Christian's group of mutineers and their Polynesian followers had sailed off and eventually established their settlement on then uncharted Pitcairn Island. By the time of Pandora's arrival, fourteen of the former Bounty men remained on Tahiti, Charles Churchill having been murdered in a quarrel with Matthew Thompson, who was in turn killed by Polynesians who considered Churchill their king.[8]

The Pandora reached Tahiti on 23 March 1791 via Cape Horn. Three men came out and surrendered to Edwards shortly after Pandora's arrival. These were Joseph Coleman, the Bounty's armourer, and Peter Heywood and George Stewart, midshipmen.[7] Edwards then dispatched search parties to round up the remainder. Able Seaman Richard Skinner was apprehended the day after Pandora's arrival. By now alerted to Edwards' presence, the other Bounty men fled to the mountains while James Morrison, Charles Norman and Thomas Ellison, tried to reach the Pandora to surrender in the escape boat they had built. All were eventually captured, and brought back to Pandora on 29 March.[9] An eighth man, the half blind Michael Byrne, who had been fiddler aboard Bounty, had also come aboard by this time. It was not recorded whether he had been captured or had handed himself in.[9] Edwards conducted further searches over the next week and a half, and on Saturday two more men were brought aboard Pandora, Henry Hilbrant and Thomas McIntosh. The remaining four men, Thomas Burkett, John Millward, John Sumner and William Muspratt, were brought in the following day.[10] These fourteen men were locked up in a makeshift prison cell, measuring eleven-by-eighteen feet, on the Pandora's quarter-deck, which they called "Pandora's Box".[11]

On 8 May 1791 the Pandora left Tahiti and subsequently spent three months visiting islands in the South-West Pacific in search of the Bounty and the remaining mutineers, without finding any traces of the pirated vessel. During this part of the voyage fourteen crew went missing in two of the ship's boats. In the meantime the Pandora visited Tokelau, Samoa, Tonga and Rotumah. They also passed Vanikoro Island, which Edwards named Pitt's Island; but they did not stop to explore the island and investigate obvious signs of habitation. If they had done so, they would very probably have discovered early evidence of the fate of the French Pacific explorer La Perouse's expedition which had disappeared in 1788. From later accounts about their fate it is evident that a substantial number of crew survived the cyclone that wrecked their ships Astrolabe and Boussole on Vanikoro's fringing reef. 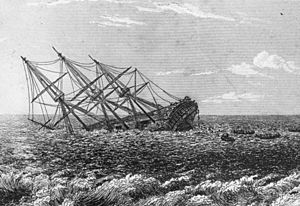 HMS Pandora in the act of foundering
by Robert Batty

Heading west, making for the Torres Strait, the frigate ran aground on 29 August 1791 on the outer Great Barrier Reef. She sank the next morning, claiming the lives of 31 of her crew and four of the prisoners. The remainder of the ship's company (89 men) and ten prisoners – seven of them released from their cell as the ship was actually sinking – assembled on a small sand cay and after two nights on the island they sailed for Timor in four open boats, arriving in Kupang on 16 September 1791 after an arduous voyage across the Arafura Sea. Sixteen more died after surviving the wreck, many having fallen ill during their sojourn in Batavia (Jakarta). Eventually only 78 of the 134 men who had been on board upon departure returned home.

Captain Edwards and his officers were exonerated for the loss of the Pandora after a court martial. No attempt was made by the colonial authorities in New South Wales to salvage material from the wreck. The ten surviving prisoners were also tried; the various courts martial held found four of them innocent of mutiny and, although the other six were found guilty, only three (Millward, Burkitt and Ellison) were executed. Peter Heywood and James Morrison received a Royal pardon, while William Muspratt was acquitted on a legal technicality.

Descendants of the nine mutineers not discovered by Pandora still live on Pitcairn Island, the refuge Fletcher Christian founded in January 1790 and where they burnt and scuttled the Bounty a few weeks after arrival. Their hiding place was not discovered until 1808 when the New England sealer Topaz (Captain Mayhew Folger) happened on the tiny uncharted island. By then, all of the mutineers – except John Adams (aka Alexander Smith) – were dead, most having died under violent circumstances.

The location of the wreck of the Pandora was first pin-pointed in November 1977 by a RAAF P-2V Neptune which dropped a flare where it had detected the magnetic anomaly caused by the wreck, using its built in sensors. The wreck was subsequently sighted by a diver called Ron Bell, working with documentary filmmaker Ben Cropp. On that day under the radio guidance of Ben Cropp, searchers on the ground were initially unsuccessful in pinpointing the wreck at an expected location. Also on that day a second documentary filmmaker team, led by Steve Domm, joined the search. After the wreck site was located on the following day, it was immediately declared a protected site under the Australian Historic Shipwrecks Act 1976, Messrs.Cropp and Domm sharing the maximum reward payable under that legislation. It is located approximately 5 km north-west of Moulter Cay Lua error in Module:Coordinates at line 668: callParserFunction: function "#coordinates" was not found. on the outer Great Barrier Reef, approximately 140 km east of Cape York, on the edge of the Coral Sea.

The Queensland Museum has been excavating the wreck according to a research design. Archaeologists and historians at the Museum of Tropical Queensland are still gradually fitting together pieces of the Pandora story puzzle, using the archaeological evidence as well as the extant historical evidence. A large collection of artefacts is on display at the museum.

In the course of nine seasons of excavation during the 1980s and 1990s, the museum's marine archaeological teams established that approximately 30% of the hull is preserved as a more or less intact structure (Gesner,2000:39ff) The vessel came to rest at a depth of between 30 and 33 m on a gently sloping sandy bottom, slightly inclined to starboard; consequently more of the starboard side has been preserved than the port side of the hull. Approximately one third of the overburden in which the wreck is buried has been excavated by the Queensland Museum to date; it is estimated that the remainder to be excavated amounts to approximately 350 m³. This would probably require at least another ten full-blown seasons of excavation – assuming a similar methodology and level of technology is used as on previous museum expeditions. If an expedition were to be mounted from the 2008–09 summer – and subsequently at a rate of one excavation per summer (until 2017–18) – it is estimated that at least A$9.5 million would be required to complete ten seasons of fieldwork. Additional funds (approximately between $450,000 and $550,000 p/a) would also be required to provide for salaries of at least four additional full-time, 'back-of-house' professional contract positions at the museum, until at least 2020.

For strategic and financial reasons, there are no plans to continue excavation in the foreseeable future. However, if the Queensland Museum were to continue excavation, priority would be given to the area under the stern and to the bow section of the wreck; especially to the various petty officers' storerooms that were erected in the bow at platform deck level in vessels of the Pandora's design. In addition to exposing professional and personal items belonging to the ordinary sailors and to such crew members as the carpenter and the boatswain, the forward storerooms are expected to contain a range of extra spare stores and fittings which the Pandora was carrying in anticipation of the need to refit the Bounty after her recapture.