From Infogalactic: the planetary knowledge core
Jump to: navigation, search
For other ships with the same name, see HMS Queen Elizabeth.

HMS Queen Elizabeth was the lead ship of her class of dreadnought battleships built for the Royal Navy in the early 1910s. Often used as a flagship, she participated in the Battle of Jutland during the First World War as part of the Grand Fleet. Other than that battle, and the inconclusive Action of 19 August, her service during the war generally consisted of routine patrols and training in the North Sea. She and the other super-dreadnought battleships were the first of their type to be powered by oil instead of coal.

The Queen Elizabeth-class ships were designed to form a fast squadron for the fleet that was intended to operate against the leading ships of the opposing battleline. This required maximum offensive power and a speed several knots faster than any other battleship to allow them to defeat any type of ship.[1][2]

The Queen Elizabeth class was equipped with eight breech-loading (BL) 15-inch (381 mm) Mk I guns in four twin gun turrets, in two superfiring pairs fore and aft of the superstructure, designated 'A', 'B', 'X', and 'Y' from front to rear. Queen Elizabeth was the only ship of her class that mounted all sixteen of the designed BL 6-inch (152 mm) Mk XII guns in casemates. Twelve of these were mounted along the broadside of the vessel amidships and the remaining four were grouped in the stern abreast 'X' and 'Y' turrets. These latter guns were quickly found to be too close to the water and were frequently flooded at high speed or heavy seas. Two were removed and the other pair were shifted to positions on the forecastle deck near the aft funnel, protected by gun shields, in May 1915. The ships' anti-aircraft (AA) armament consisted of two quick-firing (QF) 3-inch (76 mm) 20 cwt Mk I[Note 1] guns. They were fitted with four submerged 21-inch (533 mm) torpedo tubes, two on each broadside.[4]

Queen Elizabeth was completed with two fire-control directors fitted with 15-foot (4.6 m) rangefinders. One was mounted above the conning tower, protected by an armoured hood, and the other was in the spotting top above the tripod foremast. Each turret was also fitted with a 15-foot rangefinder. The main armament could be controlled by 'B' turret as well. The secondary armament was primarily controlled by directors mounted on each side of the compass platform on the foremast once they were fitted in March 1917, although one temporary director was fitted in November–December 1916.[5]

The waterline belt of the Queen Elizabeth class consisted of Krupp cemented armour (KC) that was 13 inches (330 mm) thick over the ships' vitals. The gun turrets were protected by 11 to 13 inches (279 to 330 mm) of KC armour and were supported by barbettes 7–10 inches (178–254 mm) thick. The ships had multiple armoured decks that ranged from 1 to 3 inches (25 to 76 mm) in thickness. The main conning tower was protected by 13 inches of armour. After the Battle of Jutland, 1 inch of high-tensile steel was added to the main deck over the magazines and additional anti-flash equipment was added in the magazines.[6]

Queen Elizabeth at the Dardanelles 1915

Queen Elizabeth, named in honour of Elizabeth I of England, was launched on 16 October 1913 at Portsmouth, Hampshire, and entered service in January 1915 during World War I. While still undergoing testing in the Mediterranean, the ship was sent to the Dardanelles for the Allied attempt to knock the Ottoman Empire out of the war. She was the only dreadnought battleship to participate, though a number of battlecruisers and pre-dreadnought battleships were also involved. She became the flagship for the preliminary naval operations in the Dardanelles Campaign, leading the first line of British battleships in the battle of 18 March 1915. During the attempted military invasion of the Gallipoli on 25 April, Queen Elizabeth was the flagship for General Sir Ian Hamilton, commander of the Mediterranean Expeditionary Force. However, after the sinking of HMS Goliath by a Turkish destroyer on 12 May, Queen Elizabeth was immediately withdrawn to a safer position.

She joined Admiral Hugh Evan-Thomas's 5th Battle Squadron (consisting of Queen Elizabeth-class battleships) of the Grand Fleet based at Scapa Flow, but she missed the Battle of Jutland due to being in dock for maintenance.

She was rebuilt twice between the world wars; in 1926–1927 bulges were added, the funnels were trunked, four 4 inch guns were added, and a new foretop was installed. In her 1937–1941 rebuild she was fitted with a tower bridge in place of her old bridge; her 6 inch (152 mm) guns were removed and replaced by 20 (10 × 2) 4.5 in (114 mm) guns and several smaller anti-aircraft guns; horizontal armour was added; engines and boilers were replaced; and the elevation of her main battery was increased to 30 degrees. Deck armour was increased to 5 inches over the magazines, 2.5 inches over the machinery, while the new 4.5" guns had between 1 and 2 inches of armour.[8] She also received facilities for aircraft with a launching catapult amidships.[7] New fire control equipment was installed, including the HACS MkIV AA fire control system and the Admiralty Fire Control Table Mk VII for surface fire control of the main armament. This reconstruction was completed in January 1941, when Britain had been at war for over a year. 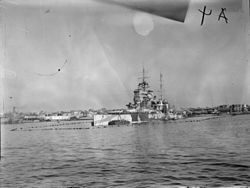 When her reconstruction was complete, Queen Elizabeth rejoined the Mediterranean Fleet, covering the evacuation of Crete in June 1941.[7] She, along with HMS Valiant, was mined and seriously damaged by Italian frogmen (Antonio Marceglia and Spartaco Schergat), in an attack on 19 December 1941 in shallow water in the harbour at Alexandria, Egypt, with the loss of nine men of her complement.

Although badly damaged, with her draught increased to 41.8 feet (12.5m), Queen Elizabeth was not grounded on the harbour bottom,[9][10] her decks were clear and the Italian crews were captured. For this reason, the British maintained the illusion of full operational status, to conceal the weak British position in the Mediterranean during the period the two ships were patched and refloated. However, this concealing action lasted through a few days only, whereas the Valiant went back into service after many months and the Queen Elizabeth after more than a year and half. Following completion of temporary repairs in an Alexandria drydock in June 1942, she steamed through the Suez Canal and around Africa to the Navy Yard in Norfolk, Virginia in the United States. From September of that year until June 1943, she was comprehensively repaired.

Queen Elizabeth went to the Home Fleet in July 1943, and in December she left for the Eastern Fleet, which she joined in January 1945. She took part in raids on Japanese bases in the Dutch East Indies, and was placed in reserve in August 1945.

A model of HMS Queen Elizabeth by renowned marine model maker Norman A. Ough is held by the National Maritime Museum.[11]