HM Prison Holloway is a closed category prison for adult women and young offenders in Holloway, London, England, operated by Her Majesty's Prison Service. It is the largest women's prison in western Europe.[1] It was announced on in 2015 that HMP Holloway will close due to its age and the fact it is unsuited to the needs of a modern prison.[2]

In 2016, after the suspicious death of inmate Sarah Reed, her family claimed that the prison has forbidden them to examine the body.[3]

Holloway prison was opened in 1852 as a mixed-sex prison, but due to growing demand for space for female prisoners, particularly due to the closure of Newgate, it became female-only in 1903.

Holloway Prison was completely rebuilt between 1971 and 1985 on the same site. The redevelopment resulted in the loss of the "grand turreted" gateway to the prison, which had been built in 1851; architectural critic Gavin Stamp was later to regret the loss and to note that the climate of opinion at the time was such that The Victorian Society felt unable to object.[4] 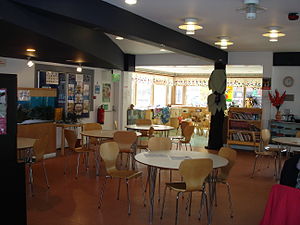 Holloway Prison holds female adults and young offenders remanded or sentenced by the local courts. Accommodation at the prison mostly comprises single cells, however, there is some dormitory accommodation.

There is a family-friendly visitors' centre, run by the Prison Advice and Care Trust (pact), an independent charity.

It was announced in the Chancellor of the Exchequer George Osborne's Autumn statement on the 25th November 2015 that the prison would be closing and sold for housing.[5][6] At the time of closure Maggie Newton has been working at Holloway Prison for 42 years

For decades, British campaigners had argued for votes for women. It was only when a number of suffragists, despairing of change through peaceful means, decided to turn to militant protest that the "suffragette" was born. These women broke the law in pursuit of their aims, and many were imprisoned at Holloway, where they were treated as common criminals, not political prisoners. In protest, some went on hunger strike and were force fed, so Holloway has a large symbolic role in the history of women's rights in the UK. Suffragettes imprisoned there include Anne Miller Fraser, Constance Markeivicz, Charlotte Despard, Mary Richardson, Dora Montefiore, Hanna Sheehy-Skeffington, and Ethel Smyth. In 1912 the anthem of the suffragettes - "The March of the Women", composed by Ethel Smyth with lyrics by Cicely Hamilton - was performed there.[7]

Holloway held Diana Mitford under Defence Regulation 18B during World War II, and after a personal intervention from Prime Minister Winston Churchill, her husband Sir Oswald Mosley was moved there. The couple lived together in a cottage in the prison grounds. They were released in 1943.

Norah Elam had the distinction of being detained during both World Wars, three times during 1914 as a suffragette prisoner under the name Dacre Fox, then as a detainee under Regulation 18B in 1940, when she was part of the social circle that gathered around the Mosleys during their early internment period. Later, after her release, Elam had the further distinction of being the only former member of the British Union of Fascists to be granted a visit with Oswald Mosley during his period of detention there.[8]

A total of five judicial executions by hanging took place at Holloway Prison between 1903 and 1955:

The bodies of all executed prisoners were buried in unmarked graves within the walls of the prison, as was customary. In 1971 the prison underwent an extensive programme of rebuilding, during which the remains of all the executed women were exhumed. With the exception of Ruth Ellis, the remains of the four other women were subsequently reburied in a single grave at Brookwood Cemetery near Woking, Surrey.

More recently it housed, in 1966, Moors murderess Myra Hindley; in 1967, Kim Newell, a Welsh woman who was involved in the Red Mini Murder; also in the late 1960s, National Socialist supporter Françoise Dior, charged with arson against synagogues; in 1993, Sheila Bowler, the music teacher wrongly imprisoned for the murder of her elderly aunt, was detained there before being transferred to Bullwood Hall;[10] and in 2002, Maxine Carr, who gave a false alibi for Soham murderer Ian Huntley. Other inmates include Amie Bartholomew, Emma Last, Rochelle Etherington, Ginny Crutcher, Alison Walder, Jayne Richards, the Tinsel Fight Murderer, Bella Coll and Chantal McCorkle.

In October 1999, it was announced that healthcare campaigner and agony aunt Claire Rayner had been called in to advise on an improved healthcare provision at Holloway Prison. Rayner's appointment was announced after the introduction of emergency measures at the prison's healthcare unit after various failures.[11]

In September 2001, an inspection report from Her Majesty's Chief Inspector of Prisons claimed that Holloway Prison was failing many of its inmates, mainly due to financial pressures. However, the report stated that the prison had improved in a number of areas, and praised staff working at the jail.[12]

In March 2002, Managers at Holloway were transferred to other prisons following an inquiry by the Prison Service. The inquiry followed a number of allegations from prison staff concerning sexual harassment, bullying and intimidation from managers. The inquiry supported some of these claims.[13]

An inspection report from in June 2003, stated that conditions had improved at Holloway Prison. However the report criticised levels of hygiene at the jail, as well as the lack of trained staff, and poor safety for inmates.[14] A further inspection report in September 2008 again criticised safety levels for inmates of Holloway, claiming that bullying and theft were rife at the prison. The report also noted high levels of self-harm and poor mental health among the inmates.[15]

A further inspection in 2010 again noted improvements but found that most prisoners said they felt unsafe and that there remained 35 incidents a week of self-harm.[16] The prison's operational capacity is 501.[17]

At 8am on 11 January 2016, Sara Reed, an inmate at Holloway, was found dead in her cell. Prison staff claimed she had strangled herself in her sleep, while the Reed family call for justice.