HM Prison Pentonville (informally "The Ville") is a Category B/C men's prison, operated by Her Majesty's Prison Service. Pentonville Prison is not actually within Pentonville itself, but is located further north, on the Caledonian Road in the Barnsbury area of the London Borough of Islington, north London, England.

The first modern prison in London, Millbank, opened in 1816. It had separate cells for 860 prisoners and proved satisfactory to the authorities who started building prisons to deal with the rapid increase in numbers occasioned by the ending of capital punishment for many crimes and a steady reduction in transportation.

Two Acts of Parliament allowed for the building of Pentonville prison, designed by Captain Joshua Jebb, Royal Engineers, for the detention of convicts sentenced to imprisonment or awaiting transportation. Construction started on 10 April 1840 and was completed in 1842. The cost was £84,186 12s 2d. 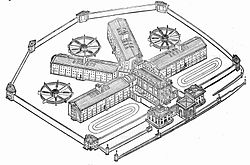 An isometric drawing of Pentonville prison, from an 1844 report by Joshua Jebb, Royal Engineers.[1]

It had a central hall with five radiating wings, all visible to staff at the centre. This design, intended to keep prisoners isolated – the "separate system" first used at Eastern State Penitentiary in Philadelphia – was not, as is often thought, a panopticon. Guards had no view into individual cells from their central position. Pentonville was designed to hold 520 prisoners under the separate system, each having his own cell, 13 feet (4 m) long, 7 feet (2 m) wide and 9 feet (3 m) high with little windows on the outside walls and opening on to narrow landings in the galleries.[2]

They were "admirably ventilated", a visitor wrote, and had a water closet, though these were replaced by communal, evil-smelling recesses because they were constantly blocked and the pipes were used for communication.[2] The cost of keeping a prisoner at Pentonville was about 15 shillings a week in the 1840s.

Prisoners were forbidden to speak to each other and when out on exercise would tramp in silent rows, wearing brown cloth masks. In chapel, which they had to attend every day, they sat in cubicles, their heads visible to the warder but hidden from each other.[3]

Prison labour at Pentonville in the 1870s.

Mental disturbances were common. An official report admitted that "for every sixty thousand persons imprisoned in Pentonville there were 220 cases of insanity, 210 cases of delusion, and forty suicides".[3] However conditions were better and healthier than at Newgate and similar older prisons, and each prisoner was made to do work such as picking oakum (tarred rope) and weaving. The work lasted from six in the morning until seven at night.[3] The food ration was a breakfast of 10 ounces of bread and three-quarters of a pint of cocoa; dinner was half a pint of soup (or four ounces of meat), five ounces of bread, and one pound of potatoes; supper a pint of gruel and five ounces of bread.[3]

Pentonville became the model for British prisons; a further 54 were built to similar designs over six years and hundreds throughout the British Empire. For instance, Pentonville was used as a model for the eventual construction of Corradino Prison in Rahal Gdid, Malta by W. Lamb Arrowsmith in 1842.[4]

Prisoners under sentence of death were not housed at Pentonville Prison until the closure of Newgate in 1902, when Pentonville took over executions in north London. Condemned cells were added and an execution room built to house Newgate's gallows. At the same time Pentonville took over from Newgate the function of being the training location for future executioners.

Irish revolutionary Roger Casement was hanged there on 3 August 1916 and his remains interred at the site until 1965. Udham Singh, the Indian revolutionary, who shot Sir Michael O'Dwyer (Governor of the Punjab during the Amritsar Massacre), was also held in custody and hanged at Pentonville (1940).

Various other people were executed at Pentonville and all were subsequently buried at the rear of the prison in unmarked graves. These include Hawley Crippen, whose family in Coldwater, Michigan has been lobbying since 2009 for his body to be repatriated and buried in the family plot after claims arising from mitochondrial DNA analysis that he did not murder his wife. The prison cemetery is at Lua error in Module:Coordinates at line 668: callParserFunction: function "#coordinates" was not found..

The final execution at Pentonville took place on 6 July 1961 when Edwin Bush, aged 21, was hanged.[5] 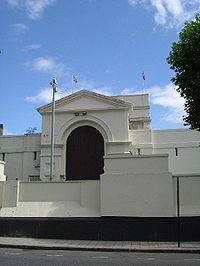 In May 2003, an inspection report from Her Majesty's Chief Inspector of Prisons blamed overcrowding for poor standards at HMP Pentonville. The inspection found that basic requirements for inmates such as telephones, showers and clean clothes were not being provided regularly enough. The report also noted a lack of access to education for inmates and inadequate specialised procedures for vulnerable prisoners. The inspection report also praised a number of areas of the prison including the healthcare department, the prison drugs strategy and programmes for reducing offending behaviour.[11]

A new hospital wing, built at a cost of £15 million, was opened at Pentonville Prison in early 2005. Months later inspectors reported that despite the new facilities, primary care for prisoners such as clinical supervision of nurses and drug dispensing practices were inadequate.[12] A year later, 14 prison officers at Pentonville were suspended after allegations of trafficking and "inappropriate relations" with inmates.[13]

In August 2007, a report from the Pentonville's Independent Monitoring Board stated that the prison was infested with rats and cockroaches and had insufficient levels of staff. The report also criticised the detention conditions for mentally ill inmates, the reception facilities for new prisoners and the library provision at the jail.[14]

In October 2009, gross misconduct charges were brought against managers of Pentonville Prison after an investigation found that inmates had been temporarily transferred to HMP Wandsworth before inspections. The transfers, which included vulnerable prisoners, were in order to manipulate prison population figures.[15]

In February 2014, a report by Her Majesty's Chief Inspector of Prisons Nick Hardwick said there are "huge challenges" at Pentonville and that it will not have a "viable future" without a major refurbishment and extra staff.[16]

A further report released in June 2015[17] indicated that Pentonville had "deteriorated even further" since the previous inspection. The report highlighted that many inmates were left without basic provisions, including pillows and utensils, that there were "mounds of rubbish" on the floors and cockroach infestations. Frances Cook, chief executive for the Howard League for Penal Reform, commented "when a prison is asked to hold 350 more prisoners than it is designed for, we should not be surprised when it fails".[18]

Pentonville is a local prison, holding Category B/C adult males remanded by local magistrates' and crown court, and those serving short sentences or beginning longer sentences. The prison is divided into these main wings: