HM Prison Wormwood Scrubs (informally "The Scrubs") is a Category B men's prison, located in the Wormwood Scrubs area of the London Borough of Hammersmith and Fulham, in inner west London, England. The prison is operated by Her Majesty's Prison Service.

The initial steps in the winter of 1874 involved the construction of a small prison made of corrugated iron and a temporary shed to serve as a barracks for the warders. Nine specially picked prisoners, all within a year of release, completed the buildings after which 50 more prisoners were brought in who in turn erected a second temporary prison wing. Building then began on the permanent prison, with bricks being manufactured on site. By the summer of 1875 enough bricks had been prepared to build the prison's first block, whose ground floor was finished as winter began. Construction was completed in 1891.[1]

During World War II the prison was taken over by the War Department and the prisoners evacuated. It was used as secure office space for the duration of hostilities and housed MI5 and MI8.

In 1979, IRA prisoners staged a rooftop protest over visiting rights. 60 inmates and several prison officers were injured. In 1982, an inquiry blamed much of the difficulties on failings in prison management. The governor, John McCarthy, had quit before the rioting. He had described Wormwood Scrubs as a "penal dustbin" in a letter to The Times. 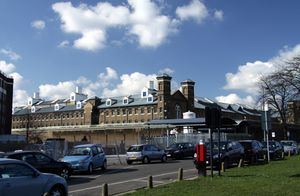 General view to the prison from park

In the 1990s, a police investigation into allegations of staff brutality resulted in the suspension of 27 prison officers and the conviction of six for assault (three later won appeals against conviction). The Prison Service paid over £3 million in out-of-court settlements with ex-prisoners who had alleged brutality. Her Majesty's Chief Inspector of Prisons delivered a damning report on the conditions and regime in which the prison was told to improve or close.

In March 2004, a further report from the Chief inspector stated that Wormwood Scrubs had greatly improved after making fundamental changes. Three quarters of inmates at the prison had said that staff treated them with respect, which was better than the national average. However the report also stated that inmates spent too much time in their cells, and only 36% of eligible inmates were involved in education or prison work.[2]

In November 2008, another report from Her Majesty's Chief Inspector stated that conditions at Wormwood Scrubs Prison had deteriorated since the last inspection. Heightened prison gang activity had been detected, and 20% of prisoners had failed drugs tests.[3]

On 10 March 2009 the prison was listed as a Grade II building, principally because of its distinctive gatehouse.[4]

Major structural changes to the prison's management took place in 2013. A 2014 report by Her Majesty's Inspectorate of Prisons was critical of the prison, describing it as "filthy". The inspectors stated that there had been a failure to put into place recommendations by the Prisons and Probation Ombudsman to deal with suicide and self-harm. The chief executive of the Howard League for Penal Reform, a charitable body, said "I have never seen a public service deteriorate so rapidly and so profoundly."[5] 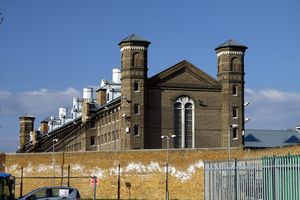 Building inside the prison area

Wormwood Scrubs is a Category B prison for adult males, sentenced or on remand from the local courts. The prison has five main wings plus a number of smaller dedicated units. All the accommodation has electricity and integral sanitation with a TV and accompanying bedroom furniture:

There is a contracted prison shop previously run by Aramark, but now run by DHL who provide a selection of consumables for purchase by the prisoners.

The two oval plaster reliefs on the front of the prison depict Elizabeth Fry and John Howard both well known figures of Prison reform. 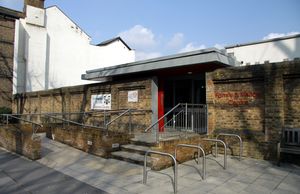 Visitor centre of the prison

In films and TV programmes set in Britain, when someone is shown being released from prison, the front entrance of Wormwood Scrubs is frequently chosen as a filming location, e.g.

A documentary entitled Wormwood Scrubs was aired on ITV1 in May 2010. It showed the life of the prisoners and staff over a two part series.