From Infogalactic: the planetary knowledge core
Jump to: navigation, search
"HSBC Bank plc" redirects here. It is not to be confused with HSBC Bank.

HSBC Bank plc is one of the largest banking and financial services organisations in the world. HSBC's international network comprises around 7,500 offices in over 80 countries and territories in Europe, the Asia-Pacific region, the Americas, the Middle East and Africa.

HSBC Bank plc is one of the four major clearing banks in the United Kingdom and is a wholly owned subsidiary of HSBC Holdings. The business ranges from the traditional High Street roles of personal finance and commercial banking, to private banking, consumer finance as well as corporate and investment banking. Across all brands the bank operates some 1800 sites in the UK.

The UK headquarters of HSBC are at HSBC Tower, 8 Canada Square in the Canary Wharf area of east London. This building is also home to HSBC Group's headquarters, and houses some 8,000 staff over 42 floors.

HSBC Bank Plc is the only one of Britain's big five banks to hold more deposits than loans (loan:deposit ratio of 90%).[1] This has led to the bank being seen as a less risky proposition than the other banks by investors and customers, as it is able to fully fund its own operations. It has also contributed to the company's share price maintaining value throughout the credit crunch, unlike other banks in the market.

The Hongkong and Shanghai Banking Corporation acquired a 14.9 per cent equity interest in Midland Bank in 1987, and a strong working relationship developed. In 1992, HSBC Holdings plc acquired full ownership of Midland Bank. It was one of the largest acquisitions in banking history, giving HSBC the major foothold in Europe that it needed to complement its existing business in Asia and the Americas. Midland Bank was renamed HSBC Bank in 1999 as part of the adoption of the HSBC brand throughout the Group. 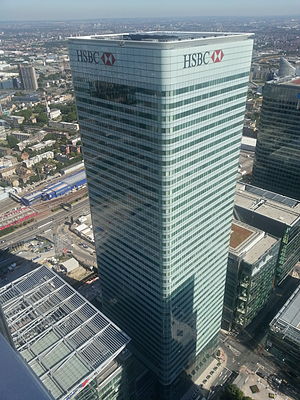 Under the HSBC brand the bank maintains a network of around 1,100 branches throughout England and Wales,[2] with a much smaller presence in Scotland and Northern Ireland where local banks tend to dominate. Branches are undergoing a rolling program of refurbishment to improve the 'retail experience' as the bank puts it, including the rebranding of branches as 'stores' and the inclusion of more open areas for staff to meet customers, as well as HSBC Live, a radio station specifically produced for the bank by media company Immedia in Newbury, Berkshire.

In April 2008 HSBC launched a campaign selling mortgages. This was seen as a risky move by media and HSBC staff due to their previous non-plus attitude building on their 3% market share of the mortgage market. While other banks and building societies felt the effects of the 'credit crunch', HSBC, bolstered by a favourable savings to lending ratio, unveiled a mortgage rate matching deal that would offer non-HSBC mortgage customers the ability to match their current mortgage rate.

The bank is due to move its headquarters from London to Birmingham in 2017.[3]

In September 2015, the group announced it would rebrand its UK branch network as "HSBC UK" from 1 January 2018, as part of an effort to separate its retail banking operations from its investment banking. Such a split has been stipulated for all banks by the UK's banking regulators. It was previously speculated that HSBC might revive the Midland Bank name or use the First Direct brand for its branch network.[4]

HSBC operated a number of outlets in supermarkets owned by the Morrisons supermarket chain, they traded as Your bank at Morrisons and offered a range of financial services, including an exclusive credit card and savings account. The agreement with Morrisons to provide this service expired in 2009 and all Your Bank outlets ceased trading before the end of 2009. 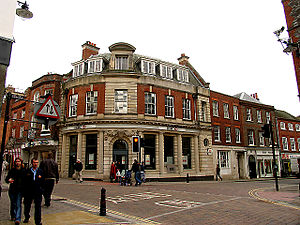 A branch of HSBC in Newbury

In 1989 the Midland Bank launched First Direct, the pioneer of telephone banking, with a person-to-person service available 24 hours a day, 365 days a year. It now offers internet banking as well and serves more than one million customers. Over its first 15 years, first direct established a position as the United Kingdom's most recommended bank.[5]

Household International established HFC Bank as consumer finance business in the UK in 1973, it became one of the largest consumer finance companies in the UK before Household was acquired by HSBC in 2003. HFC Bank provides retail credit to many leading national retailers and is the largest point of sale loan provider in the UK. The business focuses on retail finance through branches and direct channels, and co-branded and loyalty credit cards. Some of the key brands are the recently relaunched Beneficial Finance (with around 160 branches) and marbles. HFC Bank has around 3.5 million customers.

As a result of the Household acquisition, the UK group gained expertise allowing it to enter joint ventures and contracts with more high street names, such as taking over Marks and Spencer Bank (M&S Bank) on a partnership basis in 2004 and the John Lewis Partnership Card contract.

Through various acquisition deals, including some inside the HSBC Group for reorganisational purposes, HSBC Bank plc has become the regional headquarters for Europe. This means the lines of authority from across Europe for such entities as HSBC France, HSBC Trinkaus, HSBC Bank Malta plc, HSBC Turkey, HSBC Bank International and HSBC Private Bank in Europe lead to HSBC Bank plc.

HSBC opened in 2007. Has three bank branches in Algiers.

The bank was established as a closed joint stock company under the name Midland Armenia Bank J.S.C. on 1996 and has been renamed into HSBC Bank Armenia cjsc on 1999. The bank is a joint venture between the HSBC Group, which has a 70% ownership, and members of overseas Armenian businesses with 30% ownership. It is one of the leading banks in the foreign exchange market. HSBC Bank Armenia cjsc offers a wide range of products and services to individual as well as corporate customers in Armenia and abroad. The bank is the member of SWIFT and Bankmail payment systems.

HSBC Bank plc is undertaking a significant expansion in Eastern and Central Europe, with the Czech Republic the first country to offer Personal Financial Services. The operations are focused on HSBC Premier.

HSBC France has operated around 800 branches in France since the takeover of Credit Commercial de France, primarily operating under the HSBC brand. HSBC France is now the HSBC Group’s lead bank in the Eurozone, focusing on certain capital market products for a global audience, and high-net-worth and international business in France.

HSBC Bank Georgia opened its doors for business in Tbilisi in June 2008. HSBC Bank Georgia jsc is a locally licensed joint venture between the HSBC Group, which has 70% ownership, and members of overseas businesses who hold 30%.

HSBC Trinkaus & Burkhardt AG was founded in 1785 and is one of the longest-established members of the HSBC Group. It has operations in private, commercial and investment banking and asset management.

HSBC Bank plc and a number of subsidiaries have operations in insurance, reinsurance, securities services and a newly established consumer finance business. The fund management business had assets in excess of US$20bn as of 2006[update].[6]

HSBC Bank A.S. is now the fifth largest private bank in Turkey, having expanded through internal financing and via acquisition since entering the market in 1990. The bank has a network of around 336 branches, offering products and services to corporate, commercial and personal customers, both under the HSBC brand as well as the Advantage brand.

In July 2007, HSBC suddenly withdrew its interest-free overdrafts for graduates. Students graduating that year discovered that they were to face unexpected bills of up to £140 a year.[7] Students mobilised protests using the social networking website Facebook and in August HSBC reversed their policy,[8] freezing overdraft charges to recent graduates and pledging to repay charges deducted in August while holding talks with the National Union of Students.

In April 2008 HSBC confirmed the loss of unencrypted data disks containing life insurance policy details for 370,000 customers.[9] In February 2011 HSBC sent a letter dated February 11 to an unknown number of recipients, stating that they were "writing to inform you of the potential compromise of some of your former account information with us." The date and extent of the loss were not given; however, HSBC offered a year's enrollment to ITAC Sentinel and advised vigilance for 12 to 24 months, as well as recommending contacting the three major Credit Bureaus to place a Fraud Alert on the credit profile.

In 2008 HSBC were accused of 'cultural insensitivity' in an advertising campaign featuring an overweight white man dressed to look like a Sumo wrestler. The campaign upset members of Britain's Japanese community who claimed the man's skin tone was darkened and makeup was applied to narrow his eyes.[10] HSBC denied making the model appear to be from a specific country or region but admitted makeup was applied and skin tone was tanned.[11]

Links to the arms trade

In December 2008 the British anti-poverty charity War on Want released a report documenting the extent to which HSBC and other UK commercial banks invest in, provide banking services for and make loans to arms companies. The charity writes in its report that HSBC holds shares in the global arms industry totalling £450.6 million, and serves as principal banker for Meggitt, one of the UK's largest arms companies. The report also details HSBC's dealings with known producers of cluster munitions and depleted uranium.[12]