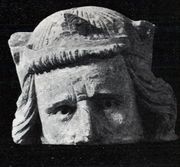 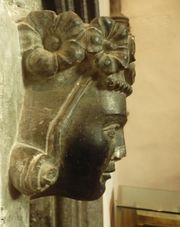 A sculpture believed to be of King Haakon V Magnusson as Duke of Oslo, Oppland, Ryfylke, the Faroe Islands, and Shetland.[3]

Haakon was the younger surviving son of Magnus the Lawmender, King of Norway, and his wife Ingeborg of Denmark. Through his mother, he was a descendant of Eric IV, king of Denmark. In 1273, his elder brother, Eirik, was named junior king under the reign of their father, King Magnus. At the same time, Haakon was given the title "Duke of Norway", and from his father's death in 1280, ruled a large area around Oslo in Eastern Norway and Stavanger in the southwest, subordinate to King Eirik.[4] Haakon succeeded to the royal throne when his older brother died without sons.

Haakon was married to Eufemia of Rügen, the daughter of Günther, Count of Arnstein. In 1312, his only legitimate daughter, Ingeborg Håkonsdotter married duke Eric Magnusson of Sweden, a younger brother of King Birger of Sweden. Their son, Magnus Eriksson would succeed Haakon V as king of Norway.[5] He also had an illegitimate daughter named Agnes Hákonardottir.[6]

During Haakon's reign, Oslo gradually took over the functions of capital of Norway from Bergen, though there was no official pronouncement of this at any time. Haakon is also associated with the construction of Akershus Fortress (Akershus Festning) and Bohus Fortress (Båhus festning). During his reign he revived his brother's war policy against Denmark, but in 1309 he finally concluded a peace that in general was the end of a period of Dano-Norwegian wars. In domestic matters he energetically and successfully tried to limit the power of the magnates and to strengthen the king's power.

In 1319, Haakon was succeeded by his daughter's son, prince Magnus who was an infant. Haakon's daughter Ingeborg was recognized as formal regent of her son. Havtore Jonsson was put in the guardianship government until he himself died the following year.

Haakon was buried in St. Mary's church (Mariakirken) in Oslo. Remains of two people, deemed to be Haakon and Eufemia, were discovered during excavations of the ruins of that church and reinterred in the royal mausoleum at Akershus Castle.[7]