Habsburg is a municipality in the district of Brugg in canton of Aargau in Switzerland. It lies about three kilometres southwest of the town of Brugg, the capital of the district of Brugg. Habsburg is named after Habsburg Castle, built around 1020-1030 for Count Radbot of the nearby county of Klettgau in the Duchy of Swabia, which Habsburg was also a part of at the time. 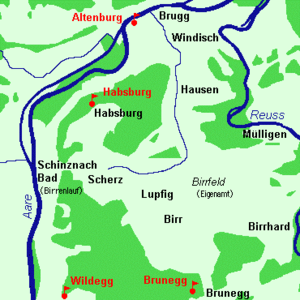 The Habsburg lands from the 11th to 13th Centuries

While Bronze Age and Roman era artifacts have been discovered, a village named Habsburg isn't mentioned until 1027, as Habesbur or Habeburch. This reference comes from a later (1114) copy of the original 1027 document. In 1114 it was mentioned Hauesborc.[3]

The documentation of the village in 1027 is contemporary with Count Radbot's construction of Habsburg Castle. It is believed that he named the castle after a hawk (German: Habicht) seen sitting on its walls. Some historians and linguists believe the name may come from the Middle High German word 'hab / hap' meaning ford, as it is located near a ford of the Aar River. Habsburg Castle became the originating family seat of the House of Habsburg, which went on to become one of the leading royal dynasties in Europe.

Habsburg Castle remained the property of the House of Habsburg until 1415, when Duke Frederick IV of the Empty Pockets lost the canton of Aargau to the Swiss Confederacy.

The area around the Habsburg Castle and the modern municipality, was covered by forests that were only cleared around 1500, nearly half a millennium after Habsburg Castle was first constructed.

Religiously, it was always part of the parish of Windisch. The community grew slowly. In 1529 there were only four houses in the village, and the school was first built in 1747. The economy was almost exclusively agriculture (including a little viticulture) until 1800 when a small plaster industry came to the village. In 1818, the schoolhouse was built, while in 1896 a fire house and pond were added. The municipal water supply was built in 1908 and in 1916 the village was connected to the electric grid. By 1960 the population decreased due to lack of earning potential and from the remote location. But it grew again after 1971 when several new houses were built. Since 1984, there has been a Postauto bus to Habsburg. 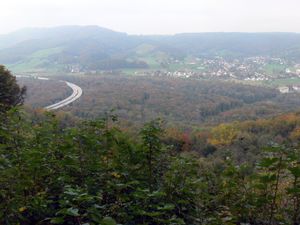 Of the built up area, housing and buildings made up 5.8% and transportation infrastructure made up 2.7%. 61.0% of the total land area is heavily forested. Of the agricultural land, 25.6% is used for growing crops and 3.6% is pastures.[4]

The municipality is located in the Brugg district. It consists of the haufendorf village (an irregular, unplanned and quite closely packed village, built around a central square) of Habsburg below Habsburg Castle. It is located above the Aar valley, directly east of the Wüpelsbergs, on which the castle is located.

As of 2000[update] the average number of residents per living room was 0.54 which is about equal to the cantonal average of 0.57 per room. In this case, a room is defined as space of a housing unit of at least 4 m2 (43 sq ft) as normal bedrooms, dining rooms, living rooms, kitchens and habitable cellars and attics.[9]

The entire Swiss population is generally well educated. In Habsburg about 88.1% of the population (between age 25-64) have completed either non-mandatory upper secondary education or additional higher education (either university or a Fachhochschule).[7] Of the school age population (in the 2008/2009 school year[update]), there are 20 students attending primary school in the municipality.[11]

The historical population is given in the following table:[3][8] 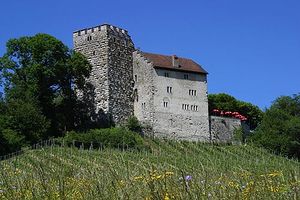 Habsburg Castle is listed as a Swiss heritage site of national significance.[13]

As of 2000[update] there was a total of 202 workers who lived in the municipality. Of these, 168 or about 83.2% of the residents worked outside Habsburg while 25 people commuted into the municipality for work. There were a total of 59 jobs (of at least 6 hours per week) in the municipality.[14] Of the working population, 12.1% used public transportation to get to work, and 56.5% used a private car.[7]