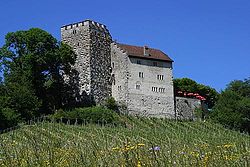 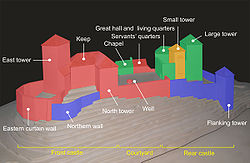 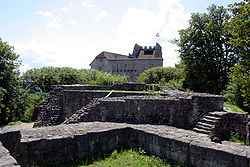 Ruins of former structures in foreground of existing buildings.

Habsburg Castle (German: Schloss Habsburg) is a medieval fortress located in Habsburg, Switzerland in the canton of Aargau, near the Aar River. At the time of its construction, the location was part of the Duchy of Swabia. Habsburg Castle is the originating seat of the House of Habsburg, which became one of the leading imperial and royal dynasties in Europe. It is listed as a Swiss heritage site of national significance.[1]

Around 1020–1030 Count Radbot, of the nearby county of Klettgau in the Duchy of Swabia, had the castle erected 35 km southwest of Klettgau, on the Aar, the largest tributary of the High Rhine. It is believed that he named the castle after a hawk (German: Habicht) seen sitting on its walls. Some historians and linguists believe the name may come from the Middle High German word 'hab / hap' meaning ford, as it is located near a ford of the Aar River.

Radbot's grandson, Otto II, was the first to take the Habsburg Castle name as his own, adding "von Habsburg" to his title and creating the House of Habsburg.

Habsburg Castle's importance diminished after Radbot's seventh generation descendant Rudolph moved the family's power base to Austria in 1276. Habsburg Castle remained property of the House of Habsburg until 1415, when Duke Frederick IV of the Empty Pockets lost the canton of Aargau to the Swiss Confederacy.

The original coat of arms to fly over Habsburg Castle, a red lion on a golden field, remained part of the Austrian arms up to the end of the Imperial period. The modern arms of the municipality of Habsburg, Switzerland, depict Habsburg Castle.

The area around the castle was covered by forests that were only cleared around 1500, nearly half a millennium after Habsburg Castle was first constructed.

Today the "large" and "small" towers of the original castle are preserved, attached to a residential building of the 13th century, while large parts of the complex lie in ruins. The extent of its eastern part is recognizable only by foundation walls. The palatial residence hosts a restaurant and a small exhibition.

Media related to Habsburg Castle at Wikimedia Commons Lua error in Module:Coordinates at line 668: callParserFunction: function "#coordinates" was not found.