Spain in the 17th century

From Infogalactic: the planetary knowledge core
(Redirected from Habsburg Spain in the seventeenth century)
Jump to: navigation, search

Habsburg Spain at the beginning of the 17th century stood at the end of its Golden Age, and although it retained its vast empire, Spain had experienced severe difficulties in the later 16th century, including military defeats in Europe like the Spanish Armada and a series of financial crises that had caused the Spanish Crown to declare bankruptcy four times in the late 1500s (1557, 1560, 1576, 1596). Many different factors, including the decentralized political nature of Spain, inefficient taxation, a succession of weak kings, power struggles in the Spanish court and a tendency to focus on the American colonies instead of Spain's domestic economy, all contributed to the decline of the Habsburg rule of Spain.

The end of the 17th century also brought the end of Habsburg rule. The 18th century began with the War of the Spanish Succession, which concluded in the establishment of the Bourbon dynasty in Spain.

Background: Spain from 1469 to the reign of Philip II of Spain

In 1469, Ferdinand II of Aragon and Isabella I of Castile united the Crowns of Aragon and Castile into one, creating the early modern Spanish state. Although this ensured future Spanish rulers would rule over both Aragon and Castile, both regions had their own administration and legal systems. In addition, Aragon itself was divided into Aragon proper, Valencia, and Catalonia - each with its own institutions, customs, and regional identity.[1] As Ferdinand and Isabella both outlived their only son to survive infancy, they were succeeded by their grandson, Charles I upon Ferdinand's death in 1516. Being Flemish born and not a native Spanish speaker, Charles never completely assimilated into Spanish society and as Holy Roman Emperor, had to rule over two empires at once. Determining it to be too difficult for one person to rule over all of his domains, Charles gave the Holy Roman Empire to his younger brother and the Spanish Empire to son, Philip II.

Although the Spanish Empire was at the height of its power under Philip II, a number of factors foreshadowed its eventual decline. There was a revolt in the Netherlands which started in 1568 and lasted the rest of Philip's reign. Also, the moriscos in Andalusia rebelled in 1570 against Philip's imposition of Spanish language and customs on them. Philip was at war with England during the last 10 years of his reign. These wars and other difficulties of maintaining the vast Spanish Empire led to four bankruptcies during Philip's reign. 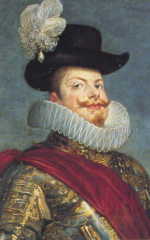 Signs that Habsburg Spain was declining were clearly visible during the reign of Philip III. Throughout Philip III's reign, the main currency was a copper-based coin called vellon, which was minted in response to the fall in imports of silver. Ironically, the copper needed to make vellon was purchased in Amsterdam with silver.[2] Imports of silver bullion from the Americans fell by half during Philip's reign. In 1599, a year after Philip took the throne, a bubonic plague killed about half a million people (1/10 of the Spanish population at the time). 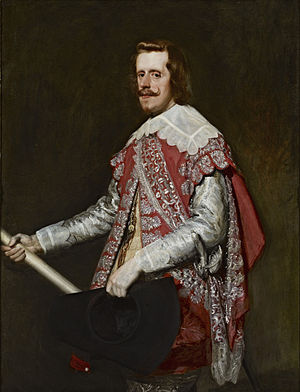 Philip IV was not competent enough to give the kind of clear direction that Spain needed. Responsibility passed to aristocratic advisers. Gaspar de Guzman, count-duke of Olivares, attempted and failed to establish the centralized administration that his famous contemporary, Cardinal Richelieu, had introduced in France. In reaction to Guzman's bureaucratic absolutism, Catalonia revolted and was virtually annexed by France. Portugal reasserted its independence in 1640, and an attempt was made to separate Andalusia from Spain. In 1648, at the Peace of Westphalia, Spain assented to the emperor's accommodation with the German Protestants, and in 1654 it recognized the independence of the northern Netherlands.

During the long regency for Charles II, the last of the Spanish Habsburgs, validos milked Spain's treasury, and Spain's government operated principally as a dispenser of patronage. Plague, famine, floods, drought, and renewed war with France wasted the country. The Peace of the Pyrenees (1659) had ended fifty years of warfare with France, whose king, Louis XIV, found the temptation to exploit weakened Spain too great. As part of the peace settlement, the Spanish infanta Maria Teresa, had become the wife of Louis XIV. Using Spain's failure to pay her dowry as a pretext, Louis instigated the War of Devolution (1667- 68) to acquire the Spanish Netherlands in lieu of the dowery. Most of the European powers were ultimately involved in the wars that Louis fought in the Netherlands.[3]

Spanish society during the 17th century

Spanish society in the 17th century Habsburg Spain was extremely inegalitarian. The nobility, being wealthier than ordinary people, also had the privilege of being exempt from taxes, which the lower classes did not have. Spanish society associated social status with leisure and thus work was undignified for nobles. Even wealthy merchants invested in land, titles and juros to avoid working for a living. Two ways of avoiding work were the church and education. In 1620, there were 100,000 Spaniards in the clergy, by the late 17th century there 150,000. Many Spaniards spent long years in universities, taking advantage of the increase in the number of universities. By 1660 there were about 200,000 Spaniards in the clergy and the Church owned 20% of all the land in Spain.

Spanish bureaucracy during the 17th century

The Spanish bureaucracy was a system of councils created during the reign of Philip II to help govern the vast Spanish Empire. One type advised him on the formulation of policy, another dealt with particular territories. A viceroy within each territory implemented the orders of the Council and reported back to them. In the New World colonies, judicial tribunals known as audiencias exercised both legal and political functions, limiting and checking up on the powers of the viceroy. This system was highly centralized, painfully slow, and totally reliant on the king for its efficient functioning. Philip II spent his whole life processing the paperwork; the idle Philip III and the self-indulgent Philip IV left control to their Councils of State. Under the mediocre Charles II, the councils became the sinecures of wealthy aristocrats despite various attempt at reform. The councils also relied on the viceroy and other local officials to implement and enforce central decisions. When offices were sold to local grandees, central control gave way to corruption and incompetence.

Economic situation in Spain during the 17th century

Political commentators in Spain, known as arbitristas, proposed a number of measures to reverse the decline of the Spanish economy. But in fact they did little to change the attitude of the nobility toward work. Contempt for retail trading was reinforced by its association with conversos and moriscos, who were distrusted by the Spanish general population because of their Jewish or Muslim background. The expulsion of Jews and Moors by Isabella and Ferdinand, though popularly received, was economically disastrous. In rural areas of Spain, heavy taxation of peasants reduced agricultural output as peasants in the countryside migrated to the cities. Many believed that the influx of gold and silver from the Americas was the cause of inflation, when only one fifth of the precious metals actually went into Spain. A more prominent internal factor was the Spanish economy's dependence of luxurious Merino wool, the demand of which was replaced by cheaper textiles from England and the Netherlands. The prosperous region of Spain was Catalonia, where peasants had more rights than the rest of Spain. That changed in 1650, when a plague broke out in Catalonia, undermining the local economy.