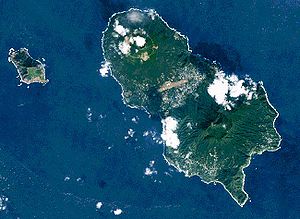 Hachijō-jima (八丈島?) is a volcanic Japanese island in the Philippine Sea.[1] The island is administered by Tōkyō and located approximately 287 kilometres (178 mi) south of the Special Wards of Tōkyō. It is the southernmost and most isolated of the Izu Seven Islands group of the seven northern islands of the Izu archipelago. The chief community on the island is Mitsune; other communities are Nakanogo, Kashitate, and Ōkago all of which are administratively part of the town of Hachijō under Hachijō Subprefecture of Tokyo Metropolis. As of 2009, the island's population was 8,363 people living on 63 km2. The highest elevation is about 850 m. Hachijō-jima is also within the boundaries of the Fuji-Hakone-Izu National Park.

Hachijō-jima is a compound volcanic island 14.5 km in length with a maximum width of 8 km. The island is formed from two stratovolcanoes. Higashi-yama (東山?), also called Mihara-yama (三原山?), has a height of 701 metres (2,300 ft), and was active from 100,000 BC to around 1700 BC, has eroded flanks and retains a distinctive caldera. Nishi-yama (西山?), also called Hachijō-fuji (八丈富士?)) is the highest point on the island and is the tallest peak of the entire Izu island chain, with a height of 854 metres (2,802 ft). The summit is occupied by a shallow caldera with a diameter of 400 meters and a depth of around 50 meters. It is rated as a Class-C active volcano by the Japan Meteorological Agency with eruptions recorded in recent history in 1487, 1518, 1522–1523, 1605 and 1606. In between these two peaks are over 20 flank volcanoes and pyroclastic cones.

Hachijō-jima has been inhabited since at least the Jōmon period, and archaeologists have found magatama and other remains. Under the Ritsuryō system of the early Nara period, the island was part of Suruga Province. It was transferred to Izu Province when Izu separated from Suruga in 680 AD. During the Heian period, Minamoto no Tametomo was banished to Izu Ōshima after a failed rebellion, but per a semi-legendary story, escaped to Hachijō-jima, where he attempted to establish an independent kingdom. Muromachi period documents indicate that the Kantō kubō appointed a daikan to govern Hachijō-jima on his behalf.

During the Edo period, the island became known as a place of exile for convicts, most notably Ukita Hideie, a daimyō who was defeated at the Battle of Sekigahara, but also for common criminals, especially repeat offenders and murderers. Its use as a prison island ended with the Meiji Restoration. During the Pacific War, the island was regarded as a strategic point in the defense of the ocean approaches to Tokyo, and in the final stages of the war, a base of operations for the Kaiten suicide submarines was founded on the southern coast. Following the end of World War II through the 1960s, the government made attempts to promote Hachijōjima as the "Hawaii of Japan" to encourage tourist development, and tourism remains a large component of the island's economy to date.

Hachijō-jima has a humid subtropical climate (Köppen climate classification Cfa) with very warm summers and mild winters. Precipitation is abundant throughout the year, but is somewhat lower in winter.

Hachijō-jima is accessible both by aircraft and by ferry. A pedestrian ferry leaves Tōkyō once every day at 10 p.m., and arrives at Hachijōjima at 9:00 a.m. the following day. Air travel to Hachijojima Airport takes 45 minutes from Tōkyō International Airport (Haneda).

Accommodation on Hachijō-jima is plentiful. There are many Japanese-style inns, hot spring resorts and several larger hotels. There is also a free campsite that is open year round; reservations are not required. The campsite has numerous BBQ pits, cold showers and full cooking facilities.

Hachijō-jima is popular with surfers, with three reef breaks and consistently warmer water than mainland Japan because of the warm water Kuroshio Current. Due to the fact Hachijō-jima is a volcanic island there are a few black sandy beaches. The main one is next to the main harbour of Sokodo. There are various skin diving/snorkeling points. Hachijō-jima's scuba diving points are many and varied. Nazumado is the best known, and is considered to be one of the top ten dive points in Japan. Sea turtles are common and underwater lava bridges are typical features for a volcanic island. Hachijōjima is also known for its hiking, waterfalls, and natural beauty. Other activities for visitors include visiting the botanical gardens, exploring wartime tunnels and hiking to the top of Hachijō-fuji.

Between the months of May to September seven varieties of bioluminescent mushrooms can be seen. Rainy season is the best time for viewing them.

Kihachijō silk cloth is woven on the island, and one of the workshops is open to tourists. There is also a free geothermal power museum.

Sport fishing could be a rewarding experience since there are many different locations allowing people to catch fish.

Hachijō-jima is famous for its sushi and kusaya. Local cuisine also makes use of the ashitaba plant in dishes such as ashitaba soba and tempura.

The Hachijō dialect is the most divergent from standard Japanese of all the Japanese dialects, as it is the only surviving descendant of Eastern Old Japanese. The number of speakers of the dialect is not certain, and it is on the list of endangered languages.

The town operates its public elementary and junior high schools.