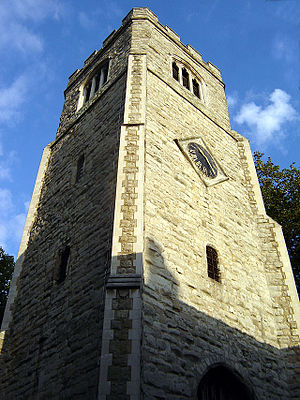 St Augustine's Tower – Dating back to the 13th century, this is Hackney Central's oldest building. It is all that remains of the original medieval parish church, which was demolished in the late 18th century (September 2005).

Hackney was a parish in the historic county of Middlesex. The parish church of St John-at-Hackney was built in 1789, replacing the nearby former 16th-century parish church dedicated to St Augustine (pulled down in 1798). The original tower of that church was retained to hold the bells until the new church could be strengthened; the bells were finally removed to the new St John's in 1854. See details of other, more modern, churches within the original parish boundaries below.

The vestry of the parish, in common with all parishes in England, was entrusted with various administrative functions from the 17th century. The parish vestry administered the Poor Law until 1837, until it became part of the Poor Law Union of Hackney. The ecclesiastical and civil roles of the parish increasingly diverged, and by the early nineteenth century they covered different areas. 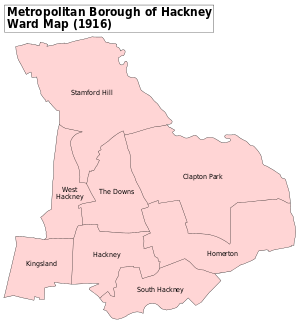 A map showing the wards of Hackney Metropolitan Borough as they appeared in 1916.

In 1889 Hackney was included in the new County of London, and in 1900 the vestry was dissolved with the parish becoming the Metropolitan Borough of Hackney. The civil parish was abolished when the borough became part of the London Borough of Hackney in 1965.

The boundaries of the civil parish were identical to the ancient parish, and it covered 3,289 acres (13.3 km2). The populations recorded in National Censuses were: 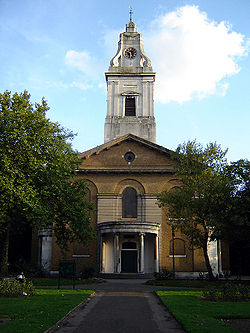 The ancient parish, was originally dedicated to St Augustine, but by c.1660 it had been rededicated to St John the Baptist and usually referred to as St John at Hackney.[6] It was in the Diocese of London. From 1825, as the population of Hackney increased, a number of new parishes were formed:[7]

In addition, as the population of neighbouring areas increased, parts of Hackney parish were included in new parishes: