Hagerman Fossil Beds National Monument near Hagerman, Idaho, contains the largest concentration of Hagerman horse fossils in North America. The fossil horses for which the Monument is famous have been found in only one locale in the northern portion of the Monument called the Hagerman Horse Quarry. The 4,351-acre (17.6 km2) Monument is internationally significant because it protects the world's richest known fossil deposits from the late Pliocene epoch, 3.5 million years ago. These plants and animals represent the last glimpse of that time that existed before the Ice Age, and the earliest appearances of modern flora and fauna. This is also significant because the fossils present during this period of the Pliocene represent species which were alive during the early stages in the evolution of man, albeit on a different continent. The fossil beds were designated a National Natural Landmark in 1975.[3]

Many other species are also found in the fossil record, including mastodons, dirk tooth cats and bone crushing dogs (Borophaginae), as well as various species of fish, frog, vole and beaver. 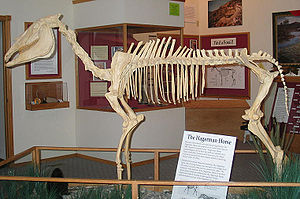