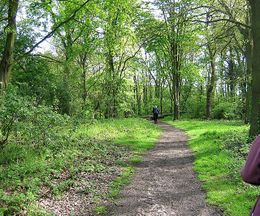 Woodland Path — a public footpath in the park. 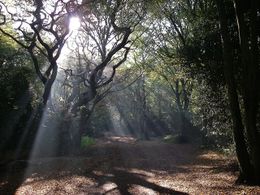 The forest path into Hainault Forest from Lambourne End, on a November morning

With an area of 136 hectares (336 acres), Hainault Forest Country Park is a Site of Special Scientific Interest.[2]

The Redbridge section of the Park is being developed by the Redbridge Council as a country park. The Essex section is managed by the Woodland Trust, who are contracted to do so by its owners, Essex County Council.[1][3]

Hainault Forest is one of the remaining sections of the former Forest of Essex in England. Epping Forest and Hatfield Forest are other remaining examples. The forest belonged to the abbey of Barking until the dissolution of the monasteries;[4] it extended northwards to Theydon Bois , east to Havering-atte-Bower, on the south to Aldborough Hatch,[5] and westwards to Leytonstone.[6] In a survey made for Henry VIII in 1544 its extent was some 3,000 acres (12 km2).[7]

The forest land was condemned as waste by an Act of Parliament, 1851, disafforested, the deer removed, and 92% of the old growth forest cut down. The land became very poor quality agricultural land and subsequently a significant proportion of that has been built on.

The destruction was deplored by Sir Walter Besant in his works on London: the forest is also the setting for his novel All in a Garden Fair.

The Hainault Forest Country Park protected areas include: open space parklands — with numerous public footpaths and a large lake; the Hainault Forest Golf Club; and Fox Burrow Farm — which is used in part for preserving rare breeds of animals.