Haitians (French: haïtiens, Haitian creole: ayisyen) are the inhabitants and citizens of Haiti. A Haitian can be also a person born abroad to a Haitian parent or a foreigner living in Haiti who acquired Haitian citizenship.

According to the Constitution of Haiti, a Haitian citizen is:

The Haitian Constitution of 2012 re-legalizes dual citizenship, allowing for Haitians living abroad to own land and run for Haitian political office (except for offices of president, prime minister, senator or member of the lower house of Parliament). 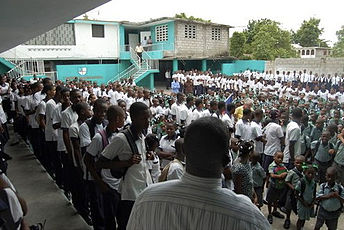 Haiti is a majority black country (80% are of mixed African and other racial makeup),[36] however many peoples of different ethnic and national backgrounds have settled and had major influence in the country's 200+ year history such as Poles[37][38] (Polish legion), Jews |title=Haiti |publisher=Jewish Virtual Library |accessdate=2014-02-07}}</ref>, Arabs[39] (from the Arab diaspora), Chinese,[40] Indians,[41][42] Spanish, Germans[43][44] (18th century and World War I), Italians,[39] and French, most marrying into the majority black populace and in turn yielding mulattoes (many of whom are prominent in Haitian society).

The official languages of Haiti are French and Haitian Creole.

Traditionally, the two languages served different functions, with Haitian Creole the informal everyday language of all the people, regardless of social class, and French the language of formal situations: schools, newspapers, the law and the courts, and official documents and decrees. However, because the vast majority of Haitians speak only Creole, there have been efforts in recent years to expand its uses. In 1979, a law was passed that permitted Creole to be the language of instruction, and the Constitution of 1983 gave Creole the status of a national language. However, it was only in 1987 that the Constitution granted official status to Creole.

The music of Haiti combines a wide range of influences drawn from the many people who have settled on this Caribbean island. It reflects French, African rhythms, Spanish elements and others who have inhabited the island of Hispaniola and minor native Taino influences. Styles of music unique to the nation of Haiti include music derived from Vodou ceremonial traditions, Rara parading music, Twoubadou ballads, Mini-jazz rock bands, Rasin movement, Hip hop Kreyòl, Méringue,[45] and Compas. Youth attend parties at nightclubs called discos, (pronounced "deece-ko"), and attend Bal. This term is the French word for ball, as in a formal dance.

Compas, short for compas direct, is a complex, ever-changing music that arose from African rhythms and European ballroom dancing, mixed with Haiti's bourgeois culture. It is a refined music, with méringue as its basic rhythm. In Creole, it is spelled as konpa dirèk or simply konpa. It is commonly spelled as it is pronounced as kompa.[46]

Until 1937, Haiti has had no recorded music, until Jazz Guignard was recorded non-commercially. One of the most popular Haitian artists today, is Wyclef Jean. Wyclef Jean, however, left the country before his teenage years. His music is somewhat hip-hop mixed with world music. 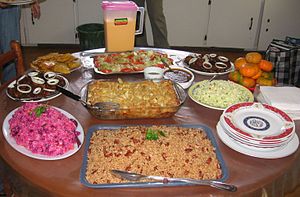 A table set with Haitian cuisine

Haitian cuisine originates from several culinary styles from the various historical ethnic groups that populated the western portion of the island of Hispaniola. Haitian cuisine is similar to the rest of the Latin-Caribbean (the French and the Spanish-speaking countries of the Antilles), however it differs in several ways from its regional counterparts. While the cuisine is unpretentious and simple, the flavors are bold and spicy that demonstrate a primary influence of African culinary aesthetic, paired with a very French sophistication.

Haiti is similar to the rest of Latin America, in that it is a predominantly Christian country, with 80% Roman Catholic and approximately 16% professing Protestantism. A small population of Muslims and Hindus exist in the country, principally in the capital of Port-au-Prince.

Vodou, encompassing several different traditions, consists of a mix of Central and Western African, European, and Native American (Taíno) religions is also widely practiced, despite the negative stigma that it carries both in and out of the country. The exact number of Vodou practitioners is unknown; however, it is believed that a small amount of the population practice it, often alongside their Christian faith. Some secular Christians also have been known to participate in some rituals, although indirectly.